I liked most of the Lenten messages from Catholics this year. There seemed to be a healthy shift away from regarding Lent as a dietary season into a contemplative one. There was much to inspire in what I heard, from the preaching in church to media Catholics rediscovering the real meaning of Lent, which is about emptying ourselves in order to be filled with God. 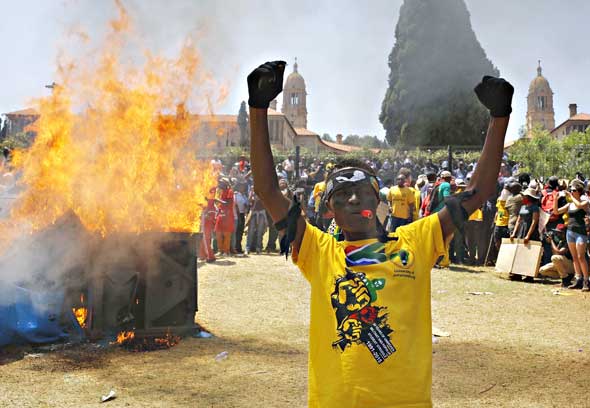 A protestor demonstrates in front of a fire at the Union Buildings in Pretoria in October. (Photo: Kim Ludbrook, EPA)

But I would also like to hear more Catholics regarding social justice as the centre of our endeavour to be Christ-like. After all, Christ made it clear that as much as you did it to these you did it to me. St John also reprimands the hypocrisy of loving God whom we have never seen, while hating our fellow beings we see every day (1 John 4:20).

The Jesuit theologian Karl Rahner once wrote: “We hear today of something called ‘political theology’. This is a good name for a theology that seeks to clarify the social dimension of all the realities of faith. The grace of confirmation is the strength to take cognizance of a Christian’s responsibility for Church and society. Truly, then, confirmation is expressly ordered to the ‘political’ responsibility of the Christian as Christian.

“Recalling our confirmation means reminding ourselves that a Christian may not treat his or her Christianity simply as a ‘privatistic’ [self-centred or narcissistic] matter of personal interiority.”

Fr Rahner’s words, to me, are directed to those Christians who think their faith is a private matter that does not require them to be involved in societal issues.

I sometimes despair at the dim visibility of the Catholic Church in socio-political issues of our era.

Of course, different structures of our faith, like the Catholic Parliamentary Liaison Office (CPLO), the Jesuit Institute, Justice & Peace and the Goedgedacht Forum, often immerse themselves in the dialogue of our public square.

But I find it still difficult to see the Church at large standing hand in hand with those who feel the injustices of the modern system, like the students rising against high school fees, and the poor in general.

Yet, the Church in its teachings is clear about the preferential option for the poor, even if sometimes things still leave much to be desired in implementation.

Lent came this year during a season of anger and aggression in our country. It would seem everyone is nursing one grudge or another, from the students who have just woken up to the violence of material poverty that thwarts the dreams of the poor to your insouciant housewife who is angry because all the toyi-toyi riots and the burning of things is making her late for her yoga class. Even the racists have raised their heads above the parapet.

There is a general sense of our country being in the race to the bottom; what with the predatory networks of patronage and blatant corruption in the capture of state resources that is driven from the highest office of the land.

These are not times for the Church to be overly subdued into silence and impotence by the need to guard the separation of powers. These are mostly moral issues that require her strong guiding voice.

Socio-economic inequality is a time-bomb, and yet it is being spoken of as if it’s just a temporal inconvenience that will soon go away with the hoped-for economic growth.

The country’s economy has entered what the economists call secular stagnation—a condition of non-economic growth, where the rich upper structure are the only people making profit, which they then save without reinvesting it back into the economy.

And the middle and poor classes can’t make ends meet, meaning they can’t spend to revitalise the economy.

Other countries that have been in a similar situation for a long time, like Japan, have adopted desperate measures of adjusting their interest rates to negative value, in their attempts to mitigate the situation, while our Central Bank keeps raising it.

And we still base our planning on the National Development Plan which envisages a 5% economic growth—while in real terms we have hit below 1%. This is madness. The major problem is that the people who got us into this mess are the ones the government is now listening to in order to get us out. Talk about the foxes guarding the chicken coop.

The consistent message of Catholic Social Teachings (CST) is that, even when it happens, societies do not flourish on economic growth alone. The CST acknowledge that free market capitalism is good for income growth and creating a large economic surplus — but it also creates dangerous economic inequalities that require government intervention for mitigation.

The consequence is always that the poor who suffer the most, and when they are unable to see a path towards betterment, they, like Samson, tear down the pillars of their prison to kill themselves together with their enemies.

This is what is currently at seed in our country. At the root of why our government is so inadequate, or lacks the political will, to properly intervene with economic policies that make real economic redistributive change, is the capture of the state by big capital.

If I were the chairperson of the National Development Plan, I would instruct its commissioners to read the history of Catholic social thought regarding the economic order.

It anticipates the current South African situation, and provides sound solutions in what is termed Democratic Capitalism.

The very survival of democratic capitalism depends on a culture rooted in transcendent truth. But, as John Paul II suggests in his 1991 encyclical Centesimus Annus, “in a world without truth, freedom loses its meaning, the market loses its efficiency, and democracy yields to statism and even totalitarianism.”

Our youth is starting to riot against even the callous, silent oppression of the majority by market fundamentalism . It is a threat that may bring the country into the brink.

Pray it does not get to that. But if it is the necessity cup we must drink to awaken us from the slumber of complacency, then pray for strength to undergo what is necessary, so we may enter the real new dawn for our country.