‘Mercy is the key to understanding the mystery of man’

Authentic religions help people understand that they are, in fact, loved and can be forgiven and are called to love and forgive others, Pope Francis said.”We thirst for mercy, and no technology can quench that thirst,” the pope told Jewish, Christian, Muslim, Buddhist, Sikh and other religious leaders. 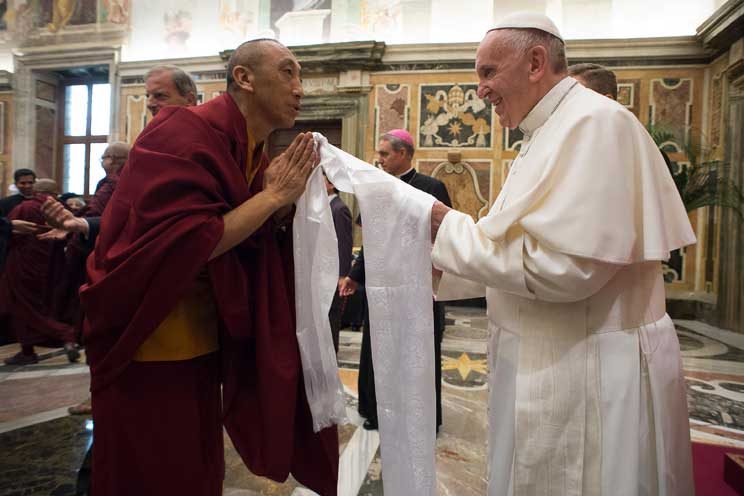 Pope Francis greets a Buddhist monk during a audience with religious leaders at the Vatican. (CNS photo/L’Osservatore Romano)

“We seek a love that endures beyond momentary pleasures, a safe harbour where we can end our restless wanderings, an infinite embrace that forgives and reconciles,” the pope told the leaders during an audience at the Vatican.

The leaders were in Rome for a conference on religions and mercy organised by the Pontifical Council for Interreligious Dialogue and the International Dialogue Centre, which was founded in 2012 by Saudi Arabia, Austria and Spain with the support of the Holy See.

“Sadly,” the pope said, “not a day passes that we do not hear of acts of violence, conflict, kidnapping, terrorist attacks, killings and destruction. It is horrible that at times, to justify such barbarism, the name of a religion or the name of God himself is invoked.”May there be clear condemnations of these iniquitous attitudes that profane the name of God and sully the religious quest of mankind,” he said.

Religions are called to bear “the merciful love of God to a wounded and needy humanity,” he said, and to be “doors of hope helping to penetrate the walls erected by pride and fear.”Mercy, Pope Francis told the group, is the foundation of every authentic religion. It is the truest revelation of who God is, but also “the key to understanding the mystery of man, of that humanity which, today too, is in great need of forgiveness and peace.

“While many people seem to prefer living as if God does not exist, the pope said he believes that underneath human bravado, there is a “widespread fear that it is impossible to be forgiven, rehabilitated and redeemed from our weaknesses.

“The Catholic Church’s Year of Mercy, which will close Nov. 20, was meant to help people understand that God’s mercy and forgiveness are accessible to all and that, experiencing God’s mercy, they are called in turn to forgive and show mercy to others, he said.

Professing faith in God’s mercy, he said, means very little unless one backs up that profession with actions of love, service and sharing.

Engaging in interreligious dialogue and encouraging one’s faithful to meet and get to know their neighbours of other religions are part of preaching mercy, he said. Dialogue helps eliminate “closed-mindedness and disrespect, and drives out every form of violence and discrimination.”Dialogue is pleasing to God and constitutes an urgent task,” he said, because it responds to the need to make peace in societies and, “above all to the summons to love which is the soul of all authentic religion.”

“To bow down with compassionate love before the weak and needy is part of the authentic spirit of religion, which rejects the temptation to resort to force, refuses to barter human lives and sees others as brothers and sisters, and never mere statistics,” the pope said.

Pope Francis also insisted that the mercy believers are called to share also must be extended to the Earth, “which we are called to protect and preserve from unbridled and rapacious consumption.

“Religious leaders, he said, must educate their members in the religious obligation of respect for the world God created and encourage “a simpler and more orderly way of life in which the resources of creation are used with wisdom and moderation, with concern for humanity as a whole and for coming generations, not simply the interests of our particular group and the benefits of the present moment.” By Cindy Wooden Catholic News Service

While donation campaigns and charitable contributions for the needy are important, true Christian charity involves a more personal touch, Pope...