Are We Reaching the End of Compromise Politics?

The rapid evolution of the Fees Must Fall (#FMF) student movement — right to the brink of a revolution — has caught many, including the government, by surprise. 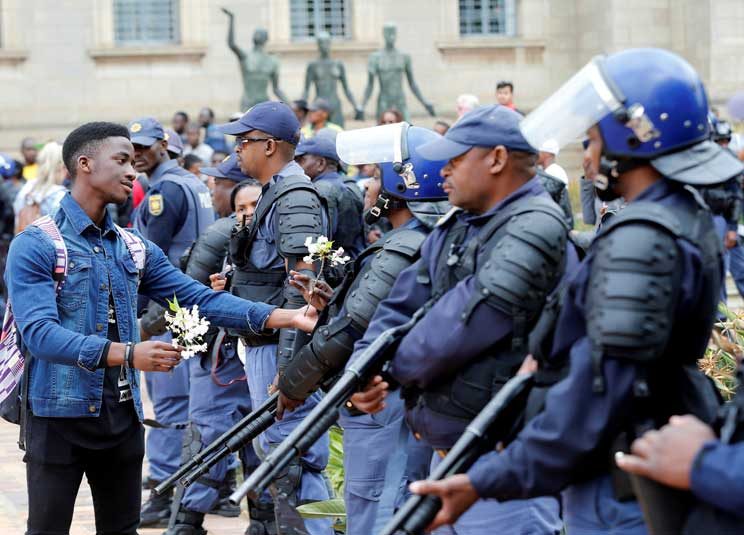 A student offers a flower to a police officer after clashes at the University of the Witwatersrand in Johannesburg. In his column, Mphuthumi Ntabeni attempts to understand what the media fails to explain. (Photo: Siphiwe Sibeko, Reuters/CNS)

What is clear is that South Africa has reached the end of its era of compromise politics. Every sector of our society has now become confrontational and, regrettably, violent.

#FMF has always, according to the students, been about rising up against the traumas of the country’s apartheid legacy: economic exclusion, African cultural decimation, patriarchy, extant institutional racial hegemony and general pathologisation of a black voice.

But our media, itself caught like a rabbit in the headlights, chose to emphasise only the issue of free tertiary education.

The government’s response has hardened, choosing violent suppression through the police over the option of a reasoned encounter which might have channelled the anger of these children to something positive.

Instead the state security forces took advantage of the declining public sympathy for students by arresting them, apartheid style, from their individual residences at ungodly hours.

There’s no denying that at the root of the #FMF movement are the deepening socio-economic crises: massive youth unemployment; the largest economic inequalities in the world; debt-driven consumption; unchanged apartheid spatial geography; a corporatised agriculture system that hollows rural communities and escalates urbanisation; the stubbornly poor public education system, and so on.

The one question few are asking is this: Why has this conflict not spilled over to the other areas of exclusion, such as Central Business Districts, suburbs, commercial farms and so on?

The answer can be only because the majority of even the excluded still believe in the Rainbow Nation project, despite the contrary evidence of their lived lives. That is commendable.

This might mean #FMF is more of a return to participatory democratic activism. It even carries with it the faults of that struggle, like the ungainly tactics of violent confrontation and the seeming fatalistic paradox of destroying the resources you’re fighting for.

The movement’s major goal is not to just upset the status quo, but to annihilate it. The acts of the students defeat common sense until you understand that their major objective is a refusal to be assimilated into the hegemony of the reigning system, which they regard as being callous and inhumane.

Those of us who operate under the dictates of “normalcy”, supporting the system even as we agree that it needs to be transformed, see their actions as madness. You hear it in our favourite saying: “The violence takes away from the legitimate struggle.”

But the government provides neither answers nor solutions.

The South African government spends far too little on tertiary education, only 0,7% of its GDP, where countries like Cuba spend 4,47% and even Ghana 1,45%.

And South Africa could afford free tertiary education, if the political will to do so was there. Several models have been shown that it is possible.

A universal reduction in the fee burden to students can be achieved by calling upon the state to restore its proportional contribution to the system to 50%. Others are calling for the wealth tax on the richest 10% of the population, whose fortunes were mostly made under apartheid anyway. Some say let’s create a dedicated Sovereign Wealth Fund, like other nations that are rich in natural mineral resources, by imposing mandatory contributions from the extractive economy.

Had the government been competent enough, even half of the illicit funds that leave the country through white collar corruption, price listing and other tax dodging mechanisms would pay for our free education and more.

All this would easily carry the burden of our infrastructure away from ordinary taxpayers. But the problem is not just lack of political will, but also the incompetence and corruption of our government.

Couple that with the dearth of ideas within the ruling party, which does not know how to properly respond to the realities of our modern era. They’re still stuck in the dead ways of a liberation movement.

This is the major reason why we are where we are, despite our august beginnings almost 23 years ago.