In Lent, Remember the Gift of Tears 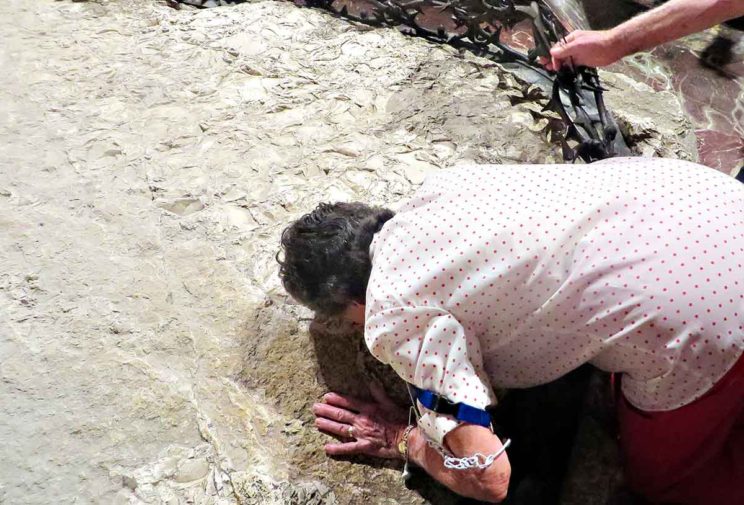 A pilgrim kisses the Rock of the Agony in the church of All Nations at Gethsemane in Jerusalem. It is on this rock that Jesus made his tearful prayer before his arrest.

Do not be afraid to cry, for our tears can be translated as a message from the heart, advises FR RALPH DE HAHN in this Lenten reflection.

There are natural tears from our own emotional makeup, as well as artificial tears, not only in theatre, but also by insincere humanity. There are plenty of tears shed in Shakespearean and Greek drama as well as in hilarious comedy.

Moving through the pages of sacred scripture we can certainly imagine the tears spent by the great prophets, as also with kings Saul and David and the women — Eve, Sara, Ruth, Rahab, Miriam, Rachel, Mary and Martha, Elizabeth, Mary of Magdala, and so many more.

In his life on earth, Jesus wept on many occasions: when at prayer on the hills, when his friend Lazarus died, when he looked upon Jerusalem and foretold its destruction, and certainly as he suffered the agony in the Garden of Gethsemane before his arrest.

Crying is not a sign of weakness, cowboys may shed tears. It is not unmanly to weep.

Tears can be translated as a message from the heart, even from the very soul of one crying in the wilderness. Listen to the cry of the stubborn Peter, seeing his master being led to the torture chambers — when the cock crowed, “and he wept bitterly”.

The loud cries of triumph from the brave women — like Deborah, Jael, Esther, Abigail and Hannah — did not come about without much pain and weeping.

The women of Jerusalem wept for the Lord, so did the wife of Pontius Pilate.

The young girl caught in the act of committing adultery was in tears, ashamed and fearful, and there was also a cry for pity.

The one leper of the ten who found himself healed returned to the Lord with tears of thanksgiving. The man born lame who was suddenly healed by Peter and John at the Temple’s gate must have danced that first dance with joyful tears.

And what of Mary, the mother of the suffering and abused Son; was there ever such sorrow as experienced by such a mother, because of such a Son? And what joyful tears when he appeared to his mother after his glorious resurrection!

When the holy women came to the tomb that Sunday morning with the ointments, they were greeted with the words: “Why are you weeping?” And their deep sorrow was eventually turned into an inexplicable joy.

And all through scripture we find this play between tears of sorrow and those of ecstatic joy; both undeniably present in the fulfilling of our human vocation.

How beautiful to confess one’s sins before the whole Church, in that humble act of reconciliation, when the lips are pleading, the heart is opening and the eyes are moist!

We can hear the ancient poets still sing in praise of our tears — for “we are thankful that you run, though you trickle in the darkness, you shall glitter in the sun”.

We often do not see the richness of our sad moments, when those dark clouds enfold us, and the cross of Jesus beckons us; we are called to persevere in faith and with undying hope, for the sun is always alive behind those ugly clouds.

For see, the rainbow would not shine if rain refused to fall, and the eyes that cannot weep are the saddest eyes of all.