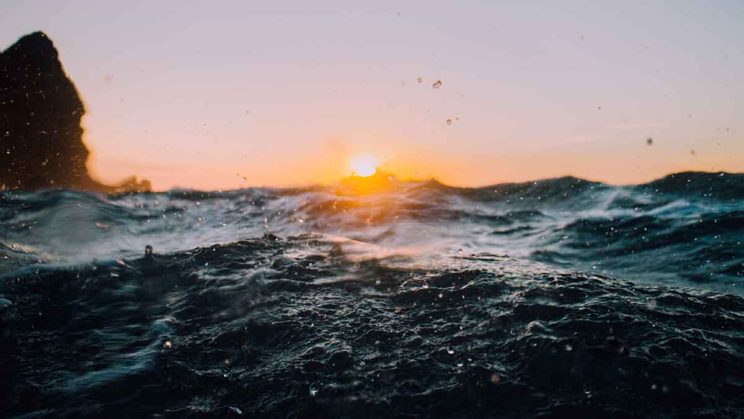 I often feel frustrated by the lack of silence in my life because I delude myself into believing that if I had more silence, I would be more contemplative and open to divine inspiration. Most of the time prayer is a dry spell of presenting myself before God and waiting to hear.

Better prayers I have had came to me without my volition, in unexpected places; such as on the bus, at dusk when going home after a long day.

Lately have I discovered that the best way to pray is to offer your life to God as a prayer. Often we think this means a cloistered life. But, as the English writer Dorothy Sayers (1893-1957) taught us, a contemplative life is also possible for lay life.

I am lucky enough to work close to a cathedral, and so sometimes I’m able to attend midday Mass. Still my prayer at that time is a crowded zoo of floating distractions, personal concerns, the daily grind and all. So more recently I learnt to offer my distractions as prayer, and found peace. So it was rather consoling to observe that even those who dedicate their whole lives to the life of prayer and silence suffer the same frustrations as myself.

I recently watched a documentary film called No Greater Love by Michael Whyte. You cannot put a value on prayer, like you can a product, it still remains a mystery, says its premise.

Whyte says it took him ten years of correspondence before he was given the unprecedented access to the monastery of the Most Holy Trinity in London’s Notting Hill. The monastery of the Discalced Order of Carmelite Nuns was founded in 1878.

As most Catholics know, Carmelite nuns lead a cloistered life dedicated to prayer and contemplation, rarely leaving the monastery except to visit a doctor or dentist. Silence is maintained throughout the day with the exception of two periods of recreation, as Whyte put it.

No Greater Love gives a unique insight into the cloistered life of the Carmelites by interweaving a year in the life of the monastery with the daily rhythms of Divine Office and work. One is shocked into reality at how mundane the making of the Holy Bread for Communion is. Like every other job, it follows a factory line: dough-making, baking on steel plates, cutting with perforating machines, shipment packing, and so on.

The film follows a year in the life of a novice who is professed and one of the senior nuns who dies. Though mainly an observational film, there are several interviews which offer insights into the lives of the nuns. One of them, Sr Christine Marie of John of the Cross, says: Silence echoes the eternal word. It acts to fulfil the unfailing power of God and is full of life’s expectancies, and there’s redeeming grace in it.

You get to understand that a cloistered life is not place of escape; in fact it is where you come face to face with the reality of yourself and most of us can’t stand that. This is why we invent all sorts of distractions.

The greatest trick the devil has achieved is to use god to avoid God. That is, to use pious distractions, like false prayer, empty piety, pompous devotion, unlived words, and so on. Maybe this is the danger in the cloistered life, and these Carmelite nuns are well aware of it, I wondered how they could convey this message clearer today with all the born-again churches springing out everywhere like mushrooms. I believe these are themselves part of the movement of the Holy Spirit, but the danger of the Pharisees seems more prominent with them.

It is humbling to see moments of doubt even from the senior nuns. But their belief in the power of prayer takes them through everything.

She says she sometimes thinks: What if the atheists are right? The simplicity of her answer is amazing: Then there won’t be anyone to tell me so, she laughs softly, but if I am right there will be someone to meet me on the other side.

That’s faith stripped bare to its fundamentals. To quote St Paul: If Jesus Christ is not risen, then we preach in vain. Updated from 2011