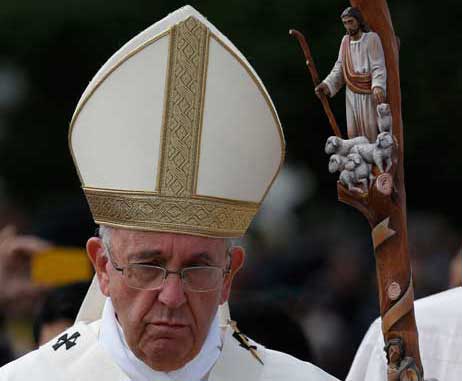 Pope Francis carries a crosier as he arrives to celebrate Mass in Christ the Redeemer Square in Santa Cruz, Bolivia. Christ the Good Good Shepherd is depicted on his pastoral staff. (CNS photo/Paul Haring)

The pope and the world’s bishops together make up one college of authority in the Church, known as the magisterium. In what way, then, can the pope be given the privilege of being called Supreme Pontiff? How is he supreme? S Ndiki

It may surprise you, but your question is similar to one that exercised the minds of the world’s bishops during the sessions of Vatican II (1962-65).

Every bishop at the council accepted the Church’s teaching that St Peter was the head and leader of the twelve apostles. Everyone accepted that their successors, the bishops of Rome and the world’s bishops, were their legitimate successors. And everyone agreed that Christ gave them as a body his own authority to teach what he had commanded (Mt 16:16; Jn 21:15: Mt 28:18). This was nothing new.

What was new was the question of clearly explaining and accepting the precise nature of the relationship between the pope’s primacy and the teaching authority of the rest of the world’s bishops.

The council made it clear that there is only one teaching authority, and that is the entire college of bishops in solidarity with its head the bishop of Rome. Without being in communion with the Roman pontiff, the bishops together would have no authority.

This was one of the big features of Vatican II, although it also acknowledged the jurisdiction each bishop has in his own right.

All along it was known that the pope, the bishop of Rome, was the head of that college and that he could define divinely revealed dogmas when he spoke as pastor and teacher of all the Church. Once he had defined a teaching as authentic doctrine in matters of faith or morals, this had to be held by the whole Church, because of Christ’s words in Matthew 16:16-19.

There could not be two holders of supreme authority in the Church, as if the pope was on one side and the bishops on the other. As a single college holding firmly to Christ’s truth, there could be no such division.

It is advisable to remember that the source of the Church’s magisterium and its ultimate measure is the revelation given it by Jesus Christ. This revelation ceased with the death of the last of the apostles. The magisterium therefore cannot transmit anything new, but only what it safeguards intact and hands down from Christ without error, with the assistance of the Holy Spirit in the here and now of history.

By virtue of his being head teacher and pastor of the Church, and also as its pivotal centre of unity, the pope alone has the final word when there is any doubt or conflict in regard to the Church’s faith and moral teaching.