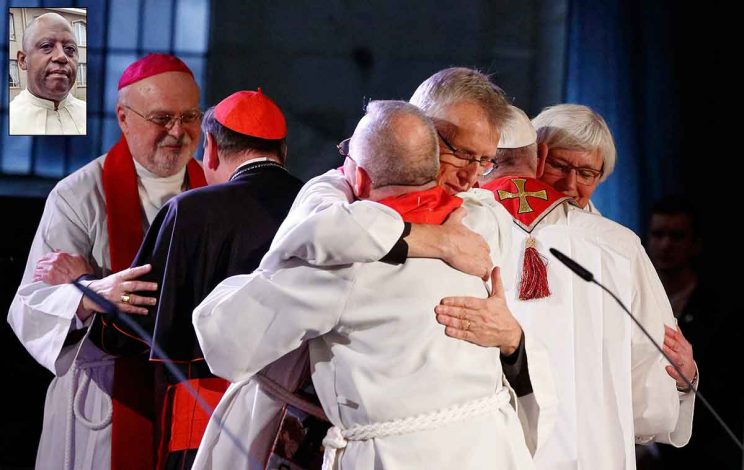 Pope Francis, at the right in this photo, embraces Archbishop Antje Jackelen, primate of Sweden’s Lutheran Church in Sweden, at an ecumenical prayer service at the Lutheran cathedral in Lund last year. Great strides have been made in the Catholic Church’s dialogue with Protestants, as Bishop Victor Phalana (inset) explains in his article. (Main photo: Paul Haring/CNS)

For almost five centuries, Catholics and Protestants were in conflict. Today, they seek unity in Christ. BISHOP VICTOR PHALANA outlines how far we have come, and what parishes can do to promote this unity.

It was a Saturday, that October 31 in 1517, when the Augustinian monk Martin Luther walked to a church in the German town of Wittenberg and nailed a document to its wooden doors.

This document, named the “95 Theses”, lit the fuse for what would become the Reformation.

From that moment nearly 500 years ago, the Reformation spread quickly and led to much violence, killing thousands in places like France and Germany.

More recently, especially since the Second Vatican Council, age-old sectarian sentiments have softened, and ecumenical dialogue between Catholic and Protestant churches has made giant strides.

I hope to explain how far we Catholics have come on our journey with the denomination that goes straight back to Luther: the Lutheran World Federation (LWF).

The Catholic-Lutheran dialogue was based on the historic “Joint Declaration on the Doctrine of Justification” which our two churches signed in Augsburg, Germany on October 31, 1999.

There were South African connections present at that historic moment. The declaration was signed by Cardinal Edward Cassidy as president of the Pontifical Council for Promoting Christian Unity. Until just a few years earlier, the Australian had served in Pretoria as the apostolic nuncio. Also present at the signing was Rev Dr Ishmael Noko, a South African who at that time was the general-secretary of the Lutheran World Federation.

In the Joint Declaration, we all agree that “by grace alone, in faith in Christ’s saving work, and not because of any merit on our part, we are accepted by God and receive the Holy Spirit, who renews our hearts, while equipping us and calling us to good works”.

Here we acknowledge that the good works are a genuine response to grace not the cause of it.

The significance of this agreement cannot be overestimated, dealing as it does with a question right at the heart of Christian faith and theology: the question of how we are saved. Justification means that Christ himself is our righteousness

Now we can agree that “justification is the work of the Triune God. The Father sent his Son into the world to save sinners. Justification means that Christ himself is our righteousness, in which we share through the Holy Spirit in accord with the will of the Father. Faith is itself God’s gift through the Holy Spirit who works through Word and Sacrament in the community of believers and who, at the same time, leads believers into the renewal of life which God will bring to completion in eternal life.”

We rescinded the formal condemnations we had issued against one another in the 16th century.

In our search for unity, we consider carefully what is essential within our respective traditions. We acknowledged our communions’ divergent understanding of sacraments but agreed to explore the issue further. We discussed the issue of Eucharistic hospitality, or intercommunion.

For Catholics, Communion is only extended to those with whom there is full communion in faith, life and doctrine. For us Communion is not only commemorating Christ’s table fellowship with sinners. To us it expresses fullness of ecclesial communion.

Pope Francis quoted from Methodist co-founder John Wesley’s “Letter to a Roman Catholic” when he addressed a delegation at the opening of a new Methodist Ecumenical Office in Rome: “If we cannot as yet think alike in all things, at least we must love alike.”

The pope continued: “It is true that we do not as yet think alike in all things, for example on issues regarding ordained ministries and ethics. Much work remains to be done.

“However, none of these differences constitute such an obstacle as to prevent us from loving in the same way and offering a common witness to the world.”

We are in dialogue with the churches with whom we have many things in common. We recognise each other’s baptisms. The central understanding of faith is the same. We hold on to a theology of grace that sees God reaching out in love to the human community. We acknowledge that we have the same number of New Testament books but we do differ on the number of books found in the Old Testament. We can pray together to our triune God.

The Riches of Other Churches

Our Interaction has opened us to riches of other churches. We see, for example, how important lay leadership is in these churches. Lay people are not treated as “third-class citizens”.

They, too, are fascinated by our devotions, the lives of the saints, the centrality of the Eucharist and Church structures. We need to grow together from a fuller reception of each other’s authentic insight into Christian faith and authentic gifts to a vision of the Catholicity of the Church, fuller and richer than its previous embodiment in various communions.

We must acknowledge the manifold yet unified activity of the Holy Spirit throughout the ages. We must grow in our obedience to and internalisation of the Word of God. We must join hands in playing a prophetic role in our country.

The journey towards unity had its greatest highpoint yet last year on October 31 when Pope Francis travelled to solidly Lutheran Sweden.

In the city of Lund, the Roman Catholic Church jointly held an ecumenical commemoration of the Reformation. Locally co-hosted by the Church of Sweden and the Catholic diocese of Stockholm, the event highlighted the solid ecumenical developments between Catholics and Lutherans and the joint gifts received through dialogue, particularly in anticipation of this year’s 500th anniversary of the Reformation.

It was held in two parts. The first was a common prayer service in Lund’s 12th-century cathedral, led by Pope Francis, LWF president Bishop Munib Younan and LWF general-secretary Rev Martin Junge. The cathedral service followed the Common Prayer liturgical guide, based on a Lutheran-Catholic dialogue report titled “From Conflict to Communion”.

Lund, on the southern tip of Sweden, is widely regarded as the gateway of the first missionaries to Sweden (who, of course, were Catholics). The other part was a public event at Malmo Arena.

Malmo, a city of 300000, was founded as a landing berth for the bishop of Lund. It became one of the first cities in Scandinavia to fully convert to Lutheranism, between 1527–29. Malmo Arena was the stage for activities focusing on the commitment to common witness and service of Catholics and Lutherans in the world.

At the celebration, Pope Francis urged the two churches to move towards greater cooperation and dialogue after centuries of division. The pope also used this time to ask for forgiveness for divisions perpetuated by Christians from the two traditions, and emphasised the need for the healing of memories.

The Holy Father issued a reminder that “division is a scandal; unity is a journey”. “Unity is a gift of God, let us pray for it. Human power alone and capacities cannot achieve this holy objective: the reconciling of all Christians in the unity of the one and only Church of Christ,” the pope said.

This is Christ’s Will for his Disciples

I wish to encourage our parishes to continue to move closer to other churches. We can share the Word of God, be constantly in prayer with and for each other, and work together for the common good and for peace and justice where we live.

Ecumenism is not optional. It is as intrinsic to being a Christian as mission and evangelisation are. To attempt to be the Church of Jesus Christ without unity is to disobey Christ. We must recover the urgency of Jesus’ priestly prayer: “May they be one” (Jn 17).

We must take seriously the words of Pope Francis at Lund last year: “The divisions among Christians go against Christ’s will for his disciples.”

I call on all Catholics to respond generously to the invitations coming from our Dutch Reformed, Lutheran, Methodists and Presbyterian brothers and sisters who have to do with the 500th commemoration of the Reformation. Let this be part of the healing of memories that Pope Francis called for and let us find ways of strengthening our unity.

I make a special appeal to the youth. May our youth learn to respect their fellow youths in other churches and learn to collaborate in common causes. They do not have the baggage of prejudice and wounded memories that the older generation still carries. Let them start now, to dialogue, to share and witness without fear or prejudice.

We can find a common ground and be seen to walk hand in hand in faith in Christ Jesus our Lord.

Bishop Victor Phalana is the bishop of Klerksdorp and chairman of the Department of Ecumenism and Interreligious Dialogue of the Southern African Catholic Bishops’ Conference.