When An Ex-Pope Speaks 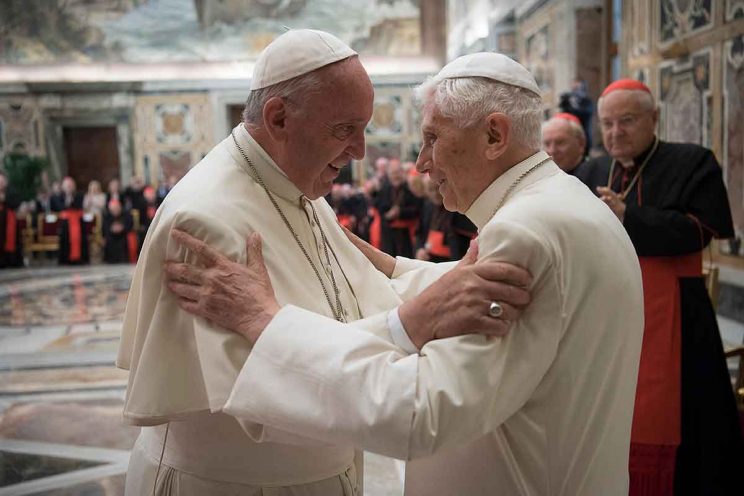 When retired Pope Benedict XVI sent a personal message to be read at the funeral of Cardinal Joachim Meisner in Cologne, it was received with loud applause by the congregation.

However, one sentence in what otherwise was a touching tribute to his friend has given rise to a perception that the pope emeritus was criticising his successor, Pope Francis.

In his message — read at the funeral of a critic of Pope Francis — Benedict wrote: “We know that this passionate shepherd and pastor [Cardinal Meisner] found it difficult to leave his post, especially at a time in which the Church stands in particularly pressing need of convincing shepherds who can resist the dictatorship of the spirit of the age and who live and think the faith with determination.”

Given that Cardinal Meisner was one of the four cardinals who compiled their dubia on a point of doctrine — a rallying point for the opposition to Pope Francis — Benedict’s words can be reasonably interpreted as a barely disguised critique of the present papacy and those Church leaders who are following the Holy Father’s lead in responding to the signs of the times.

It may not have been the intent of the pope emeritus to issue a public critique, but even then, surely it must have been obvious to him and to his aide, Archbishop Georg Gänswein, who read out the message in Cologne, that this passage could well be understood as such.

He has thrown open the doors of the Church, and told its pastors to go out where they are needed, to “smell like the sheep”, and engage with modern society.

The archbishop’s protests that those who are using that statement to pit one pope against another are “stupid” and living a “fantasy” is unconvincing. At the very least, the sentence was ambiguous.

The notion of the “dictatorship of relativism” in modern society shaped the programme of Pope Benedict’s papacy of almost eight years. It required the Church to become defensive and more inward looking.

Pope Francis has taken a different course. He has thrown open the doors of the Church, and told its pastors to go out where they are needed, to “smell like the sheep”, and engage with modern society. The Holy Father places a special emphasis on social justice, and urges a priority to pastoral mercy.

Crucially, Pope Francis engages with and confronts the signs of the times by acknowledging the conditions in which these occur.

So when the retired pope speaks of “a time in which the Church stands in particularly pressing need of convincing shepherds who can resist the dictatorship of the spirit of the age”, he gives rise to an impression that he was rebuking the present pope’s approach.

We have no way of knowing whether Pope Benedict’s words were coldly calculated or poorly considered. There is a precedent of Benedict misjudging the impact of his words, as we witnessed when his 2006 lecture in Regensburg derailed Catholic-Muslim relations for a decade.

Reportedly he was puzzled by the reaction to his speech in Regensburg because he had not intended to cause offence or controversy. The same may well be true of his message at the funeral in Cologne.

But he said what he said, in terminology that defines the opposition to Pope Francis. In a climate of polarisation within the Church between those who stand with the Holy Father and those who do not — a polarisation which Benedict himself must be alarmed by — this is unhelpful.

When Pope Benedict abdicated the papacy in 2013, he created a new status: that of the emeritus pope. He doubtless was acutely aware of the hazards that might give rise to a virtual dual papacy, knowing that any statement he makes would be closely examined.

Had Benedict upon his renunciation of his papacy reverted to the rank of cardinal, he might have enjoyed greater latitude for speaking his mind freely. But he retained his title and papal name, and with that came an ethical obligation to prevent saying or doing anything that might give rise to perceptions of two men in white pulling in different directions.

Benedict has honoured his promise to exercise the necessary discretion to avoid any possibility of a dual papacy, and his fidelity to Pope Francis is evident — as is the Holy Father’s love for his predecessor.

Benedict’s comment at the Meisner funeral should, therefore, best be understood an inadvisable aberration.