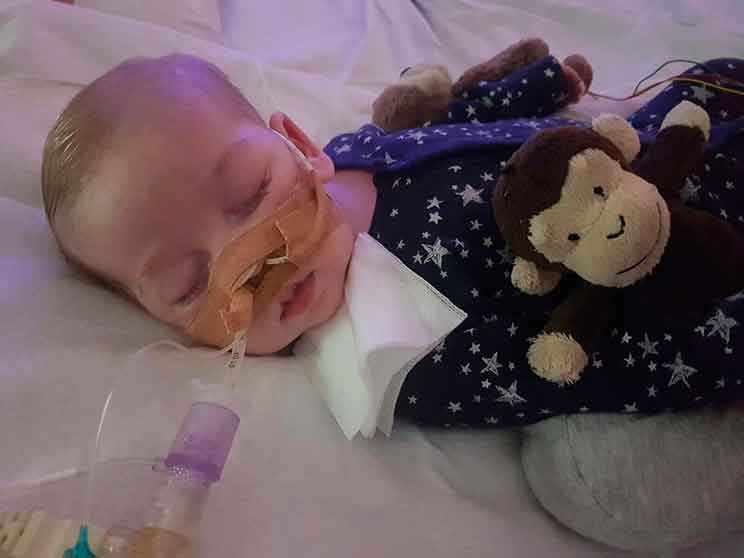 Charlie Gard, who was born in England with mitochondrial DNA depletion syndrome, is pictured in this undated family photo. The baby’s parents, Chris Gard and Connie Yates, have lost their legal battle to keep Charlie on life-support and seek treatment for his rare condition in the United States. (CNS photo/family handout, courtesy Featureworld)

Pope Francis called for respecting the wishes of a terminally ill child’s parents to accompany and care for their child “until the end.”

Expressing his closeness to the parents, Pope Francis said he was “praying for them, hoping that their desire to accompany and take care of their own baby until the end is not disregarded,” Burke’s written statement said in Italian July 2.

In London, Charlie’s parents, Chris Gard and Connie Yates, crowdfunded nearly $1.7 million in four months to finance having the baby treated in the United States. However, when hospital officials wanted to stop providing life support for the baby, the parents went to a London court with their case, but the court ruled the baby should be allowed to “die with dignity” and doctors could stop providing life support. Further court actions, including a decision by the European Court of Human Rights June 27, upheld the ruling.

The parents’ continued request to the hospital was to allow them to take Charlie home to die. That request has been denied, and the hospital had said it would be suspending life support June 30 — a date that has since been extended.

The official Twitter account of Pope Francis, @Pontifex, posted a tweet June 30, “To defend human life, above all when it is wounded by illness, is a duty of love that God entrusts to all.”

The Pontifical Academy for Life and the Bishops’ Conference of England and Wales extended prayers for Charlie, the medical staff caring for him and the parents.

Archbishop Vincenzo Paglia, president of the Pontifical Academy for Life, said the situation of Charlie and his parents “has meant both pain and hope for all of us,” and he assured them of his prayers.

“We feel close to him, to his mother, his father, and all those who have cared for him and struggled together with him until now,” he said in a written statement, dated June 28 and posted online by Vatican Radio June 29.

The important question to ask in this and other unfortunately similar cases, he said, is, “What are the best interests of the patient?”

“We must do what advances the health of the patient, but we must also accept the limits of medicine,” he said, and, according to Catholic teaching, “avoid aggressive medical procedures that are disproportionate to any expected results or excessively burdensome to the patient or the family.”

However, the wishes of the parents also must be heard and respected, he said, “but they, too, must be helped to understand the unique difficulty of their situation and not be left to face their painful decisions alone.”

If the relationship between patient, guardians and doctors is “interfered with, everything becomes more difficult, and legal action becomes a last resort,” the archbishop said.

There is also the “risk of ideological or political manipulation, which is always to be avoided, or of media sensationalism, which can be sadly superficial,” he added.

Reacting to the European court ruling, a spokesperson for the Catholic bishops’ conference said the definitive ruling that “baby Charlie Gard cannot undergo any further treatment is heartrending, most particularly for his parents and family.”

“In this difficult case, all sides have sought to act with integrity and for Charlie’s good as they see it. Understandably, Charlie’s parents wish to do everything to save and improve Charlie’s life. We hope and pray that in the wake of this decision, they are able as a family to find peace over the coming days and weeks. We also encourage the Catholic community to pray for Charlie, his parents and all those that have been caring for him.”

“Sadly, prolonged terminal illness is part of the human condition,” the written statement said. “We should never act with the deliberate intention to end a human life, including the removal of nutrition and hydration so that death might be achieved. We do, sometimes, however, have to recognise the limitations of what can be done, while always acting humanely in the service of the sick person until the time of natural death occurs.” By Carol Glatz Catholic News Service

Even at the Moment of Death: Faith! Hope!

Joy in Tribulation is Mark of a True Christian

My Search for Love at the Mall

There have been many songs written about love. Many musicians have tried to define it, many filmmakers have attempted to...