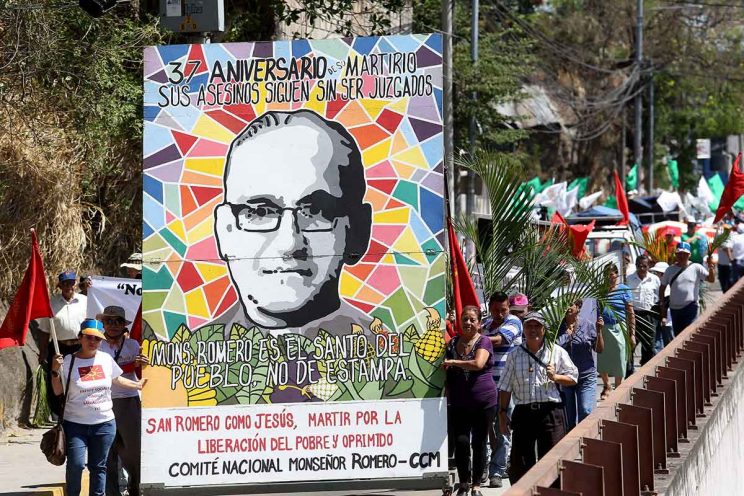 People participate in a late-March procession to commemorate the 37th anniversary of the killing of Blessed Oscar Romero in San Salvador, El Salvador. A pilgrimage to celebrate the slain archbishop’s 100th birthday will be held Aug. 11-13, with pilgrims walking from San Salvador to Ciudad Barrios, where he was born. (CNS photo/Rodigro Sura, EPA)

On August 15, many Catholics around the world will mark the centenary of the birth of one of the great saints still awaiting canonisation – Oscar Romero

On the feast of the Assumption in 1917 — while across the Atlantic Our Lady was making her series of appearances at Fatima — Óscar Arnulfo Romero y Galdámez was born in Ciudad Barrios, El Salvador.

After the Grain Comes the Harvest

The life of the man the world has come to know as Archbishop Óscar Romero was ended cruelly by the bullets of a government death squad on March 24, 1980 — while he was saying Mass. At the moment the bullet hit him, he was raising the chalice in the consecration of the Eucharist.

The hosts on the altar were reportedly soaked with the slain archbishop’s blood.

Archbishop Romero was a hero to many for his courage in speaking out plainly against the regime’s brutal violence and injustice.

His martyrdom brought Archbishop Romero to the world’s attention, more so than those of other Catholic priests who were murdered in those years, especially in Latin America, to silence their Christian witness.

Archbishop Romero’s ecclesiastical title contributed to his posthumous prominence, as well as the circumstances of his murder — killing a priest during the consecration of the Eucharist is not just personal, it’s a calculated assault on Christ himself. The hosts on the altar were reportedly soaked with the slain archbishop’s blood.

The day before his assassination, Archbishop Romero said in a homily: “Those who surrender to the service of the poor through love of Christ, will live like the grains of wheat that die. They only apparently die. If they were not to die, there would remain a solitary grain. The harvest comes because of the grain that dies.

“We know that every effort to improve society, above all when society is so full of injustice and sin, is an effort that God blesses; that God wants; that God demands of us.”

The Life of Oscar Romero

This served as the testament of a man who never sought to be a political activist, never mind a hero of a struggle that spans continents.

As a young priest, as a Catholic newspaper editor, as a seminary rector, as a young bishop, he was known to be overly scrupulous and firmly conservative.

He confounded these expectations. Three weeks after becoming archbishop, his friend Fr Rutilio Grande SJ, an activist working with the rural poor, was murdered by the regime.

Bl Óscar Romero teaches us that even for Christians who are not political and don’t want to be, there are times when our faith demands from us radical discipleship.

Archbishop Romero recalled: “When I looked at Rutilio lying there dead I thought, ‘If they have killed him for doing what he did, then I too have to walk the same path’.”

That path — the denunciation of social injustice, of economic oppression, of political violence, of US support for the junta, and so on — would lead to his death at the age of 62. But the voice of the voiceless did not fall silent. Even in Romero’s death, it spoke compellingly: truth to power, hope to the oppressed, encouragement to the faithful.

A Witness to Many

The example of Archbishop Romero inspired countless Catholics, laity and clergy alike, around the world to join or persist with the struggle against injustice.

Among those who took inspiration from Romero was an Argentinian Jesuit, Fr Jorge Bergoglio. As Pope Francis, the Jesuit beatified the martyr in 2015 — after the Vatican had, shamefully, stalled the saintly martyr’s cause for political reasons over many years.

In South Africa, too, Catholics in the anti-apartheid struggle were inspired by the example of Archbishop Romero. And that example retains currency even today as we are faced with social and economic injustice, the subversion of democracy by special interests and corrupt leadership, racial tension, human trafficking and so on.

Archbishop Romero’s life witnesses God’s call to us to always be open to personal conversion and transformation, to hear Jesus’ challenge to leave our comfort zones and follow the demands of the Gospel.

Bl Óscar Romero teaches us that even for Christians who are not political and don’t want to be, there are times when our faith demands from us radical discipleship.