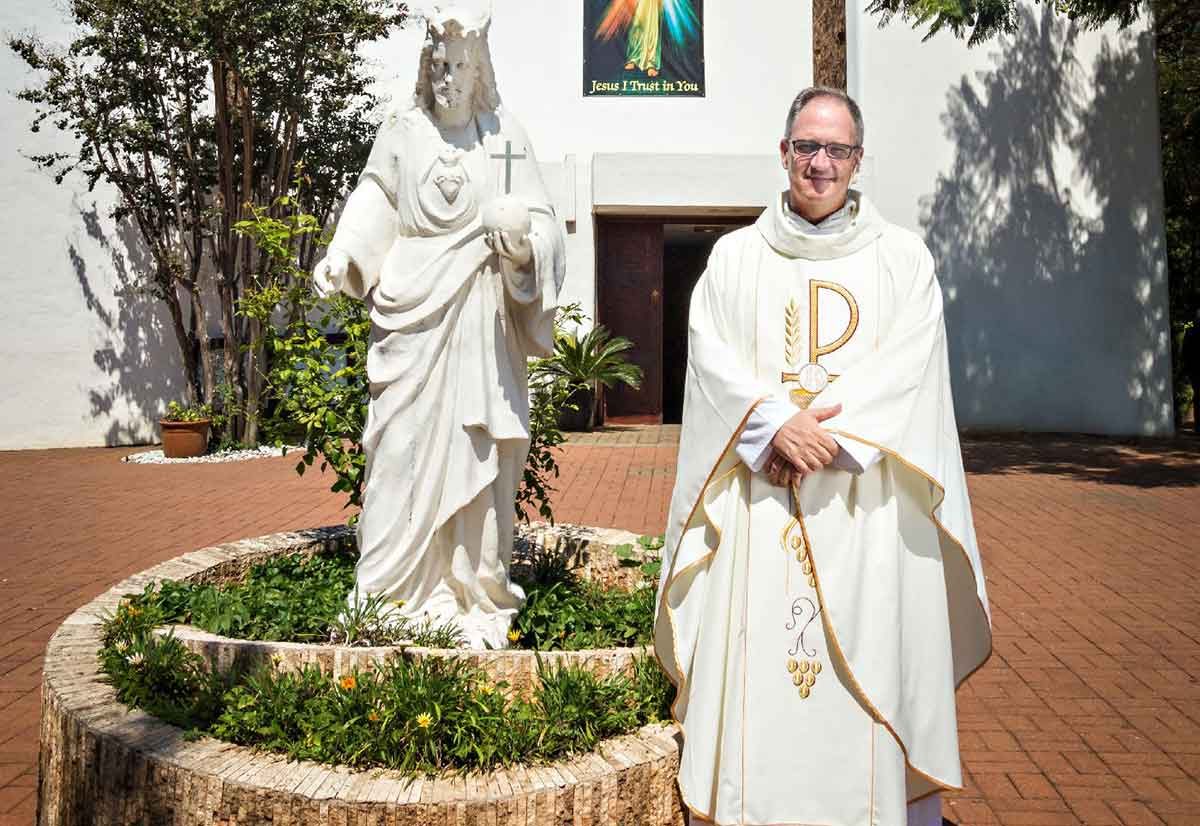 Father Chris Townsend outside the church of Christ the King in Queenswood, Pretoria

I’ve been thinking about how we in South Africa — like many other places —are struggling with what our churches mean and should look like. I’ve been thrown into this struggle in the last few years when I’ve become responsible for renovation and restoration projects that preserve and enhance our Catholic legacy.

Botox and Filler for Our Church

Our parish church has reached the age of 50. It’s the point some women — and some men — consider a little botox and filler to recapture a youth that isn’t so visible anymore.

In the same way, our church is having a bit of a botox treat — a lift and filler.

She’s also having a bit of bypass surgery to the sewerage, but that’s not the focus… At any rate, renovations are underway.

I’ve been thinking about how we in South Africa — like many other places —are struggling with what our churches mean and should look like.

As our hospitals are all gone and our schools are very seldom parochial anymore, we are left with a built legacy of churches.

One of the ideas that prompted me to think about this was art. I grew up in a parish church that had magnificent woodwork by the South African artist Cecil Skotnes. His woodcut Stations of the Cross in Our Lady of Lourdes church in Rivonia, Johannesburg, are sublime.

The church of St Theresa in Rosebank and the other churches designed by the architect AJC Voorvelt throughout South Africa are incredibly beautiful.

The seminary chapel of the Old St Peter’s in Hammanskraal was a master stroke of design, and there are hidden gems of architectural beauty all over South Africa, such as the amazing Christ the King cathedral in Queenstown or St Saviour’s in Oudtshoorn.

Even some modern churches, such as that of our parish of Christ the King in Queenswood, Pretoria, show a great concern for how aesthetics raises our hearts to harmony and beauty—and the Ultimate.

The Language of Buildings

Sadly, too, there are many churches in South Africa where no such care was taken, no thought given to the language of buildings and how these can change our minds and open our hearts.

St Anthony’s in Coronationville and other churches by the same group of architects in Johannesburg are a case in point — changed for utility that lost their language. Sometimes, the triumph of utility kills the residue of beauty and thought.

Yes, sometimes architects are too clever, but we need to be in dialogue with their thought embodied in a design.

In travelling around South Africa and recognising that we are still very much mission territory, I do wish we would take more concern for the art that so many of our parishes both have and need. We are too quick to settle for the mass-produced and, in a sense, the cheap and kitsch. I do understand, though, the financial constraints that dictate this.

Church of Leftovers – and Beautiful

Recently, I was in one of our newer churches and it’s a huge testament to the efforts of a small community for their Domus Ecclesiae — their home of the Church. Their sanctuary was made up of salvaged tiles and leftovers. It’s more beautiful than marble.

I wonder how we engage South African artists — the many who would love to work for the Church and whose work would happily represent the spiritual traditions and ideals we wish to represent. Yet, I don’t see much of this being done. No challenge and commissions for the betterment of Catholic art in Southern Africa.

There are so many incredible artists and artisans who could be called upon to represent our ideals in beauty. The Church has always been a patron of the arts.

Maybe it’s the cost that scares us. But true art can’t be bought over a counter. It requires a community in dialogue with itself and the artist. It requires investment, time and a vision.

Maybe this is our greatest issue as our vision becomes less about the ultimate ideal and the beauty we leave as legacy of pure utility — meeting halls that house the church but don’t really inspire the community or represent it.

Art for the Dead?

Much of the great art was designed as memorial for the dead. I wonder if we couldn’t move some of the unbelievable, almost extortionist amounts of money being spent on tombstones for graves into lasting legacies for communities.

But that’s an argument that would need a few committed laypersons to leave behind clear instructions not to build a city of the dead but a city for the beauty of the living.

I have also heard the complaint that there are no longer artisans such as marble masons, sculptors, founders and carpenters who can create works that inspire. I beg to differ.

They do exist in South Africa,  I have met them. They are just not receiving the commissions from churches that make the work worthwhile both from a creative and economic standpoint.

I finish with a thought for those who use the Africanist argument: that we’re a poor church, we don’t need European art, we just need buildings. Do yourselves the favour of visiting the beautiful church of St Martin de Porres in Orlando West in the archdiocese of Johannesburg.

Incredibly designed and executed originally by African artists, it was stripped and gutted by a missionary who claimed that black people don’t appreciate art! The Stations and other parts were sent off to the Old St Peter’s in Hammanskraal, whereby they were preserved, luckily.

By a long journey over many years, when the community of Orlando West rebuilt and expanded their church, the collection was returned home to its rightful and beautiful place.

Let’s not think small: our vision will guide our execution!

Why We Need A Synod on Priesthood

A Check-up for the Parish