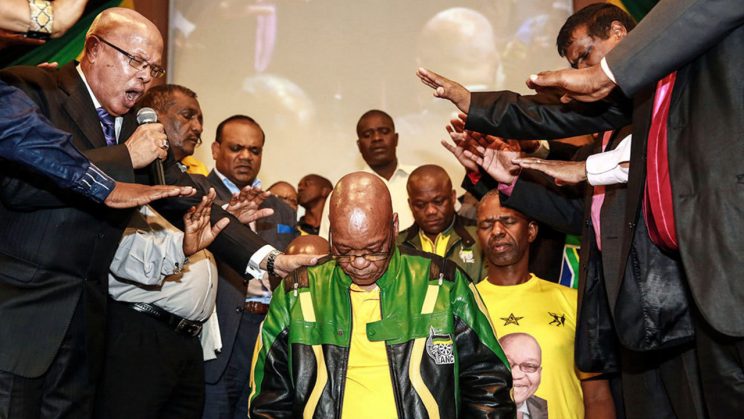 President Jacob Zuma, it seems, cannot stop himself from issuing his admonition that churches should keep out of his business — politics — and concentrate on theirs, which is to save souls.

We commend our column this week by Professor Emmanuel Ngara to President Zuma. As a pastor — Mr Zuma was ordained as such at a meeting of independent Charismatic churches in 2007 — the president should understand the Gospel command that compels the Church to speak out against social ills, including and especially those caused by corrupt and incompetent governments.

The president may also benefit from a gentle reminder that in his criticisms he should not expose himself to charges of hypocrisy. If his expectation is that politics and religion be kept apart, then he cannot use churches for his party political endeavours.

Yet, this is what he did when he used the setting of a Catholic church in Bulwer in the diocese of Mariannhill, KwaZulu-Natal, to officially launch the campaign for the presidency of the African National Congress of Dr Nkosazana Dlamini-Zuma.

From a Catholic point of view, this event was regrettable — and also instructive.

We, as the Church, must state our discontent with political mismanagement, corruption and immorality vigorously and explicitly, but in doing so we must not assault the human dignity of those we protest against. That is respect. This is compounded by the fact that as health minister in the Mandela government, Dr Dlamini-Zuma was the chief protagonist in the legalisation of abortion.

We can honour our politicians by welcoming them as congregants or guests into our churches, but we do not dishonour them when we assert our expectations as to their conduct when they visit us.

Mr Zuma and Dr Dlamini-Zuma should have been advised that it is not proper conduct to use a church as the venue for party political campaigning.

While it is good that Dr Dlamini-Zuma has maintained her Catholic faith and still regards Bulwer parish as her spiritual home, she dishonoured the Church by using it as an official launchpad for her presidential ambitions.

This is compounded by the fact that as health minister in the Mandela government, Dr Dlamini-Zuma was the chief protagonist in the legalisation of abortion.

There is justifiable confusion and anger when Catholic churches are abused for party political purposes. Some Catholics are now persuaded that the Catholic Church has endorsed Mr Zuma and Dr Dlamini-Zuma.

At least one bishop — one with struggle credentials — wrote on social media that he has difficulty participating in diocesan events in Mariannhill when there is a lack of clarity about its relationship with Mr Zuma and his faction of the ANC.

Some Catholics are now persuaded that the Catholic Church has endorsed Mr Zuma and Dr Dlamini-Zuma. Absurd as this notion may seem — the bishops’ conference has been highly critical of Mr Zuma’s presidency and endorses no particular party — such perceptions have traction.

At the same time, it should be understood that sometimes politicians will speak in a church, and when they do so, their words will be filtered through their political worldview. Short of banning politicians from going to churches and addressing congregations — a proposal that cannot be feasibly entertained — this is inevitable. At the same time, sometimes it is necessary to identify politicians or parties whose actions or policies violate the Gospel — for the Church to speak Truth to Power.

Nonetheless, when politicians — be it a ward counsellor or the nation’s president — are invited to speak in churches, due care must be taken that their appearance does not take the form of partisan politics, and that their presence cannot be seen as an endorsement by the parish or the Church in general.

And when it does, it may be essential for the local bishop, or even the bishops’ conference, to clarify the circumstances and, if necessary, to create a distance from it.

Priests have a responsibility to their parishioners and to the Church to be mindful that their own words and actions cannot be reasonably interpreted as party political partisanship.

At the same time, sometimes it is necessary to identify politicians or parties whose actions or policies violate the Gospel — for the Church to speak Truth to Power.

We cannot shy away from that, no matter how much politicians want us to.

Indeed, perhaps the visit to a church by a president is a very good time to do just that.

Rebellion in the Church