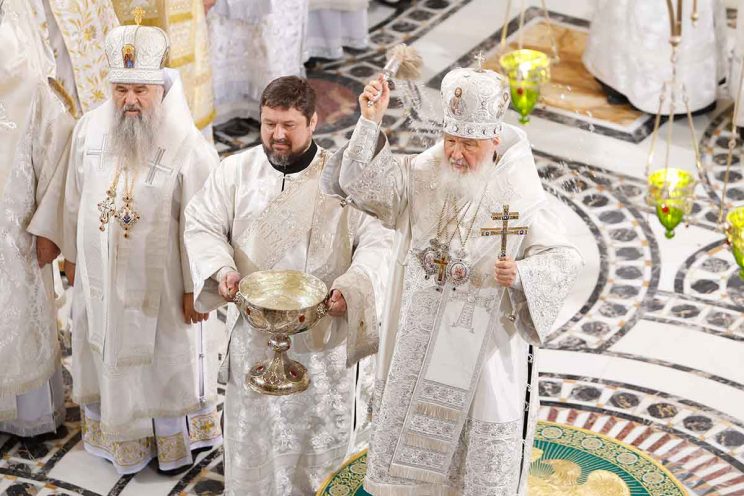 Russian Orthodox Patriarch Kirill of Moscow consecrated the Church of the New Martyrs and Confessors of the Russian Orthodox Church as a way of marking the centenary of the 1917 Bolshevik Revolution, which ushered in the communist era and led to the persecution of Christians. (CNS photo/Robert Duncan)

While some of his own citizens share such criticisms, others celebrate Putin as an Eastern Orthodox czar, warring with the forces of the Antichrist in an apocalyptic struggle for the soul of Christian civilisation.

“We consider Putin to be a modern form” of this kind of Christian leader, said Aleksandr Dugin, the controversial philosopher PBS recently described as a Russian “TV fixture and firebrand” who for years has “inspired the Kremlin’s ideology.”

Putin is “our ‘katechon,'” said Dugin, referring to “the figure mentioned by St. Paul in his writings concerning the end of time.” The word literally means “the ‘supporter’ who prevents the coming of the Antichrist,” a role that some Orthodox theologians attributed to the Byzantine emperors.

According to Dugin, the Antichrist is found today in the secularising forces at work in Western countries, particularly in the United States.

In contrast, Dugin highlights Putin’s efforts to discourage the practice of homosexuality, protect Christians in the Middle East and promote the Orthodox Church in Russian society as evidence of his Christian leadership.

“President Putin is certainly the figure that advances this Orthodox, Christian, Russian agenda, and he defends our identity,” Dugin told Catholic News Service.

Once a high-profile academic, Dugin was head of the Department of Sociology of International Relations at Moscow State University in 2014. At that time, he was accused of supporting violence in Ukraine.

Then, in 2015, Dugin was added to the U.S. Department of Treasury’s “Specifically Designated Nationals and Blocked Persons List” for his support of pro-Russian separatists in Ukraine.

“We are happy with your sanctions and happy with your attacks against us because we see in all that confirmation of our right faith,” Dugin told CNS. But he said he has never endorsed violence, only “legitimate defence.”

“We consider this a holy war,” Dugin said. “We defend the identity of Russian traditional society and that means we are defending Orthodox Christianity.”

While most Russians do not speak of politics in terms of holy war, a recent study from the U.S.-based Pew Research Center found that 85 percent of Russians believe that “a strong Russia is necessary to balance the influence of the West.”

Significantly, the report also said as many as 41 percent of Russians believe that, in some circumstances, nondemocratic forms of government are preferable to democracy.

But at the same time, many Russians are growing increasingly suspicious of Putin’s overtures toward the Orthodox Church.

“People think that our officials’ Christianity is nothing more than public relations,” said writer Maya Kucherskaya, pointing out that government officers are often seen on televised church services.

“They even have a name for such an official: ‘a candlestick,'” Kucherskaya said.

Kucherskaya’s 2011 book, “Faith and Humor,” detailed the rebirth of Russian Orthodoxy in the 1990s after the fall of communism. But as parish attendance plateaued and church officials began collaborating with the government, she said her optimism waned.

For public officials to be credible as Christian leaders, she said, they would have to be “more merciful, caring, attentive to people’s needs.”

Deacon Andrey Kuraev, a popular blogger and critic of church-state ties, said he was skeptical of some of the government’s measures to promote Orthodoxy in modern Russia.

For the government “to defend Christian values is good, but the question is what values,” Deacon Kuraev said. “Is the right to independent thinking and freedom of religion one of these values?”

He noted that that the Russian government under Putin has restricted religious freedom for some non-Orthodox groups, such as the Jehovah’s Witnesses.

“The Gospel says that he who digs a pit for others may fall into it himself,” Deacon Kuraev said. “I am afraid that the laws against cults developing today with the cooperation of the church could be turned against us in the future.”

For Maria Gnevsheva, 19, a student of Danish and Scandinavian literature at Moscow State University, politics should be kept out of religion altogether.

“It is true that our president supports Orthodoxy,” Gnevsheva said. “But I can’t call him an Orthodox leader. He is a secular person, a politician. He’s got his political program. In some cases I agree with him, but sometimes not. I prefer not to mix these things.”

For other Russians, however, the mixing of politics and religion belongs to the Orthodox tradition of “symphonia,” which holds that state and church have a duty to cooperate to realise Christian ideals in society.

Putin is the only Russian leader “in 100 years who understands this role of the state,” said Konstantin Malofeev, a financier and founder of Tsargrad TV, a Russian Orthodox television channel.

Putin has a religious understanding of his office, Malofeev told CNS, and is trying to make Russia a country where “Christians can live and Christians can save their souls for eternal life.”

Putin “could be the champion for all Christians in the world,” he said, adding that, “the Catholic Church is our natural ally.”