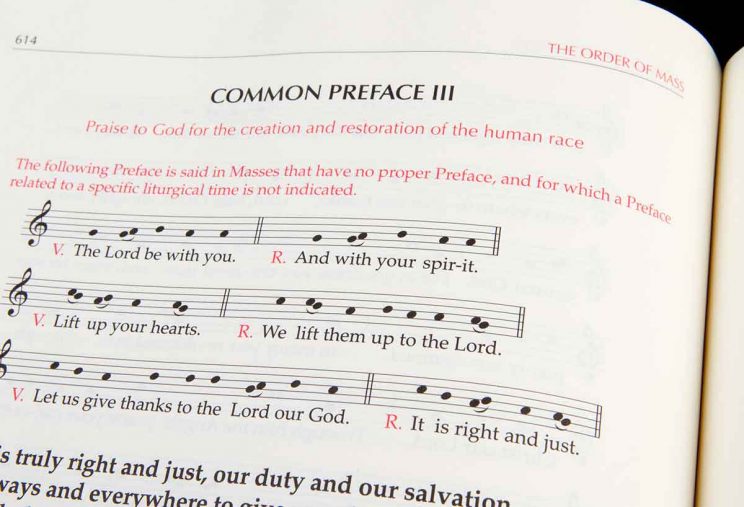 A page from the current English missal. Pope Francis’ decision to allow bishops’ conferences to approve liturgical texts will likely not lead to an immediate review of the English texts.

A  document released by Pope Francis that gives bishops’ conferences greater power in introducing liturgical texts will have no immediate impact on the current English missal but will facilitate the approval of translations into South Africa’s other languages, according to the bishop responsible for liturgy in Southern Africa.

In his motu proprio “Magnum principium” (“The Great Principle”) , Pope Francis made changes to the Code of Canon Law regarding translations of the Mass and other liturgical texts, and highlighted respect for the responsibility of bishops’ conferences.

Vatican Will No Longer Review Translations

“I don’t think the motu proprio is immediately applicable to the English [liturgical translations] but rather to our local vernacular languages,” said Bishop Edward Risi, chair of the Department for Christian Formation, Liturgy, and Culture at the Southern African Catholic Bishops’ Conference (SACBC).

“‘Magnum principium’ does not simplify the work of translating liturgical texts into local languages. Many hours are spent by dedicated people who debate, argue and struggle to find the correct way of transmitting the correct understanding of the liturgical texts,” Bishop Risi told The Southern Cross.

“The motu proprio simplifies the process of recognising these texts by giving much greater recognition to the role of bishops’ conferences in this particular stage of preparing translations into local vernacular languages.

Texts Prepared in Local Languages Can Now Be Approved by SACBC

“In the SACBC we have adopted the practice of approving the texts prepared in vernacular for a period of five years before applying to the Holy See for the necessary recognitio. But the motu proprio now gives us the right to approve these texts and ask for confirmation from the Holy See. In this sense the process of confirmation gives greater acknowledgement of the work of local conferences in terms of preparing translations,” he said.

Bishop Risi said that he believes English-speaking bishops’ conferences will retain the unified approach of the past.

“It is of interest to note that the late Archbishop Denis Hurley was one of those who insisted that there should be only one translation of the liturgy in English, and it is one of the founding principles of ICEL,” the International Commission on English in the Liturgy.

“I don’t foresee a change of policy regarding English translations,” the bishop said.

He noted that the English liturgical texts “are very important in the process of other translations because of the great dependence on the English text in the translations into vernacular”.

In “Magnum principium” Pope Francis did not overturn previous norms and documents on the principles that should inspire the various translations, but said they were “general guidelines” which should continue to be followed to ensure “integrity and accurate faithfulness, especially in translating some texts of major importance in each liturgical book”.

However, the pope seemed to indicate a willingness to allow some space for the translation principle known as “dynamic equivalence”, which focuses on faithfully rendering the sense of a phrase rather than translating each individual word and even maintaining the original language’s syntax.

The latter approach marked the most recent liturgical translations which has been met with significant opposition.

“While fidelity cannot always be judged by individual words but must be sought in the context of the whole communicative act and according to its literary genre,” the pope wrote, “nevertheless some particular terms must also be considered in the context of the entire Catholic faith, because each translation of texts must be congruent with sound doctrine.”

The pope said the changes would go into effect as of October 1, and he ordered the Congregation for Divine Worship and the Sacraments to “modify its own ‘Regulations’ on the basis of the new discipline and help the episcopal conferences to fulfil their task as well as working to promote ever more the liturgical life of the Latin Church.”

Unity of the Roman Rite to Be Preserved

The greater oversight provided earlier by the Vatican was understandable, Pope Francis said, given the supreme importance of the Mass and other liturgies in the life of the Church.

The main concerns, he said, were to preserve “the substantial unity of the Roman rite”, even without universal celebrations in Latin, but also to recognise that vernacular languages themselves could “become liturgical languages, standing out in a not-dissimilar way to liturgical Latin for their elegance of style and the profundity of their concepts with the aim of nourishing the faith”.

Another teaching of the Second Vatican Council that needed to be strengthened, he said, was a recognition of “the right and duty of episcopal conferences”, which are called to collaborate with the Vatican.

Bishop Risi said he doesn’t think “Magnum principium” could give rise to a new “liturgy war”.

“It is not necessary to have to go to war over things of faith and devotion,” he said.

Referring to the most recent, controversial translations, he said that he has discovered in its texts “a depth of proclamation and of faith which, with reference to the older texts, were not present”.

“I recall when in the process of the new translation of Eucharistic Prayer II, the reference to dewfall— ‘Sending down your Spirit upon them like the dewfall’—so many people said it is ‘meaningless’ and ‘it can’t be translated into our local languages’. Yet it is a deeply scriptural expression; the Spirit is being referred to in the symbol of the ‘dewfall’ countless times in the scriptures and at the same time, all vernacular bible texts have succeeded to translate it successfully.”