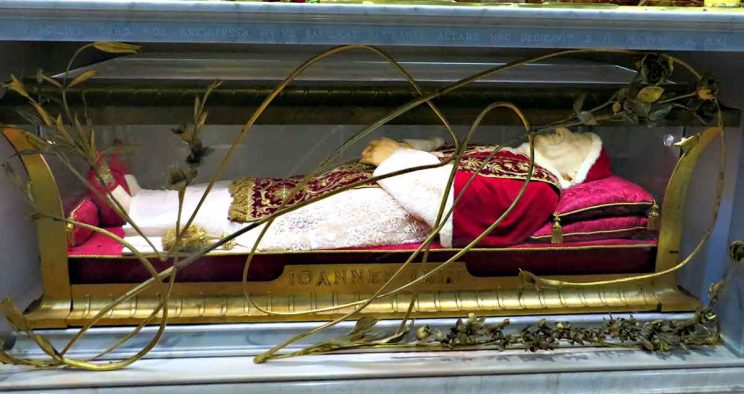 As you walk around the “Eternal City” — and I walked 50km in four days — you are conscious that you are treading on the bones of the past.

That is partly because around every corner there is some ruin or other of Ancient Rome, the city of emperors and gladiators, and partly because they are so many famous graveyards—the catacombs; and even one Franciscan community that has preserved, in artistic arrangements, the bones of centuries of friars in an ossuary.

But the real reason is that so many of Rome’s churches have been built to honour the remains of our Christian ancestors.

It starts with the most famous church, St Peter’s basilica. Directly below the high altar, it is believed with strong justification, lies the site of the tomb of St Peter himself. That is why the church was built there.

Indeed, the link between altars and bones is built into all our churches. The earliest Christians in Rome often celebrated Mass in the catacombs to hide from their persecutors and to feel close to those who had been martyred. So the tombs themselves served as the earliest altars.

That link continues today with the tradition that inside every altar there are relics of a saint, preferably a martyr, so that each one is, in a sense, a martyr’s tomb. That is one of the reasons why the priest kisses the altar when he approaches it.

So, as I walked across Rome I stumbled into churches containing the relics of many of those famous martyrs whose names we hear in the liturgy: Philip and James, Cecilia and Agnes, Cosmas and Damian.

But Rome’s bones are not just of early martyrs. Holy men and women who died in Rome have also had churches built to honour their remains. So the fabulously baroque Gesù, the mother church of the Jesuits, contains the tomb of St Ignatius Loyola. The more modest Church of St Augustine contains the tomb of his mother St Monica.

Religious Orders Bring Parts of their Founders to Rome

Moreover, just because you did not die in Rome does not mean you cannot be venerated there. Religious orders are especially keen to bring a part of the body of a founder to Rome so that they are more visibly included in the communion of saints.

Most of St Francis Xavier is preserved in the Bom Jesus church in Goa in India. But his right arm is displayed just opposite his old friend Ignatius in the Gesù in Rome.

I was saddened to hear that the relic of St Eugene de Mazenod, founder of the Oblates of Mary Immaculate, which had been brought from France to Rome to be kept in the altar of their mother house, had accidentally been reduced to dust by an overzealous priest—but the dust is still there.

Body Parts Represent the Reputation of the Saint

Often the most prized are body parts that represent something of the reputation of the saint. That is why it is Francis Xavier’s right arm which is there: it is the one he used for baptising so many thousands of converts.

In Padua, it is St Anthony’s tongue that is on display, recalling his reputation for oratory.

I should not, therefore, have been surprised when I walked into one church and found the foot of St Mary Magdalene — after all this was the first foot which stepped into Jesus’ empty tomb on Easter Sunday morning. But as I admired the precious reliquary that contained the bone, and the devotion of the people praying there, I could not help but feel a pang of scepticism.

Surely it was pretty unlikely that Mary Magdalene had her foot preserved and brought to Rome. This could really only be a “pious tradition”. And then I started worrying about all the other relics, how many were genuine and how many were not.

Relics Are Not Magic Amulets

Does it matter? I would like to suggest that it does not. We do not — or we should not — believe that relics are magic amulets that contain some sort of supernatural power. That would be paganism. Instead, they are important for what they represent and what they trigger in us.

When standing in front of something which may or may not be the foot of Mary Magdalene, I am better able to reflect on that Easter dawn and the experience of encountering the Risen Lord. That is what matters.

St Jerome put this most eloquently: “We do not worship, for fear that we should bow down to the creature rather than to the Creator. Instead, we venerate the relics of the martyrs in order the better to adore him whose martyrs they are.”

So seeing inscriptions marking the tombs of martyrs, I recall those who have suffered for the faith, and pray for those who continue to suffer for the faith. Visiting the tomb of St Monica, I recall how much she endured as she saw her son’s tortuous spiritual journey, and I pray for all long-suffering mothers (whose patron she is).

My highlight of Rome was kneeling in front of the glass coffin of St John XXIII, his infectious smile still evident on his embalmed body.

And there I prayed for the vision of the Church that he began to realise when he called the Second Vatican Council. I recalled bishops like Denis Hurley OMI who worked to bring that vision to reality.

So as I returned from Rome to Durban it was not Good St John’s bones but his spirit that propelled me back with renewed zeal for the Church.