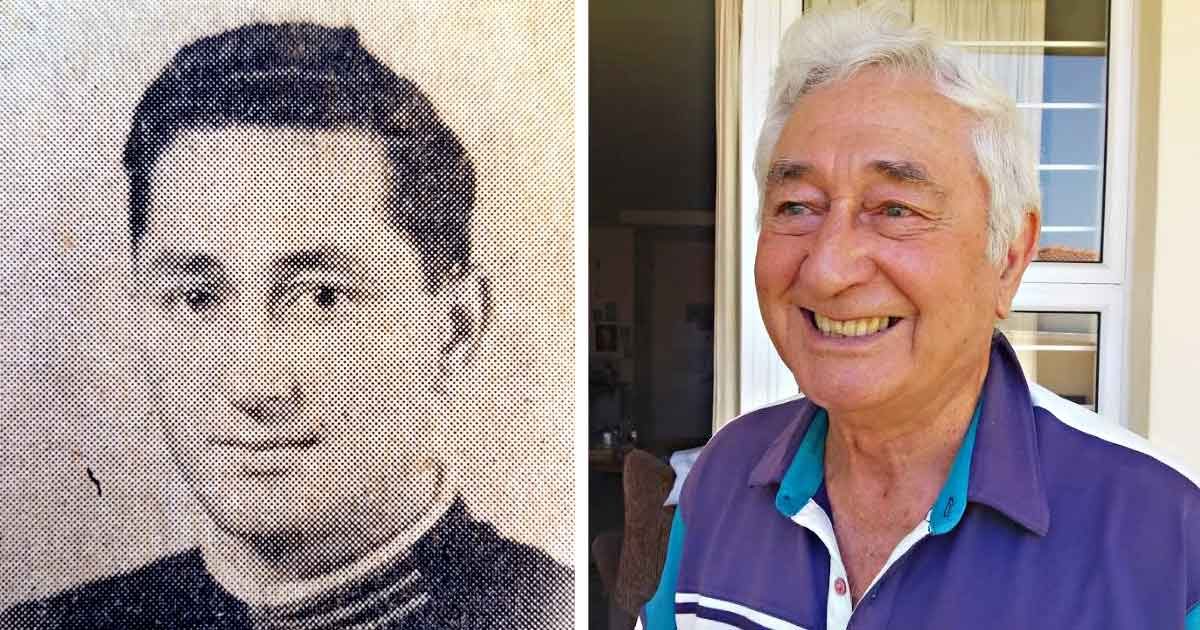 Left: Fr Ralph de Hahn as a seminarian before his ordination to the priesthood in Rome in December 1957. (Photo: Charmaine Little) Right: Fr De Hahn retired to Nazareth House in Vredehoek after 60 years of serving the Church. (Photo: Nereesha Patel)

A veteran media priest and a popular fixture in the Cape Town Church, Fr Ralph de Hahn is celebrating 60 years as a priest. NEREESHA PATEL spoke to him.

With a skip in his step that lets him bound up staircases with ease, a booming voice that could travel the world twice over, and an iron grip bordering on a bone-crushing squeeze, it is difficult to believe that the bright, blue-eyed priest is turning 90 in June.

And in February the archdiocese of Cape Town will officially celebrate Fr Ralph de Hahn’s 60th anniversary of his ordination.

For the past 60 years, since his ordination in Rome on December 21, 1957, Fr de Hahn has devoted his life to serving the archdiocese of Cape Town. Seemingly defying the turn of time, the retired priest said that he can only thank God for his longevity.

“It’s a miracle that a guy like me should ever get this far. I’m too wild,” Fr de Hahn joked. “What God has given to me by his extraordinary grace is amazing — it’s truly a miracle.”

The priest is still well-known for his tireless enthusiasm and fitness, in the Catholic Charismatic Movement he loves so much and in the parishes he readily supplies at.

Born in Cape Town in 1928, Fr de Hahn, the eldest son of a convert family, was a member of St Agnes’ parish in Woodstock, where he and his family were received into the Church.

He received his primary education from the Dominican Sisters at St Agnes’ Convent and the Irish Christian Brothers.

Then he attended Sea Point High School where he was involved in a wide range of sports, including athletics, cricket, badminton, football and ballroom-dancing.

But he wasn’t just a jock. Since he was 15, Fr de Hahn has been writing poems, stories and plays—for him, he says, to write is a gift from God. Southern Cross readers will know him well from his reflections and the nearly annual Christmas stories.

After matriculating, Fr de Hahn worked for seven years as a statistical clerk at a firm of indent agents. During this time, he also studied part-time for a secretarial degree.

By then he was a well-known youth leader in the diocese of Cape Town. This position not only allowed him to engage with other church youth groups, he said, but it also gave him the impetus to serve the Catholic Church in holy orders.

He went reluctantly, as he wanted to continue studying at St John Vianney, but his archbishop was insistent.

“The cardinal told me that he went to this college in Rome, so I must do the same. He gave me the cruise and train tickets, saying, ‘Off you go, and God go with you’ — just like that,” recalled Fr de Hahn, chuckling.

Despite his hesitation, Fr de Hahn came to enjoy his four-year stay in Rome.

“It was a thrill to be there,” he said. “Students who went to Propaganda Fide came from all over the world as missionaries. We had the privilege of meeting cardinals, archbishops and dignitaries. They would come to meet the pope [Pius XII], who would send them to Propaganda Fide to dine with us, because we were students of his college!” 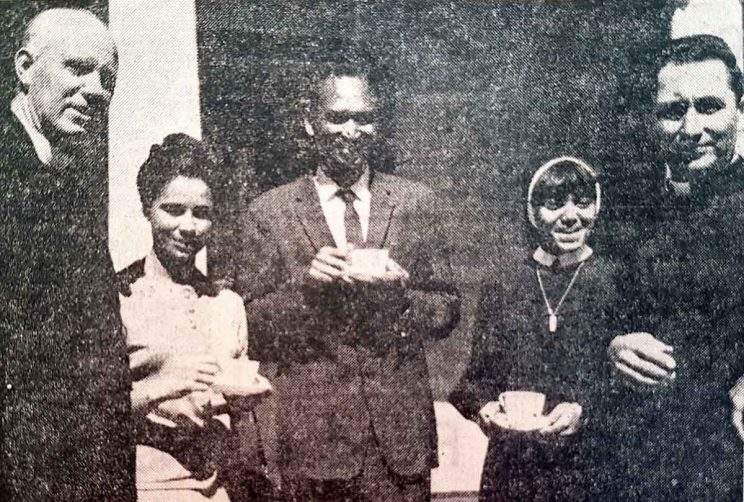 After his ordination by Archbishop Pietro Sigismondi, Secretary of the Congregation for Propagation of the Faith, in 1957 he returned to South Africa. Again following in Cardinal McCann’s footsteps, he was assigned to Holy Cross parish in District Six, where he remained until 1961.

He would take on as many as ten parish assignments around Cape Town, assuming these posts with the same level of dedication and passion that he possessed since his first assignment.

Alongside his parish duties, Fr de Hahn was a regular radio and television presenter on the SABC from 1968 to 1993. He used these media to proclaim the Gospel, to positive responses from listeners and viewers alike.

Additionally, Fr de Hahn wrote articles for a number of Catholic publications such as The Southern Cross, Diocesan News and Marianna, as well as for publications in Italy, India and Sri Lanka.

In 1966 he was appointed archdiocesan director of catechetics, a position he held for 20 years.

He made a point of visiting all the Catholic schools in the city in order to “bring the Church to them” and vice-versa. One of the highlights of his career was being able to create intimate relationships with the schools, teachers and pupils.

“Today, those teachers and children — now all grown up — tell me how they all remember me coming to their schools, teaching them and telling them stories,” he said.

Another career highlight was travelling to the United States on 20 occasions (lasting about six to eight months) as a chief missionary preacher. Over the years, Fr de Hahn brought back large amounts of money for the Cape Town archdiocese, courtesy of the countless American congregants who were touched by the visiting priest preaching for the poor.

For his involvement in the early stages of the Charismatic Catholic Renewal in the US, he was appointed the spiritual director of the movement in the Cape in 1967, retiring from that position in 2009.

Having a missionary view of his work, Fr de Hahn said that he lives by the spirit of poverty, giving away the money donated to him by generous people to the poor, who he feels need it more than him.

“From the money I collected from my preaching, I never used it for myself. It’s all been given to the poor and the archdiocese.” 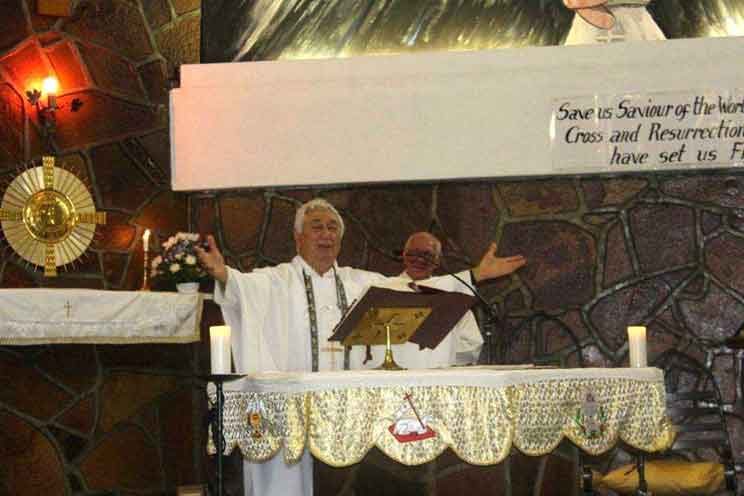 Fr De Hahn in typical pose as he greets the congregation at Mass at Holy Trinity church in Matroosfontein, Cape Town, this month.

In 1984, Fr de Hahn led the construction of Holy Trinity church in Matroosfontein, and in 2000, he was also able to purchase the Holy Spirit Centre in Maitland from the Holy Cross Sisters for the archdiocese.

When the call came from Archbishop Stephen Brislin to help build churches in three impoverished areas, Fr de Hahn utilised his writing talents to support the effort. He penned a collection of poetry, On Poetic Wings, which looks at the beauty of the Catholic faith; the anthology sold out in quick time, and all proceeds went towards the building fund.

For his work among disadvantaged communities, Fr de Hahn has been awarded a host of accolades, including the International Rotary Medal and the Don Bosco Silver Mission Medal. He was also honoured with a prestigious African poetry award.

Fr de Hahn’s last official post was as parish priest of Observatory before entering the retirement centre for priests at Nazareth House in Vredehoek. But even now in his retirement, he still remains active.

Among his recent writing endeavours was an inspirational book of short stories titled Let Me Tell You A Story.

With his diamond jubilee, the vast volume that is Fr de Hahn’s life-story still carries on growing. What is his secret?

“I’m always joyful. Happiness comes and goes, but joy of life is the virtue of the Holy Spirit; when you possess the Holy Spirit, joy is yours. Be content with what God made you,” Fr de Hahn said.