If the Shoe Fits…Get Funding and Donate It! 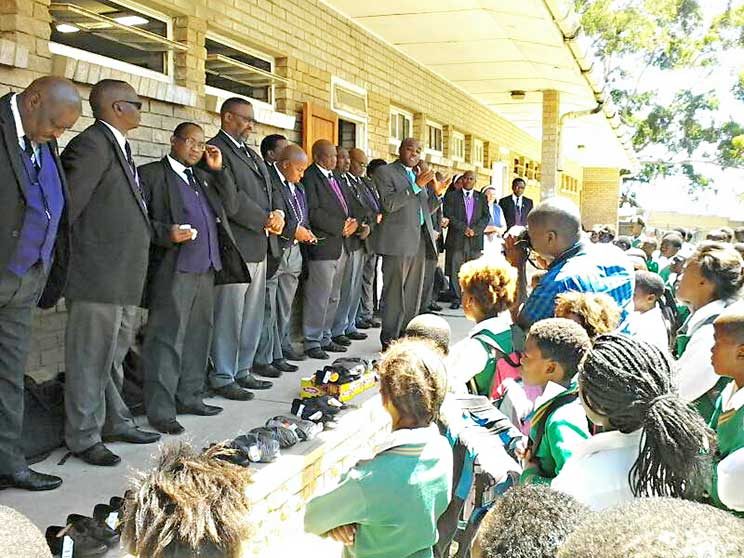 The Young Roman Catholic Men’s Union in Port Elizabeth started a project in 2015 to provide poor children with free school shoes. This year children at two schools and a youth centre in King William’s Town received 60 pairs of shoes.

When a group of young Catholics noticed that many children don’t have shoes to wear to school, they decided to act. This month, the Young Roman Catholic Men’s Union (CMU) of Port Elizabeth handed over 60 pairs of school shoes to two schools and a youth centre as part of their school shoe project.

Representatives from the schools and the youth centre accepted the shoes from diocesan chaplain Fr Tryos Munyaka.

“They were very happy,” said Br Thembinkosi Chithi, the diocesan secretary present at the event.

“These shoes are going to children who have either come from destitute families, been raised solely by their grandparents, or been victims of abuse,” he said.

“It was a touching moment for us to see how thankful the representatives were.”

The CMU comprises male Catholics who participate actively in local Church communities. They launched the school shoes project in 2015 with the goal of helping learners in need within the diocese.

They were able to raise funds and contributions for the project through the three deaneries in Port Elizabeth, East London and King William’s Town, where the CMU exists in various parishes.

Last year, with the help of the Missionary Sisters of the Assumption, the CMU identified the NV Cewu Public and Makana primary schools in Grahamstown as the schools to receive free shoes.

The CMU will continue this project in 2019, with children in the East London deanery as the next recipients of school shoes.

Vatican: Laity Have Role, But Most Parishes Must Be Led By Priests
Share