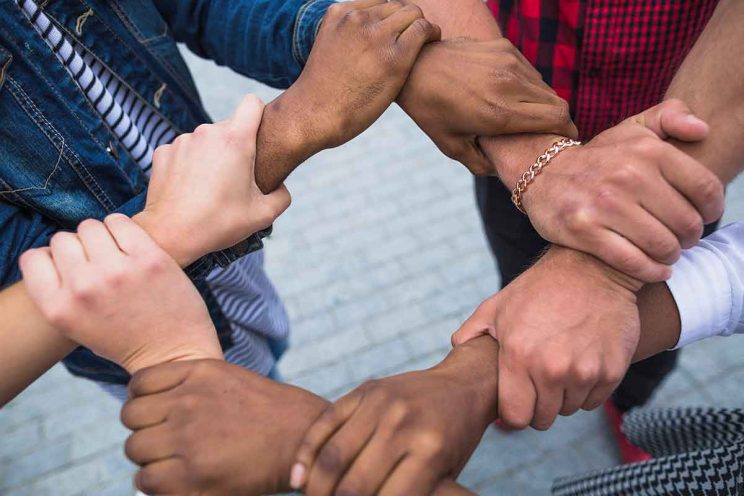 This Lent we have asked parishioners to put on name tags and to introduce themselves to each other at the beginning of the Mass. Generally, after an initial reluctance, most were happy to comply. Of course, there are always those whose vehemence in being anti-anything like this is really scary. But then, every family has those, don’t they?

The idea behind this little exercise is that so many of our parishes are made up of core members — those who are always there and with whom the clergy tend to spend time. And then there are lots of occasional members who come to church for Lent.

The building is a church, but Church is a Community

Our churches can be really intimidating. Artificial welcomes are never useful, but the more we practise an openness, the more chance we can make the little breakthroughs that make our buildings churches, and our churches communities.

Pope Francis is uniquely able to conscientise us about our interactions. And we know that he is living his ideas by his simplicity and openness, from the sips of the Argentinian drink Mate in general audiences to his focus on refugees.

It is this constant focus on the importance of a relational Christianity that is so crucial.

Working in big parishes with multiple Masses over a weekend, one quickly realises how difficult it is to build this relationship. In old-fashioned territorial parishes (less prevalent in urban areas now), we are increasingly finding a number of parishes sharing the same building and clergy. Cross-relationship is rare, especially if there is limited interaction space outside Mass.

One of our other initiatives is to encourage Lenten prayer partners. It’s an idea that encourages a deeper Lent. Prayer/charity/fasting takes on a new element if we add another person to the mix.

Our programme is a prayer lottery:  you put your name in a basket and draw someone else’s out. You can either be contacted by your partner or opt just to pray.

READ  St Vincent de Paul, Pinetown: Thank You to our Parish for your Support!

Spiritually, this is a very important as it offers to a community a new way of interacting. Being in a spiritual relationship with someone makes interaction easier (in most cases).

One of the great sadnesses of our communities is that the larger they are, the less the real interaction. This stifles our communities as it is so much easier to disappear — either into the always active group or into total anonymity.

Anonymous communities are easy communities. They don’t demand anything other than our presence at liturgy and the onerous donations to the parish, the Lenten Appeal and possibly the building fund. But aside from that (and bringing your child to the first three catechism lessons a year), there is no real need.

In the early Church and in smaller communities, this interaction made and makes a community. It is this space that builds us into a community of support.

Psychology tells us that most humans cannot function with more than 100 relationships at the most — most work best with fewer than that. Except for the clergy… we have to hold so many more relationships. That is, I suppose, the gift and burden of ordination.

Our communities need to be aware of this; we cannot all be on the same level of relationship with everyone. But we must be able to reach out to grow supportive communities that enable us to model a resurrection relationship rather than one of crucifixion.