Is Your T-Shirt Worth a Human Life? 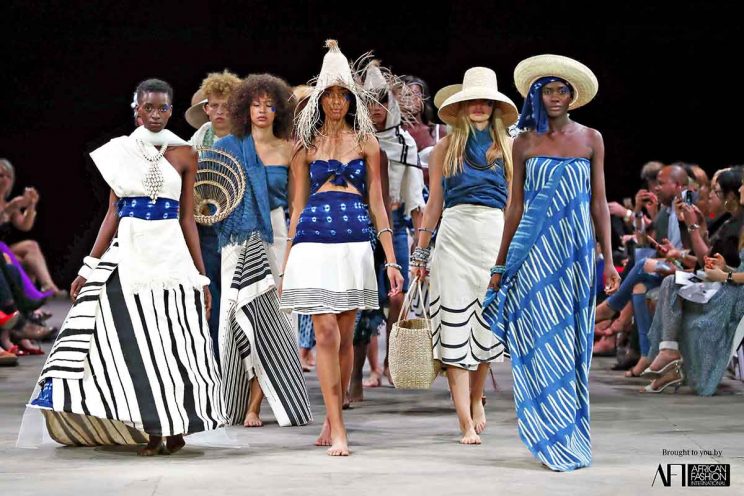 Models on the runway at Fashion Revolution during AFI Cape Town Fashion Week 2018. Fashion movements in South Africa can give guidance on whether the clothes we buy were made ethically or in rights-abusing sweatshops. (Photo: Reze Bonne/AFI)

A disaster in a building of clothing factories in Bangladesh five years ago changed fashion forever, with many now insisting on ethical production and consumption, as South African fashion writer CLOUDS DRUMMOND explains.

The place was Rana Plaza, an eight-storey building in the Savar Upazila district of Dhaka in Bangladesh which housed three factories, flats and shops. It was 20:30 on April 23,  2013.

“It was unbearably humid. Hot sticky air hung heavy over hundreds of workers who lined the factory floor, bent over sewing machines, some with permanently hunched shoulders from spending hours in that one position. Others were asleep on the cement floor, snatching a few precious minutes of rest during a 24-hour shift.

“Men were stationed in another department, yoked by the wet, messy task of dip-dyeing tons of fabric. Young children played innocently among them, unsupervised and oblivious to the safety hazard caused by exposed plug points and naked lightbulbs suspended from a myriad of exposed wiring poking out of cracked walls and ceilings. Food or drinks wasn’t allowed on the factory floors. I wondered when they ate; if at all.

“The noise was the worst; a monotonous drone of sewing machines churning out one seam after another. There was fabric everywhere; thousands of metres piled on every surface as far as the eye could see. A thick fog of fabric dust clogged my nose and burned my throat.

“Fourteen hours later I sat in the plush conference room of a business park situated a 20 minute helicopter ride away. As we thrashed out a multi-million dollar clothing deal contract, a secretary burst in, her eyes wide with shock. The factory I had visited had just been reduced to a mangled pile of rubble, casualties yet unknown.”

This account was relayed to me by my good friend John (not his real name, to protect him) who was on business in Bangladesh at the time. He’d been living in the Middle East and was employed by an influential institution to secure a contract for the production of a new clothing line due for launch in June that year.

His factory visit host was a major shareholder in the world’s largest garment brokerage company — a man who appeared indifferent to  the morbid and dangerous working environment.

“He didn’t seem to notice how affected I was by the factory conditions. His sales pitch was focused solely on name-dropping global brands to impress me. I couldn’t tell you whether this was true or not as I didn’t see any labels lying around but he seemed confident in telling me who his clients were and how much they produced,” John recalled.

Forget China. Bangladesh is home to 80% of the world’s clothing manufacture. Some 40 million people across the globe work to make clothing and 4 million of them live in Bangladesh where wages are especially low.

In a consumer market dominated by the need to impress, owning the latest trend has become a way of life. This demand has created a supply chain where “first out” yields the highest profit. And because time is money, any production line capable of churning out goods cheaply and quickly will be awarded a tender.

Rana Plaza, like so many others in the region, was one such environment. 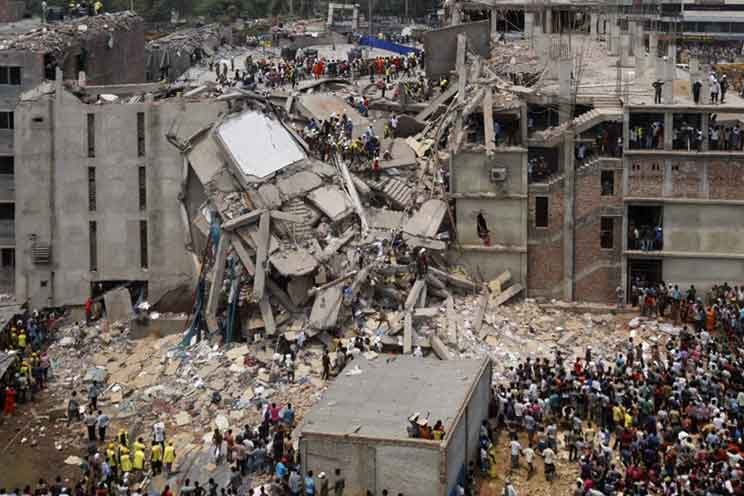 So what actually happened on April 23, 2013? The day was like any other, with hundreds of workers toiling away in three factories.

Serious cracks in the structure had previously been reported yet fell on deaf ears. This proved disastrous when on that fateful day the Rana Plaza crumbled, with all its factories’ employees still inside. There were 1,134 fatalities and about 2,500 injured.

The disaster touched Pope Francis. A week after it happened, and while bodies were still being retrieved from the rubble, he noted: “Living on $50 a month — that was the pay of these people who died. That is called slave labour.”

Later he connected that dot to us. In his apostolic letter Evangelii Gaudium he contrasted that “slave labour” with a prosperous lifestyle made partly possible because we can buy cheap clothing.

“Almost without being aware of it, we end up being incapable of feeling compassion at the outcry of the poor, weeping for other people’s pain, and feeling a need to help them, as though all this were someone else’s responsibility and not our own. The culture of prosperity deadens us; we are thrilled if the market offers us something new to purchase. In the meantime all those lives stunted for lack of opportunity seem a mere spectacle; they fail to move us,” Pope Francis wrote.

This horror of Rana Plaza  altered the face of fashion forever.

It inspired film maker Andrew Morton to find answers. His documentary The True Cost takes the viewer on a global fashion journey to meet world influencers who shine under the bright lights of international runway shows. On the flip side, it portrays a sad tale of how the demand for low-cost fashion supports the emergence of sweatshops, and its adverse effects on the environment and society.

In cities like Kanpur on the River Ganges in India, Chromium 6 is used to tan hide, a chemical directly related to skin cancer.

The True Cost also reports a figure of 250,000 Indian cotton farmers who committed suicide after being forced off their land when they failed to repay loans made to purchase genetically modified seeds.

In that light, fashion is looking less glamorous, isn’t it?

Fortunately, more good has emerged. Not only has the tragedy of so many deaths catapulted the plight of cheap labour onto every digital screen across the world, it also gave birth to the Fashion Revolution.

It was started in 2013 by Carey Somers and Orsolo de Castro, two UK-based fashion designers who saw the factory collapse as an opportunity to champion reform in fashion by creating transparency in the industry’s supply chain.

The organisation initially dedicated the anniversary of the Rana Plaza disaster to Fashion Revolution Day where millions around the world were called on to ask global brands, Who Made My Clothes?

By 2016, global activities spanned a week from April 18-24, and saw the launch of the Fashion Transparency Index. This white paper ranked 40 global fashion brands based on how much information they disclose to shareholders about their supply chain’s social and environmental practices.

How to shop responsibly

Transparency matters. It provides insight into the rights of workers in the garment industry; employee working hours, operational conditions, health and safety.

Do mothers get maternity leave, are there pension plans, medical aid or disability cover available? Are workers given access to sanitation and clean water? Are they protected from sexual abuse and paid enough to support themselves and their families? Transparency ensures that the clothes we wear will never be stained with the blood of 1,134 human lives.

So what does this have to do with consumers in South Africa?

Our country is a soft target because we’re the new kids on the shopping block. Globalisation in the form of travel, online retail and a plethora of international labels flooding our shores have seen a steady rise in exposure to clothing we haven’t had before.

Insecurity, peer pressure, that need to be accepted, have created a craving for celebrity status symbols which appear to prove our worth.

Sadly, our current poor socio-economic climate sees one hand grabbing cheap mass-produced clothing as the other hand inadvertently feeds the beasts which keep sweatshops like Rana Plaza in operation.

The solution to fighting the scourge of fast fashion is becoming so much easier that a lifestyle change may not be as painful as one would imagine.

Firstly, South Africa proudly sports a division of Fashion Revolution with a Cape Town office headed up by Cyril Naicker. As CEO of the publicity and media company Afrikan Soul Headquarters, his job entails working closely with his client Wear SA, a movement which strives to grow and sustain local clothing manufacture. Shop the brands they promote and you’re guaranteed a quality, homegrown product.

“Buy as much SA-made clothing as you can,” Mr Naicker exhorted in an article he wrote for the April 2018 issue of Glamour SA magazine.

“Research has shown that when we support independent local enterprises, we strengthen our own communities. Plus, buying local is good for jobs, creativity and the environment,” he added.

Economic growth and business development in the rag trade is also at the fore of Simon Deiner’s operation.

A passionate and proudly SA fashion and commercial lifestyle photographer, he co-founded South Africa Menswear Week, the only menswear fashion platform on the African continent. Since its inception in February 2015, this bi-annual show serves as a powerful portal into the world of apparel and associated accessories created by emerging and established African designers.

However, behind its aesthetic appeal sits an astute business mind dedicated towards bringing quality and design back home.

“The first criteria for showing at South Africa Menswear Week is that the manufacturing process is conducted on African soil. My team and I then follow up with a strong curation process to ensure quality in design and execution,” said Mr Deiner in an interview.

Furthermore, and possibly more importantly, he emphasised his commitment to the business of fashion and the promotion of these designers to build and create sustainable, profitable brands.

“I encourage local designers to share their challenges and successes with me. Having access to key international players in the industry has equipped me to help them grow their businesses in any and every way I can.”

Much like Cyril Naicker, Mr Deiner and the designers they represent, my friend John has become equally passionate about our garment industry. He left Bangladesh the day Rana Plaza collapsed, quit his job in the Middle East and returned home to start his own fashion label.

With the rise of such passionate South Africans investing in our industry, our only responsibility is to buy consciously. Being “sartorially vegan” may not be possible yet but the next time you’re out shopping, ask yourself whether the cost of a fast-fashion T-shirt is worth 1,134 lives.