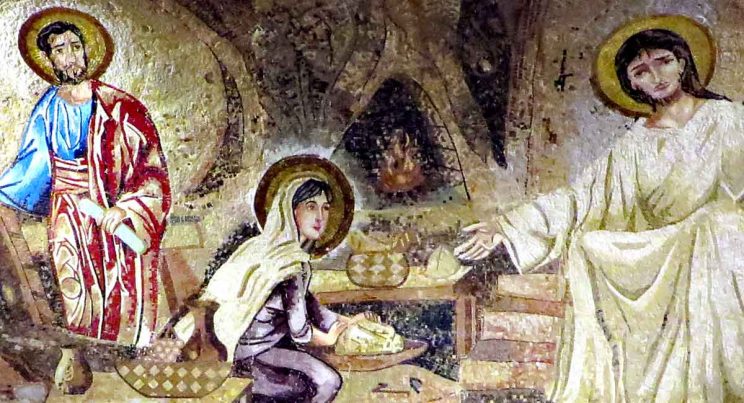 The Holy Family depicted in the church of St Joseph in Nazareth. (All photos by Günther Simmermacher)

The Blessed Virgin Mary was a real person of flesh and blood, and the recorded stations of her life are marked by shrines and churches throughout the Holy Land. Over three articles GÜNTHER SIMMERMACHER guides us on a pilgrimage to Mary.

Many Catholics revere the Blessed Virgin in the form of her many apparitions in places such as Lourdes, Fatima, Guadalupe, Knock and so on. This is indeed salutary, but in venerating Our Lady of various apparitions, there is a chance that we might lose sight of Mary the human being.

More than any apparition, Mary was a real person, living in a real place, giving real birth to a real baby. She loved and cried, ate and slept. And the theatre of that extraordinary life was the Holy Land.

Scripture gives us little information about Mary’s heritage. What we know or can deduce from the gospels is that Mary likely belonged to the tribe of Levi. Her lineage is from the house of David (as is, of course, Joseph’s), and her family very possibly belonged to the priestly class.

But Scripture is silent about when or where she was born, or to whom. For that we must turn to the Protoevangelium of James, written in 145 AD. James is not uncontroversial; the Church Father Origen dismissed him as unreliable, as did Pope Innocent I in 405.

And yet some of our Marian doctrines follow from James, including the Immaculate Conception. This suggests that the tradition of Mary’s nativity were already accepted beyond James’ apocryphal writings. 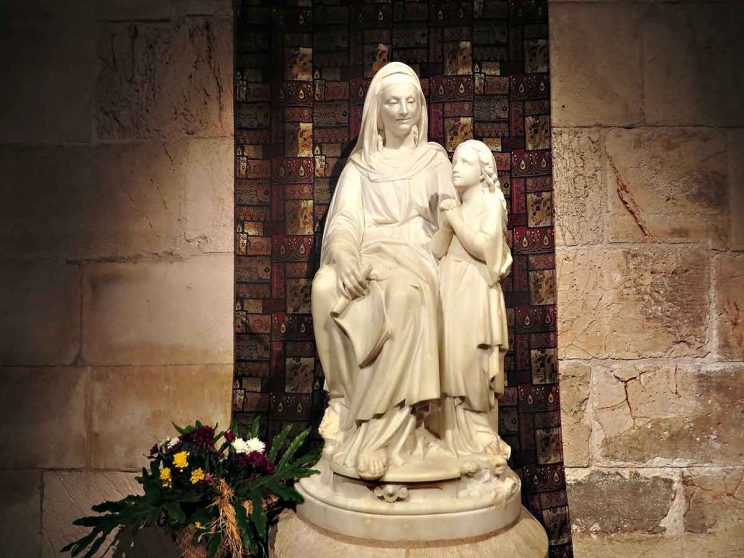 According to tradition, Mary’s parents were the elderly Anne and Joachim, and the birthplace was Jerusalem, near the Pools of Bethesda and the northern wall of the temple. That traditional birthplace is marked in the crypt of the Crusader church of St Anne’s.

The church was built in the 1130s to replace an older basilica dedicated to St Anne (or Hannah). The fact that the previous church was a basilica testifies to the potency of the tradition that this was indeed Mary’s birthplace.

Cared for by the Missionaries for Africa, the church is very well preserved. Its interior is plain, other than a beautiful sculpture of St Anne with her young daughter (and how often do we see Mary represented as a child?).

St Anne’s church is very popular for its astonishing acoustics. Many pilgrim groups will sing an impromptu hymn or two during their visit, and the church is often used for choral concerts.

If Mary was born in Jerusalem to a family of the priestly class, then she wasn’t the peasant girl of popular imagination. Indeed, her recitation of the Magnificat suggests that she had a sophisticated understanding of theology.

Her response to the invitation by the archangel to bear the Messiah also suggests that she was no simple-minded yokel.

By some twist of circumstance, the teenage Mary was by now living in Nazareth, a small village which was a little off the beaten track. Scripture places her encounter with the archangel in that village, today a busy Palestinian town of 75,000 inhabitants.

The Orthodox Church locates the Annunciation at the village’s only well. An 18th-century Greek Orthodox church, dedicated to St Gabriel, just metres from the well, marks that spot. Inside, pilgrims can draw water from the well.

Catholics don’t believe the Annunciation took place at so public a place. Nonetheless, the well is one of the few places where we can locate, with absolute certainty, the historical Mary. She would have been there every day. Of course, we can also locate Jesus there.

The Catholic Church holds that the archangel appeared to Mary at her home, and today a magnificent two-level church covers that spot. The upper level is the Catholic parish church for Nazareth’s Catholic community; the lower level incorporates the grotto of the Annunciation. 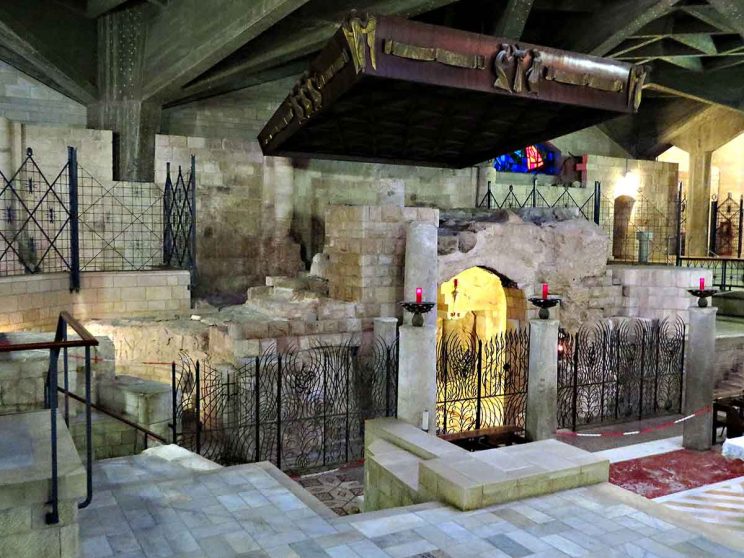 Not far from there is St Joseph’s church, which is said to have been the Holy Family’s home. There likely was such a tradition in the early days of the Church: a basin cut into the rock and decorated with black and white mosaics is believed to be a baptismal pool dating from before 313 AD (the year Christianity was “legalised” in the Roman Empire).

A more recent find rivals St Joseph’s church for the Holy Family’s domicile. Across the road from the church of the Annunciation, a well-preserved 1st-century home was unearthed in the Sisters of Nazareth Convent. It is speculated that the home’s preservation was due to its illustrious inhabitants.

We can’t really know whether this place or St Joseph’s church or the remains of a home uncovered next to the basilica was the home of the Holy Family. But we can be pretty sure that Mary knew the people who lived there.

Attached to the remains of the house at the basilica is the small Archaeology Museum of Nazareth which has on display various items from the older churches of the Annunciation and ancient pottery going back to the Bronze Age.

Among the outstanding treasures is a pre-Byzantine Christian inscription, incomplete in Greek, which states: “…under the holy place of M… I wrote there the… the image I adorned of her…”  Another Greek graffito exclaims, “XeMapya” (Hail Mary). It is the oldest existing Marian invocation, found at the place where Catholics believe the archangel greeted Mary with those words.

These inscriptions are proof that Nazareth was a place of veneration and likely of pilgrimage even before the toleration of Christianity in 313.

After the Annunciation, Mary made her way from the Galilee to the Judean hill country to share the news of her peculiar pregnancy with her older cousin Elizabeth, who (as the angel had revealed) was also pregnant, with the child whom the world would come to know as John the Baptist.

Tradition places that encounter in the village of Ein Kerem, today a Jewish suburb of Jerusalem but before 1948 an Arab village. 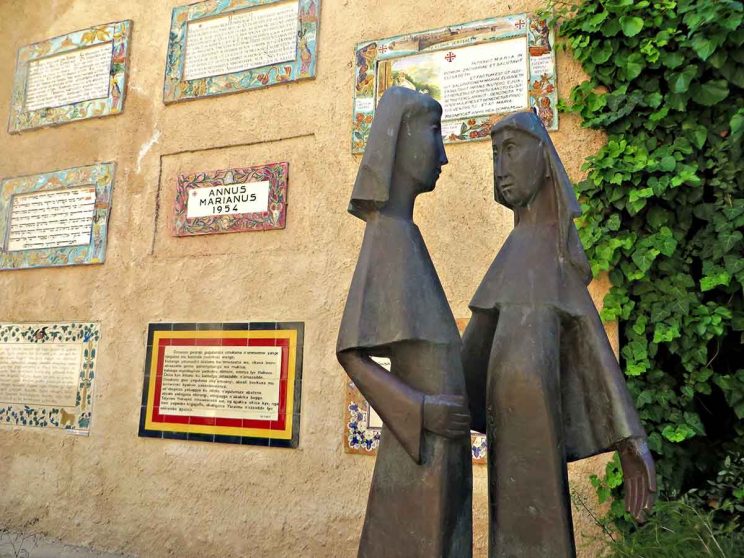 Mary visits St Elizabeth, with the Magnificat in different languages, in the courtyard of the church of the Visitation at Ein Kerem

The oldest extant reference that links John the Baptist to Ein Kerem dates from the late 4th century. The pilgrim Theodosius in 530 mentioned a place that fits the description of Ein Kerem as being the site of veneration of St Elizabeth. But if it wasn’t here where Jesus and John had their pre-natal encounter, then it was a place much like it.

Mary’s visit is marked by the two-level church of the Visitation, on top of a hill which can be reached only on foot.

The courtyard of the church features numerous plaques of the Magnificat, Mary’s canticle of praise in Luke 1:46-55, in various languages.

Academics can debate to the point of exhaustion whether Bethlehem was the actual birthplace of Jesus.

The most compelling argument for Bethlehem being the authentic place is that none of our early ancestors in faith claimed otherwise. Surely if the Messiah had been born elsewhere, there’d have been a tradition of veneration to that effect.

In the crypt of the church of the Nativity, first built by St Helena in the 4th century, a silver star marks the spot where the Saviour was born, and the place where his crib stood. Was that place randomly appointed? Common sense (and ancient tradition) suggests it wasn’t. 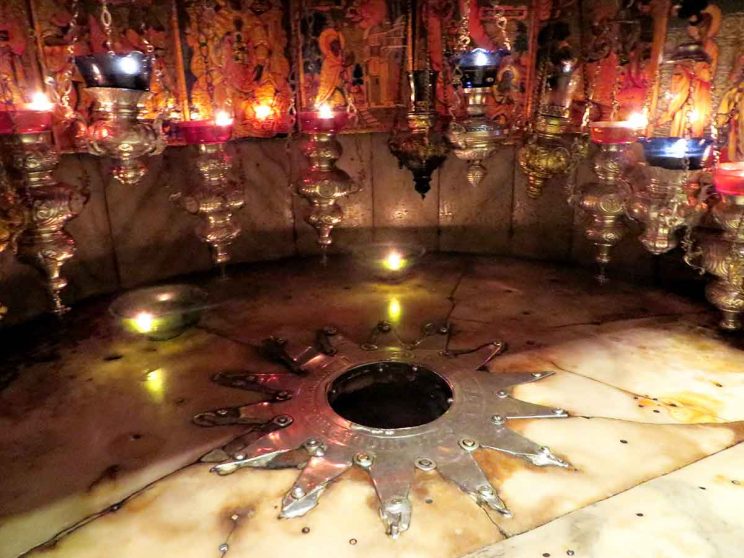 The star that indicates the spot of Jesus’ birth in Bethlehem’s church of the Nativity.

The narrative we recreate every Christmas of the Nativity of the Lord is misleading. Mary gave birth to Jesus not in the wooden stable in the middle of nowhere, but most likely in a cave at the back of a house. That was where families would keep their animals, which explains the tradition of the stable, the presence of animals, and the feeding trough (or manger) for a crib.

If this place was indeed a residence, then it is plausible that the locals would have remembered the time Mary from Nazareth gave birth there—certainly once Jesus had become famous, 30-something years later. Consider this: most of us will be able to recall with clarity for detail events that happened 35 years ago (in 1983, by our measure).

First-century people, with no access to reference books, had much better memories than we have now. Of course they would have remembered where the Saviour was born!

So when pilgrims touch the centre of the silver star in the crypt of the church of the Nativity, chances are very good that this is the actual place where the Blessed Virgin gave birth to the Redeemer of the world. 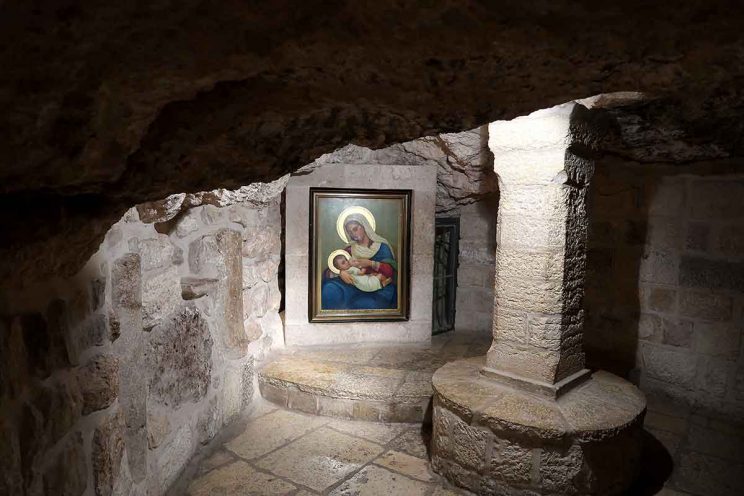 Mary breastfeeds her infant Son in a depiction in the Milk Grotto church in Bethlehem, where tradition says the Holy Family hid before their flight into Egypt.

Another church in Bethlehem entertains a rather more tenuous relationship to the historical Mary. The Magharet Sitti Mariam (Grotto of the Lady Mary), which is better known as the Milk Grotto, is the place where tradition says the Holy Family took refuge in a cave during the slaughter of the Innocents before fleeing to Egypt.

While Mary was nursing the infant Jesus, the story goes, a drop of milk fell to the ground, turning the grotto white. It probably was white before that: the type of chalk stone here tends to be naturally white. Still, powder made from the grotto’s rock is supposed to boost fertility.

Rather than for geological pieties or historical accuracy, the Milk Grotto is remarkable for something else: the motherhood of the Blessed Virgin finds expression in several artworks that show her breastfeeding the infant Christ. And that is showing Mary at her most human: nourishing the baby who will become the Saviour of the world.

Next week: Where we find Mary at the Temple in Jerusalem, in Cana at Jesus’ first miracle, and during the Passion of her Son.

Why Defending Pell is a Problem