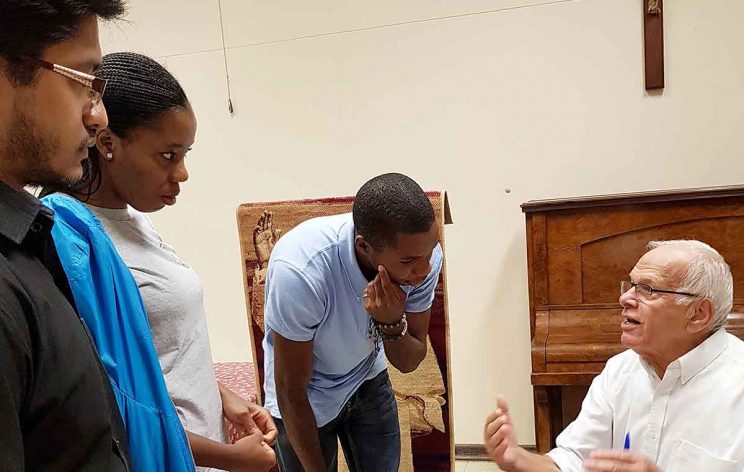 A veteran priest shared from his wisdom in a Q&A session with youths.

Mgr Paul Nadal, former vicar-general of Durban archdiocese, led the session at Holy Trinity parish in Musgrave Road on the theme “Myths, Miracles and Misconceptions of the Catholic Church”.

It was primarily geared towards members of Holy Trinity’s Faithwalkers’ youth group, who had organised the session. Parishioners and non-parishioners were also in attendance.

Many questions and concerns were raised by the youths and addressed by Mgr Nadal, such as the legitimacy of Marian apparitions, incorruptible corpses and the Stigmata; dispelling myths such as the existence of the Holy Grail and the mark of Cain; and breaking down misconceptions of papal infallibility, priestly celibacy in relation to paedophilia, and the Catholic Church’s stance towards science, homosexuality, and the ordination of female priests.

Lively exchanges occurred during the session, according to parishioner Rea Mina.

“Mgr Nadal told me afterwards that he enjoyed it,” said Ms Mina.

“I think young people benefited greatly from the talk with Mgr Nadal, who obviously had a great rapport with them,” she said.

“Clearly the Church’s stance on these issues and more were of great importance to them, and I hope they gained a deeper understanding.”