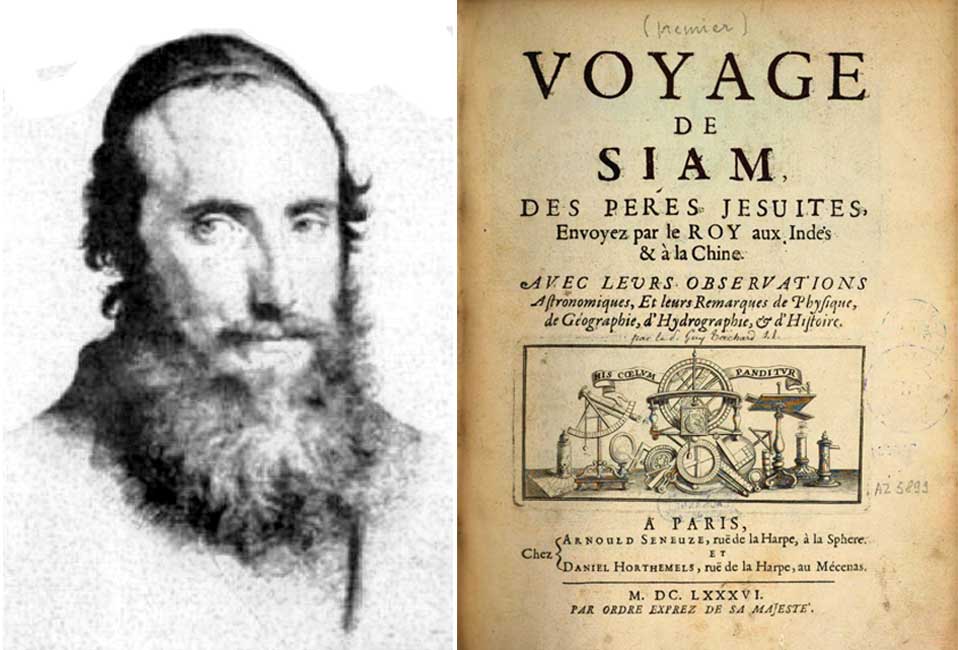 (Left) Jesuit Father Guy Tachard. (Right) The original cover of Fr Tachard’s first travelogue, which included his account of visiting the Cape in 1685.

Jesuit Father Guy Tachard, an astronomer and something of a secret agent, visited the Cape of Good Hope in 1685 and again two years later. While he was received with courtesy, he and the other priests on board the French ship they travelled on were not allowed to say Mass on land.

Just over three decades after the Cape was colonised, a Jesuit priest landed in Cape Town. He was warmly welcomed — and told not to say Mass on shore, according to MARTIN KEENAN.

Every historian of the Cape Colony names or at least alludes to  a French Catholic priest who landed in Cape Town just 32 years after the region was colonised by the Dutch.

Jesuit Father Guy Tachard landed at the Cape of Good Hope in the course of two voyages made with a French state embassy to the king of Siam, in 1685 and 1687.

Fr Tachard published accounts of both voyages (the first in Paris 1686, the second in Paris and Amsterdam in 1689). The earlier was translated into English in 1688.

Fr Tachard (1651–1712) was not a missionary but a scientist — and more secret agent than diplomat. All the same, in the account of his first voyage he yearned for zealous missionaries to bring the Gospel to the “Hotentates” and African tribes even further in the interior.

In his essay “European Affairs (from the Cape Records of 1688)”, Judge Egidius Benedictus Watermeyer, the 19th-century “father of South African history”, notes the French priest’s pleasant surprise at the warmth of their official reception at the Cape.

It was in dramatic contrast with the piratical treatment of a ship from the 1687 flotilla which was back at the Cape on April 26, 1689, returning from India with a valuable cargo. The “Normande” was attacked by stealth, her crew taken prisoner, and the ship plundered.

When her sister ship, the “Coche”— with even greater treasure — reached Table Bay two weeks later, she found the captured “Normande” still under French colours, so her defences were down. She fell before a night-time assault and suffered the same fate.

The explanation lay in the changed political situation in Europe in 1688 as a result of the invasion of England by the Protestant Stadholder William of Orange and the flight of the Catholic Stuart royal family to France.

The announcement of an Anglo-Dutch alliance occurred in May 1689. Declarations of war with France followed.

Alexander Wilmot, a Catholic, wrote the first continuous narrative history of the Cape Colony, published in 1869. He noted the same striking change in the reception accorded French ships in the 1680s, but he wrote no more about Tachard than Watermeyer had.

It was George McCall Theal who extended the range. In his first volume of History (1888), he reports the arrival of the French embassy with six Jesuit missionaries, two of whom were astronomers, in 1685.

He noted their courteous treatment by Governor Simon van der Stel and Hendrik van Rheede, the commissioner of the Dutch East India Company.

Van der Stel and the priests

Fr Tachard was permitted to set up a temporary observatory in a pavilion in the Dutch East India Company’s garden, where Tuynhuis would later be built, during their stay, from May 31 to June 7.

Van der Stel took time to explain to the priests the (still brief) history of the colony, and instructed them extensively about the flora and fauna of the Cape.

When they left, the priests presented van der Stel with a microscope and a small burning glass.

Theal, in his history, wrote that the priests “were not permitted to conduct public worship on shore”. But Fr Tachard in his writings did not quite say “public worship”, thereby implying toleration for private devotions.

Fr Tachard described his interactions with the Catholics of the Cape: “In the mornings and evenings they came privately to us. There were some of all countries and of all conditions, free, slaves, French, Germans, Portuguese, Spaniards, Flemings, and Indians.”

Those whose languages were unintelligible to the priests pulled out rosaries and medals to prove their faith. The priests heard the confessions of those they could understand and, Fr Tachard says, “we visited the sick in their houses and in the hospital”.

Perhaps Theal was thinking of the priests on a Portuguese ship which Fr Tachard mentions in his second travelogue: the “Nossa Senhor de los Milagros”, wrecked off Cape Agulhas in mid-April 1686. Survivors made it to the fort three weeks later.

According to Theal, the Council of Policy resolved that the Portuguese ship’s crew and soldiers be lodged in the hospital, and the officers and priests at Rondebosch. They were given rations and other assistance, but “the priests were required not to give offence to the inhabitants by public celebration of their worship”.

Compare the action taken by Jan van Riebeeck back in 1660 when the “Marichal”, another French ship, ran into trouble and the crew and passengers were allowed ashore on strict conditions: firearms were to be handed over until departure, and the clergy was forbidden to hold public assemblies for Catholic worship. 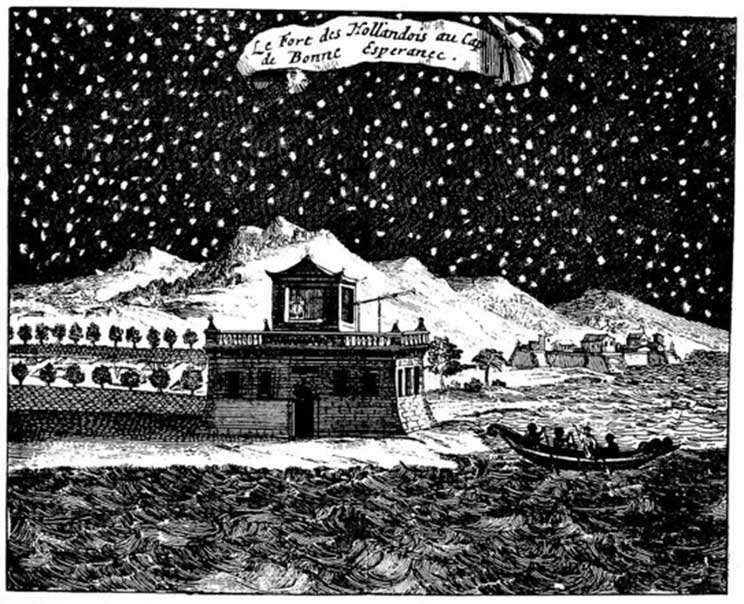 An artistically fanciful drawing of Fr Guy Tachard’s observatory in the VOC Gardens at the Cape of Good Hope, 1685.

Three years after Theal’s volume appeared, the prominent Cape Town priest Mgr Frederick Kolbe wrote some history articles for The South African Catholic Magazine. Possibly he knew of Tachard’s work before reading Theal. At all events, Mgr Kolbe printed a long extract from Tachard describing the situation of the Catholics at the Cape in 1685. That is to say:

The restriction was that the local Catholics had not “la liberté” to hear Mass on board and the priests had no liberty to say it ashore.

So before and after Fr Tachard’s visit, priests calling at the Cape were forbidden to hold public assemblies for Divine Worship.

In part it was a security issue, but we know that in the Dutch colonies the same laws were observed as in Holland, where the only officially authorised worship was according to the Dutch Reformed tradition.

Lutherans in Cape Town repeatedly petitioned for a church and permission was finally granted in 1779. So whatever the policy was, it wasn’t specifically anti-Catholic. We also know that before they received permission, the Lutherans had been using a warehouse for their services. In practice there was some religious toleration.

This was also the case in Holland in the 17th century, although Catholic priests were liable to be imprisoned. The authorities might respond to a formal complaint, but even where they did, a timely bribe could restore the situation to normal.

If there was toleration in practice in Holland, why would the law be enforced more rigidly in the colonies? If a priest had stayed at the Cape, is it possible his presence might have been tolerated too?

Fr Tachard’s account of his first voyage, in a passage never previously remarked upon by historians, offers evidence it might have been had Catholic priests settled at the Cape in the 17th century.

From the Cape, the French ambassadors proceeded to another Dutch colony, Batavia (today’s Jakarta, the capital of Indonesia), where they arrived on August 18, 1685. Fr Tachard heard that two missionary priests, whose ship had been driven off course the previous December on its way to Siam, had gone ashore.

They were an aged Italian Jesuit, Fr Fucity, and the Portuguese superior of the mission in Tonkin, Fr Fereira, who had left for Macao. Fr Fucity was still there and Fr Tachard hurried to meet him. This is what he learnt (English translation of 1688):

“When the Arrival of those two Fathers was known at Batavia, not only the Portuguese who live there, but the Catholics also of other Nations that are there, as we were told, in great numbers, came daily to see them, were present at their Masses on Sundays and Holy-days, and confessed to them.”

Then he noted on Fr Fereira’s departure: “The zeal of the Catholics made too great a noise, at Batavia, and so great was the concourse of People that came flocking to Father Fucity, that the Protestant Ministers complained to the General, that a Jesuit performed the publick Exercise of the Catholic Religion in Batavia.

“Upon their Remonstrances, the General set a Sentinel at the Father’s door, to hinder Catholics from entering his House, and sent him word that he desired him not to walk abroad in the Town, but with a Guard to wait upon him.”

Fr Tachard next had an audience with the governor who, hearing of the reception given the Jesuits by van Reede at the Cape, “protested he would not be short of him and that if we had a design to come on Shoar, he entreated us to lodge with Father Fucity, to whom from that day forward he gave all sort of liberty for our sakes”.

All the indications are that, given the right conditions, Catholic practices — including Holy Mass — could be tolerated in the Dutch colonies even in the 17th century.

In the 18th century the principle of religious toleration began to spread in the Netherlands. Under a placaat of 1730 issued by the states of Holland and West Friesland, Catholic churches could be licensed, and Holy Mass was no longer illegal.

Equivalent legislation was passed in Great Britain in 1791 and in Ireland in 1793.

The time has come to accept that the Catholic religion was not uniquely banned at the Cape of Good Hope, and to admit that the evidence generally cited does not prove the authorities — Dutch and British — rigidly enforced a specifically anti-Catholic policy there.

This article was written shortly before Martin Keenan’s sudden death in late 2017.