Cardinal: Communion Cannot be Shared with Friends like Beer or Cake 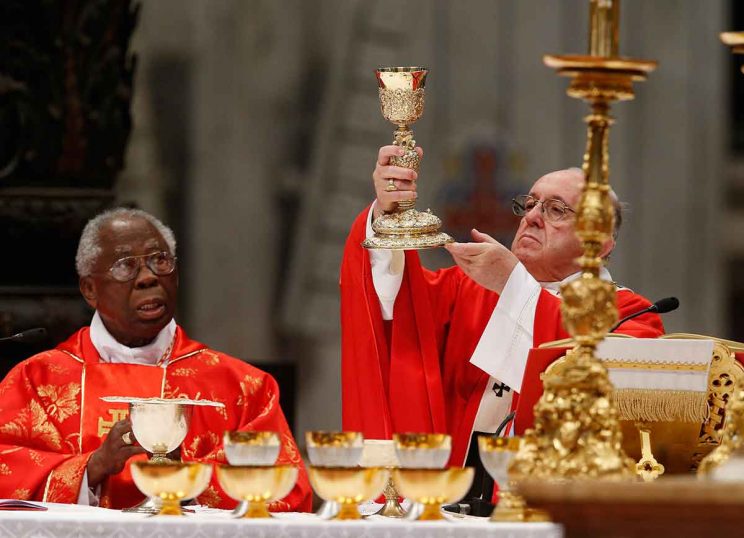 Holy Communion is exclusively for Catholics in a state of grace and not something to be shared between friends like beer or cake, said a former senior adviser to two popes.

Nigerian Cardinal Francis Arinze said any moves to give greater access to Communion to divorced and remarried Catholics and to non-Catholic spouses of Catholics represented “serious” challenges to the teaching of the church on the Eucharist.

In an interview with Catholic News Service, he implicitly objected to interpretations of Pope Francis’ 2016 apostolic exhortation “Amoris Laetitia” that would permit divorced and remarried Catholics who had not received an annulment to receive Communion in certain circumstances.

“If a person is divorced and remarried (without the first marriage being annulled) then there is a problem,” said Cardinal Arinze, adding that Jesus taught that their arrangements constituted adultery.

“It is not we who made that (teaching),” said the cardinal, 85, who served as prefect of the Congregation for Divine Worship and the Sacraments under St. John Paul II and now-retired Pope Benedict XVI. “It is Christ who said it.”

“We cannot be more merciful than Christ,” he continued. “If any of us says he has permission from Christ to change one of the major points Christ gave us in the Gospel, we would like to see that permission and also the signature.”

“You can see that it is not possible,” he said. “Not even if all of the bishops agree, it doesn’t become so. It is rather serious, because it touches the faith on the Holy Eucharist and also that marriage cannot be dissolved between Christians who have lived together and no human power can dissolve it. It is rather serious.”

In his interview at Buckfast Abbey, a Benedictine monastery, Cardinal Arinze also said that sharing Communion with Protestant spouses was not an issue of hospitality.

He said that while he wished other Christians well it was important to understand that “the Holy Eucharist is not our private possession which we can share with our friends.”

“Our tea is such and also our bottle of beer. We can share those with our friends,” Cardinal Arinze said.

“It isn’t just that we wish one another well. After Mass you can go to the refectory and have a cup of tea and even a glass of beer and a bit of cake. That’s OK. But the Mass is not like that,” he added.

“It is very important to look at the doctrine,” he said. “The eucharistic celebration of the Mass is not an ecumenical service. It is not a gathering of those who believe in Christ and who invent a prayer for the occasion, it is a celebration of the mysteries of Christ who died for us on the cross, who made bread into his body and wine into his blood and told the apostles ‘do this in memory of me.’

“The eucharistic celebration of the Mass is the celebration of the faith community – those who believe in Christ, they are communicating in the faith, and in the sacraments, and in ecclesiastical communion … ecclesiastical unity with their pastor, their bishop and the pope. It is the community which celebrates the holy Eucharist. Anybody who is not a member of that community does not fit in at all,” he said.

He said if Protestants wished to receive Holy Communion in Catholic churches then they should become Catholics.

“Come, be received into the church, and then you can receive Holy Communion seven times a week. Otherwise no,” said Cardinal Arinze.

The cardinal flew into England from Rome May 22 to attend a May 24 Mass in celebration of the millennium year of the founding of Buckfast in 1018. The abbey was dissolved by King Henry VIII during the Protestant Reformation of the 16th century, but it was rebuilt a century ago on the exact site.

His comments were made amid a controversy over the German bishops’ pastoral handbook titled, “Walking with Christ – In the Footsteps of Unity: Mixed Marriages and Common Participation in the Eucharist.”

Pope Francis has invited leaders of the German bishops’ conference and some of the bishops opposed to the guidelines to travel to the Vatican for a discussion with officials from the three offices.

The text of the guidelines has not been made public, but it is widely assumed to foresee situations in which a Lutheran married to a Catholic and attending Mass with the spouse could receive Communion regularly.

It follows ongoing confusion within the church about what scope “Amoris Laetitia” allows concerning Communion for divorced and remarried Catholics whose previous marriage was not annulled.

Some bishops’ conferences, such as those of Germany and Malta, have interpreted the papal exhortation liberally, while others insist that church teaching and practice remains unchanged and unchangeable.

Pope Francis has declined to issue a clarification on the contentious points of the document and has effectively ignored a dubia, or list of questions, submitted in 2016 by four cardinals, two of whom are now deceased. By Simon Caldwell Catholic News Service