The Pope and the Martyr: New Saints offer a Road Map to Holiness 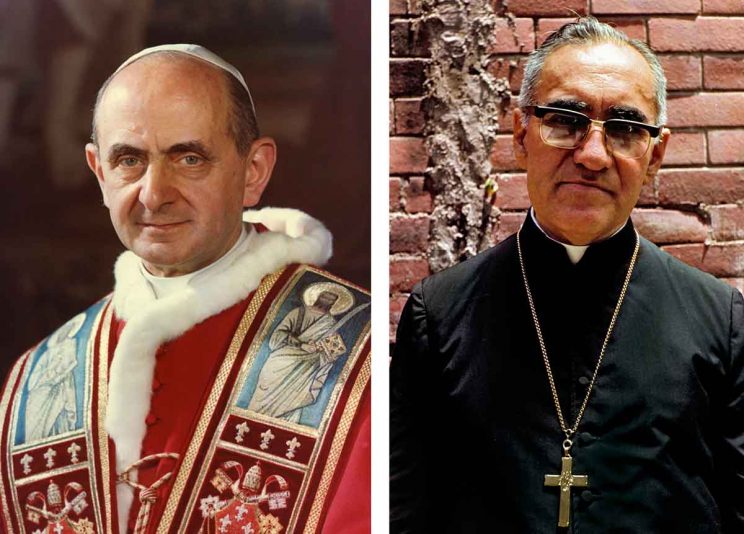 The Catholic Church has its share of young saints who gave witness through their lives that holiness can be attained even at a young age.

Others, like Blesseds Paul VI and Oscar Romero, show that the path to holiness begins early. The two will be declared saints Oct. 14 during the Synod of Bishops on young people and discernment.

Although Pope Paul VI is best remembered for seeing the Second Vatican Council through to its end and helping implement its far-reaching reforms, his journey toward holiness began much earlier in life, said Father Claudio Zanardini, rector of the Basilica di Santa Maria delle Grazie in the northern Italian province of Brescia, where Blessed Paul VI celebrated his first Mass May 30, 1920.

“We here in Brescia are trying – at Pope Francis’ request – to make Paul VI’s younger years more known. That is, how he lived his time of vocational discernment and his formation so that he can become a model for young people who are on their own path of formation,” Father Zanardini told Catholic News Service.

Born Giovanni Battista Montini in 1897, the future pope and his brothers would attend youth meetings organised by the Oratory of St. Philip Neri in Brescia.

Father Zanardini told CNS that those gatherings were a time of “spiritual and human formation” for Blessed Paul, where he built friendships and adopted the local priests’ charism of ministering to young people.

Blessed Paul’s relationship with his family as well as a “deep sense of prayerfulness and an acute involvement in the social issues of his time were one of the legacies of his parents and brothers,” Cardinal Luis Antonio Tagle of Manila told CNS.

“The family atmosphere centred on faith and the common good prepared him to be a discerning person: listening to God’s word and the world; being at home in the solitude of prayer, which gave him the most profound experience of communion and the decisiveness to pursue a discerned choice,” Cardinal Tagle said.

Father Zanardini told CNS that Blessed Paul’s canonization would be “a beautiful sign that he truly is a pope who still has much to say” to young men and women today.

Blessed Paul VI was also remembered as a strong leader who was close to Catholics who suffered persecution, including the archbishop of San Salvador who will be declared a saint along with him: Blessed Oscar Romero.

While visiting the pope on June 21, 1978, Blessed Romero wrote in his diary that Blessed Paul encouraged him to “proceed with courage, with patience, with strength, with hope.”

Born in Ciudad Barrios, El Salvador, Blessed Romero entered a minor seminary at the age of 13. During his years of priestly ministry, young Romero served the poor and the suffering of his country.

In 1977, Blessed Paul VI appointed him to lead the archdiocese of San Salvador during a tumultuous time when priests and religious who stood with the poor were targeted by right-wing paramilitary groups aligned with the government.

Italian Archbishop Vincenzo Paglia, the postulator of the Salvadoran archbishop’s cause, told CNS that Blessed Romero’s canonization is a “great opportunity to rediscover the primacy of love that must characterize, energize and excite today’s generations, today’s young people.”

Archbishop Paglia cited a letter sent by G. Mirna Garcia, a 17-year-old Salvadoran girl, to Blessed Romero in which she thanked him for fighting for her peoples’ rights and dignity.

“In reading and listening to your homilies, I recognize that you have shown the path for our salvation,” she wrote to the archbishop. “Harder days will come and faith will sustain us in those days, the certainty that God is with us and if he is with us, nothing will be against us.”

Salvadoran Mercy Sister Ana Maria Pineda, associate professor of religious studies at California’s University of Santa Clara, told CNS that her students see in Blessed Romero “the best of what they hope for in church leaders” and identify with his humanity as a person with both “gifts and limitations.”

It was Archbishop Romero’s determination “to overcome his limitations in order to follow God’s call that the students most identify and find encouragement for themselves in their own struggles and challenges,” she said.

Julian Filochowski, chair of the U.K.-based Archbishop Romero Trust, told CNS Sept. 27 that Blessed Romero brought an authenticity to the Gospel message in words and deeds that attracted young people in El Salvador.

“He was not a populist politician dressed in a cassock. Rather a humble and self-effacing pastor seeking to love God, love the poor and love the church,” Filochowski said.

“People, especially young people, can sense this,” he said, “and at such a difficult time for the hierarchical church, he stands as a shining example of authenticity in his faith, a beacon of hope radiating unconditional love for his people.” By Junno Arocho Esteves Catholic News Service