What We Can do for Souls in Purgatory 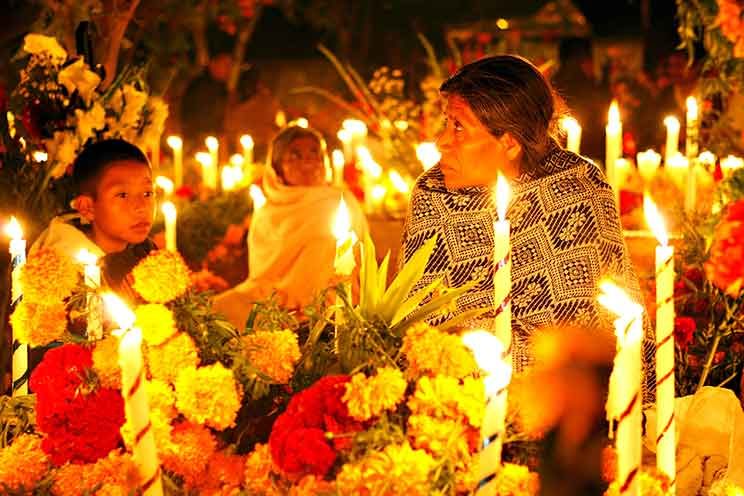 People sit next to the graves of their relatives during the Day of the Dead in Santa Maria Atzompa, Mexico, on November 1. In his article, Prof Michael Ogunu explains what we can do for the souls in purgatory. (Photo: Jorge Luis Plata, Reuters/CNS)

By Michael Ogunu – According to the Catechism of the Catholic Church, all those who die in God’s grace and friendship, but still imperfectly purified, are indeed assured of their eternal salvation; but after death they undergo purification, so as to achieve the holiness necessary to enter the joy of heaven.

The Church gives the name purgatory to this final purification of the elect, which is entirely different from the punishment of the damned.

The practice of special devotion to the souls in purgatory in the month of November is an old tradition in the Catholic Church.

This article describes twelve means of relieving the suffering of the souls in purgatory, according to Catholic tradition.

The first effect of a beloved person’s death is grieving. Then follow the preparations for burial and visits of condolence. The suffering souls do not receive the least benefit or consolation from a showy funeral.

The Church Fathers, such as St Jerome, severely condemned the practice of pompous funerals and earnestly exhorted us to aid in having burials performed according to the rites of the Church.

The ceremonies of the Church, the bearing of the cross, the ministers in their sacred vestments, the blessings, incense, holy water, blessed candles and the consecrated ground are all replete with abundant consolation for the departed soul.

The holy sacrifice of Mass has always been considered by the Church to be the most effective means of releasing the souls of the faithful departed from their torments.

Our prayers, and still more the prayers and intercessory petitions of the Blessed Virgin Mary and the saints, bring relief to the suffering souls. But what is the prayer of heaven and earth compared with Holy Mass? In prayer a creature intercedes for a creature; in Holy Mass Jesus Christ, eternal God like his Father, makes intercession for us.

This Mass is undoubtedly the most powerful means to release the holy souls from their place of torment.

The official Prayer of the Church has an essential and particular efficacy of its own. It is more powerful to obtain graces and benefits from God than the prayer offered privately by individual persons, however pious and holy they may be.

Besides the holy sacrifice of the Mass for the dead and the absolution, the Church has ordained also the recitation of a special Office of the Dead.

This is handed down to us from the earliest ages of Christianity, and gives evidence of the ardent charity and devotion with which the Church implores mercy at the throne of God and intercedes for her suffering children.

Frequent and worthy reception of Holy Communion is a most excellent means whereby we can pay off all our own indebtedness, and most effectually help the suffering souls.

St Bonaventure observed: “Let charity and compassion for your neighbours urge you on to approach the sacred Table; for nothing is so effectual as Holy Communion to obtain relief for the suffering souls.”

A most appropriate prayer for the faithful departed is the Rosary. The Blessed Virgin herself assured us through St Dominic that “the release of the souls in purgatory is one of the chief effects of the Rosary”.

The two most efficient means of obtaining the grace of God for ourselves and others, and thereby gaining heaven, are the sacraments and prayer.

Almsgiving for the suffering souls help to atone for our own sins of extravagance, and sins proceeding from the abuse of wealth. The punishment of purgatory is inflicted on many a soul who during its earthly life was wanting in charity to the poor. By giving alms for the suffering souls we atone on their behalf for their want of charity while on earth.

By fasting we chastise our body, refuse gratification to its appetite, give strength to our soul and pleasure to the whole spiritual being. Fasting is directed against all forbidden pleasures and enjoyments. By fasting therefore, we atone for the sins committed by and against our body.

Instead of applying this atonement for ourselves, we can offer it to Almighty God in union with the fast of Christ in favour of the suffering souls.

According to the doctrine of the Church, the guilt of sin and its eternal punishment is remitted in the sacrament of Penance.

The temporal punishment due to sin however is not always remitted entirely in the sacrament of penance. This remaining temporal punishment, as long as it is not remitted, must be suffered either in this world or in purgatory, before we can enter heaven.

It has always been the practice of the popes to grant numerous indulgences applicable to the suffering souls; by gaining of which indulgences we cede to these imprisoned friends of God so much remission of temporal punishment as we would have obtained for ourselves.

When we take holy water and sprinkle ourselves or our surroundings with it, the prayer of the Church ascends to heaven, drawing down blessings upon us and on the objects that are sprinkled with it.

Holy water may be used not only for the purpose of benefiting persons present, but may also be applied for the absent and especially for the suffering souls. In this case the prayers of the Church ascend to heaven in favour of the person or soul intended to be helped.

God himself in the Old Testament ordained that lights should be used in his temple and at religious rites performed there.

Under the Christian dispensation, the use of lights was retained not only when the sacred mysteries were celebrated at night during times of persecution, but also during the day. In the early Church those selected to take care of the lamps and candles were specially ordained for this purpose.

The joint intercession, the increased devotion, the multiplied grace, the virtues and merits of brethren united in God are powerful means of moving the heart of a God so fail of compassion for his children in distress.

The following conditions must be observed in order that our good works for the souls in purgatory may be accepted by God:

We loved our departed ones in life, let us remember them in death. Eternal rest grant unto them, O Lord, and let perpetual light shine upon them.

Pope: St Anthony Of Padua Is An Inspirational Model For Today
Share