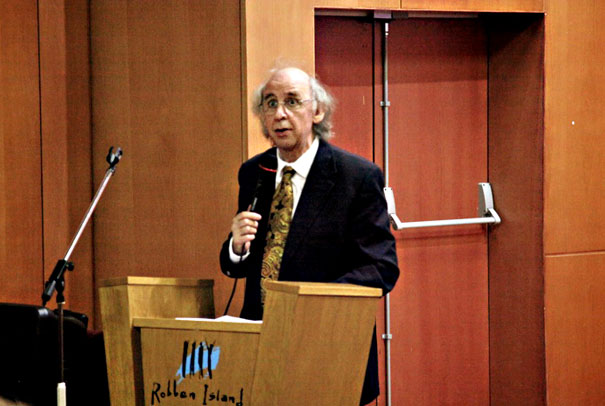 As Catholics and Protestants stood shoulder-to-shoulder in the long struggle for Ireland’s nationhood, so did all South Africans in the struggle for their country’s liberation, according to the keynote speaker at an exhibition on the Irish and South African liberation struggles.

The exhibition, “Call for Freedom: Ireland and South Africa”, at the Nelson Mandela Gateway to Robben Island on Cape Town’s Waterfront, is organised by the Irish South African Association.

Professor Donal McCracken, a historian at the University of KwaZulu-Natal, said the Irish Anti-Apartheid Movement (IAAM) “was one of the most successful of external pressure groups against the apartheid government” from 1963 to the 1990s.

In part, this was due to its strong leadership in exiles such as Kader Asmal and his Irish wife Louise, Prof McCracken said. But the movement also had the support of Irish intellectuals, academics, clerics, the media and politicians.

He recalled that when Nelson Mandela visited Ireland in 1990 to receive the Freedom of Dublin, which he had been awarded while still jailed, “Ireland’s welcome to him rivalled only that of the famous 1963 visit to Ireland of President John F Kennedy”.

Prof McCracken noted that Denis Hurley, the future archbishop of Durban, spent his youth on Robben Island while his Skibbereen-born father tended its old lighthouse.

The exhibition will run until October 30. Entrance is free.

For more on the Irish South African Association www.ireland.co.za