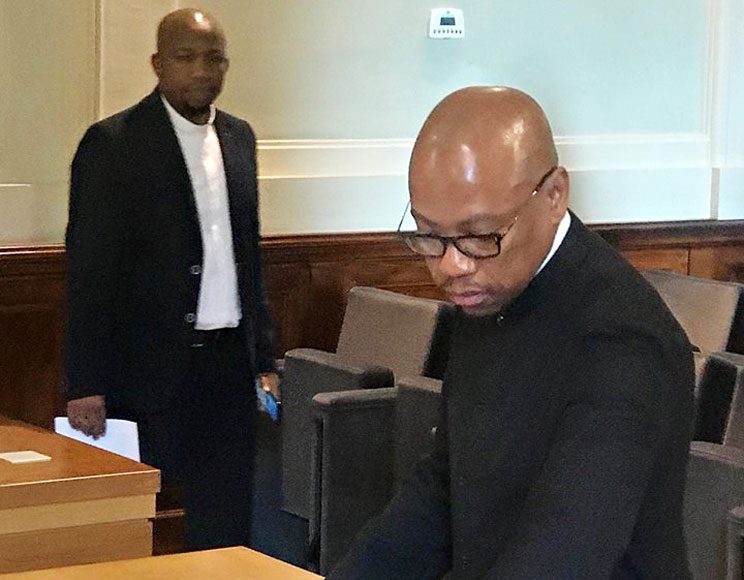 Fr Michael Seheri, a priest of the archdiocese of Johannesburg, during the defence of his doctoral thesis at the Pontifical University of the Holy Cross in Rome this month. Fr Seheri, who has been in Italy for eight years, will return to South Africa on December 4.

Having completed his doctorate in Rome, a Johannesburg priest will say farewell to his parish in Italy and return to South Africa in December.

Fr Michael Seheri, of the archdiocese of Johannesburg, has lived in Italy since June 2010. He successfully defended his doctoral thesis, “The Abrahamic Covenant: A Study From a Canonical Perspective”, at the Pontifical University of the Holy Cross (or Santa Croce).

“It took me almost four years to complete the doctoral programme,” Fr Seheri told The Southern Cross from his parish in the Italian diocese of Ischia.

Fr Seheri, who grew up in Naledi, Soweto, was ordained on March 29, 2009, in Potchefstroom by Bishop Zithulele Mvemve of Klerksdorp, and before going to Italy served at Our Lady of Lourdes parish in Wolmaransstad. He is now incardinated in the archdiocese of Johannesburg.

While pursuing his studies, Fr Seheri served as assistant parish priest at Sant’Antonio Abate parish in Ischia, near Naples in the south-western Campania region of Italy.

He missed home — “my family and friends, our vibrant society,  and celebrating Mass in the vernacular”— but would not trade his time in Italy for anything.

“The experience has been amazing. It presented me with the opportunity to exercise my pastoral ministry,” Fr Seheri said.

“I celebrated the Eucharist daily, I heard confessions, I visited the sick, I preached, I buried the dead, and so forth,” he said.

“The Italian parishioners welcomed and profoundly appreciated my presence among them. They were respectful towards me; above all, they respected my priestly identity.”

Fr Seheri said that his being African made no difference to his parishioners. “The fact that I was, as they call me here, un prete di colore — basically, a black priest—was never an issue for them. They appreciated the fact that they had a priest among them.”

Indeed, the priest felt a connection between his parishioners and African culture.

“To a certain degree, Italians are like Africans, in the sense that they have and practise ubuntu. Or better yet, one could say they subscribe to our sacrosanct principle of ubuntu which indicates, inter alia, benevolence towards others,” Fr Seheri noted.

“They joyfully welcomed me into their homes. I have been with these parishioners for almost eight years and my relationship with them has always been conditioned by mutual respect, which recognised and valued one another’s integrity.”

The pastoral experience Fr Seheri gained in Italy will find application back home, he said.

“I have been considerably nourished and humbled by my pastoral experience here. In general, Italians are very devout and staunch Catholics; as such, through observing their impressive and inspiring commitment to the faith, I was inspired to become a better priest,” Fr Seheri said.

“This experience has inspired me to focus not only on academic matters, but also to go out to the periphery and reach out to the marginalised, the downtrodden, the suffering, the sick, the elderly, and so on,” he added. “In essence, it has made me a better priest and I would not trade it for anything.”

Along with his doctorate, Fr Seheri will bring this experience with him when he returns to Johannesburg on December 4.