Big Bang to be Named in Honour of Priest 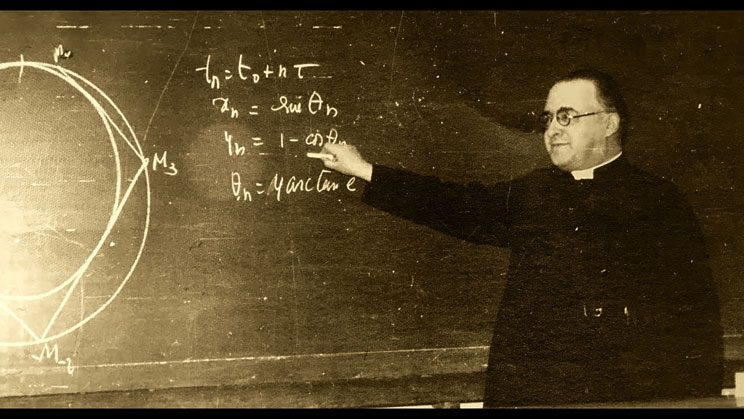 =Belgian Fr Georges Lemaître demonstrates his theory. An electronic vote among all members of the International Astronomical Union voted 78% to recommend changing the name of Hubble’s law (expanding universe) to the Hubble–Lemaître Law. Fr Lemaître called his theory on the origin of the universe “the hypothesis of the primeval atom” or the “Cosmic Egg”.

The International Astronomical Union has voted in favour of a recommendation to rename the official term for the Big Bang Theory to acknowledge the contributions of Belgian priest and astronomer Georges Lemaître to the scientific theory of the expansion of the universe.

“To honour the intellectual integrity and the supremely significant discovery by Georges Lemaître, the IAU is pleased to recommend that the expansion of the universe be referred to as the Hubble-Lemaître Law,” the association said. At present the law acknowledges only the US astronomer Edwin Hubble.

Fr  Lemaître, who died in 1966, was a physicist and mathematician who is widely credited with developing the Big Bang Theory to explain the physical origin of the universe.

Hubble’s Law describes how objects in the expanding universe move away from each other with a velocity proportional to their distance apart.

The IAU is an international organisation of professional astronomers, and is the internationally recognised authority for naming celestial bodies.

Fr Lemaître published a paper in 1927 discussing the rate of the expansion of the universe, but “the limited popularity of the journal in which Lemaître’s paper appeared and the language used made his remarkable discovery largely unperceived by the astronomical community”, according to the resolution.

The resolution also noted that Fr Lemaître, an IAU member since 1925, exchanged views about redshift with Hubble at the third IAU general assembly at Leiden, Netherlands in 1928.—CNA