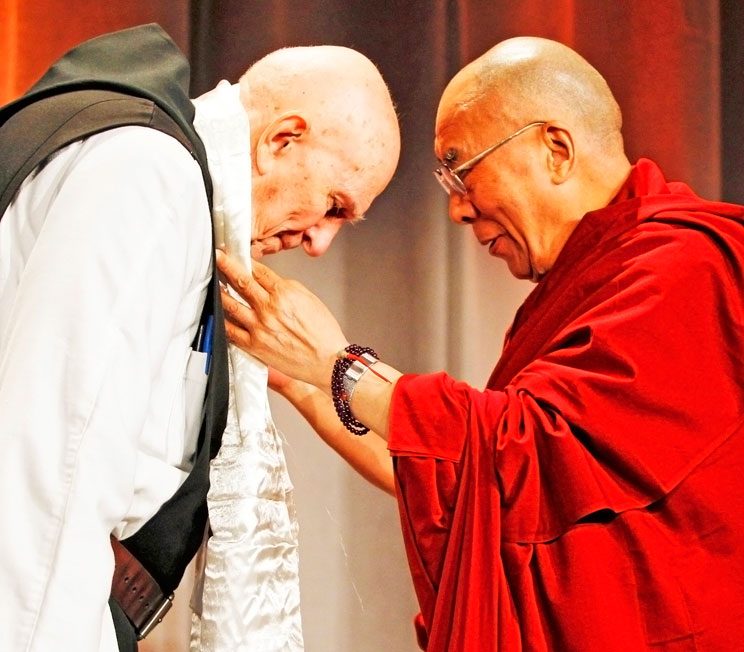 Trappist Father Thomas Keating (left) receives a gift from the Dalai Lama, Fr Keating, who was one of the principal architects and teachers of the Christian contemplative prayer movement, died at age 95. (Photo: Jessica Rinaldi, Reuters/CNS)

A funeral Mass was celebrated in Massachussetson November 5 for Trappist Father Thomas Keating, a leading figure in the centering prayer movement that got its start in the 1970s.

Pledging to God to become a priest if he survived a serious childhood illness, Joseph Keating entered the Cistercians’ monastery in Valley Falls, Rhode Island, in 1944 and was ordained a priest in 1949. He took the religious name Thomas due to his admiration of St Thomas Aquinas.

He turned to centering prayer — a technique of praying silently to God without words — based on the encouragement issued by Pope Paul VI during the Second Vatican Council to rediscover the contemplative tradition.

Fr Keating helped to found Contemplative Outreach for centering prayer practitioners in 1984, serving as its president from 1985-99.

The irony for the Trappist is that, to promote centering prayer, he left the confines of the monastery to speak at conferences worldwide, including a visit to South Africa.

“Human nature has a dimension that requires silence,” Fr Keating said in 1990. “The tendency had been to put people interested in the contemplative life in a convent or monastery to protect them from us —or us from them,” he joked.

READ  St Francis Showed us the Path to Peace

Fr Keating was a prolific author. The Contemplative Outreach website has a page listing 28 books — several of which made the Catholic bestseller lists. He described in 2001 how one gets started in centering prayer. “The great battle in the early stages of contemplative prayer is with thoughts,” he wrote.