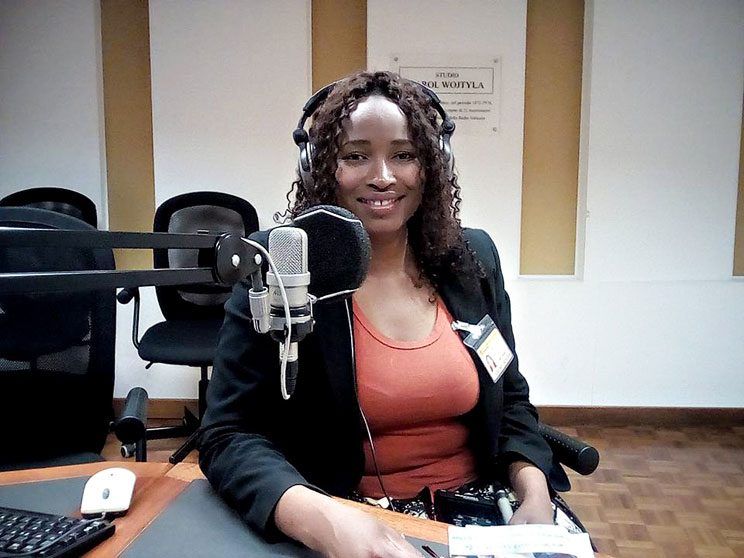 Radio Veritas presenter Sheila Pires in a studio at Vatican Radio in Rome. Ms Pires was a Southern African representative at the Catholic Women Speak conference in Rome.

A South African representative to a Catholic women’s conference in Rome last month has called for a synod on women.

“I think that the Church should create spaces for dialogue, have more conversations with women,” said Radio Veritas presenter Sheila Pires, proposing “a synod that would look at the role of women in the Catholic Church”.

Women in the Church

At the Catholic Women Speak conference in Rome, she noted that the needs of Catholic women in Africa or India differ from those in Europe or the US.

“What I gathered from the conference is that we have different approaches,” said Ms Pires, who represented Southern Africa alongside theologian Nontando Hadebe.

“For example, in South Africa, Catholic women have prominent positions in the Church through sodalities and other lay movements,” she said.

“However, in other African countries that are still trying to recover from civil wars or are working on legislation concerning the rights of women, women are not that worried about leadership positions in the Church as they serve the Church.”

Ms Pires said Catholic women from other parts of the world, such as India, face similar challenges, whereas European or North American Catholic women want to see a Church that gives them more prominent positions.

Her trip to Rome coincided with the Synod of Bishops on the youth.

“The youth have a deep desire to walk with the Church and to be heard, but they feel abandoned” she said. “Hence the main point, repeated over and over again, was ‘Listen to young people.’”

“Young people want a place they can call home in an era filled with fake news. The Church and parents need to move with the times, to make use of the digital world we live in, and listen to young people.”

She recalled many highlights of her Rome trip, including chairing a discussion at the conference on “Sharing our stories: Cultures and Catholicism”, and “meeting strong and powerful women who are unafraid to fight for change”.

From the perspective of a radio journalist, Ms Pires was inspired by interviewing many Catholics, and by “my daily walks to Vatican Radio and meeting the staff there”.

“Seeing Pope Francis in person on several occasions — that was more than I had bargained for,” she said.

Another unforgettable moment was attending the Mass for the feast of Our Lady of the Rosary, celebrated by Cardinal Arlindo Gomes Furtado of Cape Verde.

“To be with the Cape Verdean community in Rome was an emotional experience—to meet people from my grandfather’s home,” Ms Pires said.

Sheila Pires’ “Catholic View” programme broadcasts on Radio Veritas on Tuesdays, Wednesdays and Thursdays from 18:30 to 19:00.