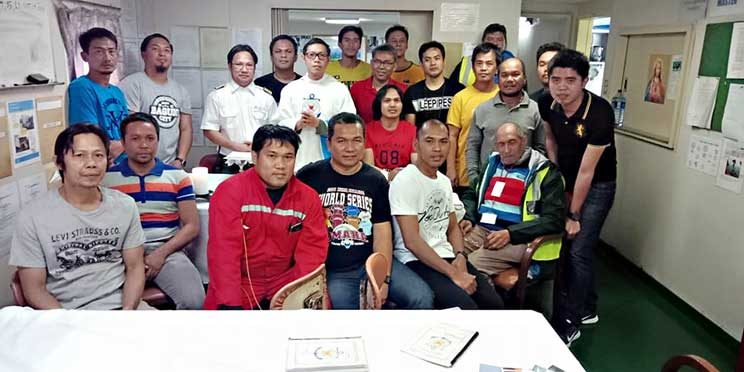 Father Rico Talisic, a new ship-visitor in Cape Town, celebrated his first onboard Mass for a group of sailors.

Fr Talisic is a Scalabrinian priest from the Philippines and now ship-visits for Catholic seafarers’ charity Apostleship of the Sea (AoS) in the archdiocese.

He accompanied two other AoS ship-visitors, Gerard Assam and Anthony Erispe, on board the bulk carrier MV Paulo U.

The ship has a crew of 21, all of whom are Filipinos, and was in port for five days to offload grain.

Captain Joseph Balbido, the ship’s master, asked for Mass on board as the crew would not get the chance again for several months at sea.

The seafarers were grateful for the chance to celebrate Mass, which they said would help sustain their faith during the long voyage.

Two Kenyan sailors from another vessel were also present at the Mass.