The New Year: A Time for Hope 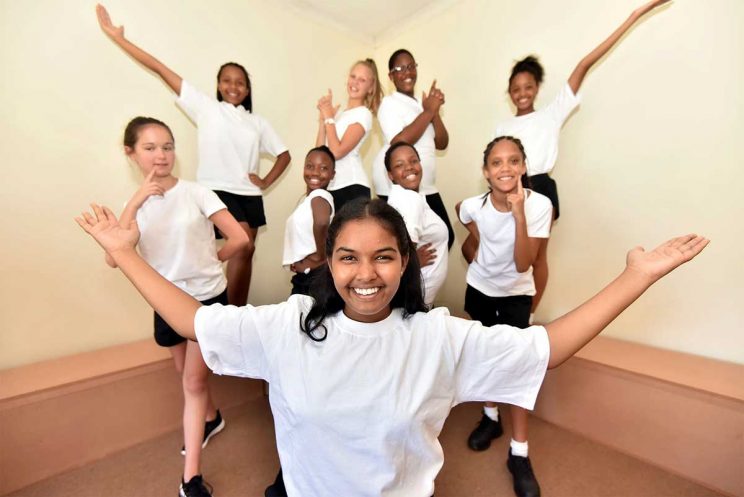 Students at the Drakondale Girls’ Choir School, which confounds despair.

As we go into a new year, I might be tempted to some degree of despondency. Last year was a tough year.

I am put in mind of Queen Elizabeth II who in 1992, after seeing in one year the marriages of three of her children collapse and one of her castles almost burn down, declared it an annus horribilis.

The death of Paddy Kearney — my friend, my mentor and my boss — in late November has been a great blow to me and to many other people as well.

And then I look back over the year and see a whole series of deaths, most of them sudden, some of them violent. Each death leaves a hole that will not be filled—a sense of emotional emptiness but also an anxiety about the loss of people who helped get things done. Who will fill their shoes?

To that I can add the usual anxiety of anyone who runs an NGO — where will the money come from to carry on doing what we do, let alone to expand the services? And who are the competent managers I can rely on to just get on and do things?

To that I have to add the pain when people who should be a help turn out to be a frustration or indeed a source of harm. I encounter it in government but also sadly in the Church.

I am sure I am not the only reader of The Southern Cross who despairs at religious people (high and low) who claim to be helping the poor but end up doing the very opposite and then hide behind their office or religious language to justify their failures.

Meanwhile, the work to be done just gets bigger and bigger. Durban has always had a problem of homelessness. Three years ago with the Human Sciences Research Council we counted 4000 homeless people just in the Central Business District. And the problem has definitely got worse.

National television coverage of the problem has shone a useful light but has also put even more pressure on us to come up with solutions. The creation of a municipal taskforce (of which I am chair) to tackle homelessness should be a reason for hope, but at the moment just feels like a lot more work without any concrete delivery as yet.

These are all just my personal reasons to despair. I am sure you have your own as well and they might well be worse. To those we can all add in Trump, Brexit, Yemen, the Holy Land, climate change and loadshedding. And even the hopefulness of Ramaphoria has not lasted to the end of the year, with the rand still weak and fuel still expensive.

If I am layering the misery a bit, it is because that is what we can easily do when we allow the “bad spirit” to get hold of us. We see all the bad things—of which there are plenty—and we fail to notice or to give credit to the good things which are also there.

I can imagine Joseph at this time of year similarly totting up the debit side of his life: stuck in a draughty barn, a new baby to support, cut off from his business, a vulnerable young wife, odd visits from dirty shepherds, even odder visits from foreigners bringing highly impractical gifts, the prospect of a long journey home, and now rumours of death threats and having to flee to another country as a refugee. Could life be worse?

We know—as we hope that Joseph knew—that in the middle of that despair there was hope, light in the darkness. He would not yet have been able to read John 1, but he could have drawn comfort from Psalm 18: “For you will light my candle, the Lord God will enlighten my darkness”.

It is useful then that the Christmas story of hope comes at a time when we are most likely to be in despair. In the northern hemisphere, it is a story of light that literally comes when the days are at their darkest.

We each need to find ways of reminding ourselves of the sources of light in our lives and giving them space to shine. They may not instantly “overcome the darkness”, but they can help us to navigate our way through it.

I find immense joy in music, one of the moments that I find I can move above the day-to-day anxieties and be touched again by God’s spirit. I have found joy this year in making music (singing in choirs again after a long break) but also in hearing others make music.

We are blessed in Durban at having a fantastic Philharmonic Orchestra and visiting international soloists. But we also have world-class talent that is home-grown. So at my darkest point before Christmas, light came in the form of a choir of angels disguised as ordinary teenagers.

The Drakondale Girls’ Choir School was singing at Holy Trinity church in Musgrave Road, and their “Ceremony of Carols” (by Benjamin Britten and others) was for me a sublime insight into the eternal.

The school was created only two years ago by John Tungay, one of the original founders of the Drakensberg Boys’ Choir who is also the organist at St Joseph’s parish in Howick.

The 16 young women at the school—including a bursary scholar under the name of Archbishop Hurley—follow a thorough academic regime but also have time to practise music eight hours a day. The results are evident and were recognised by the gold medals they won at the recent World Choir Games.

With all the problems of funding a start-up project like this, John Tungay might have reason to despair. But the music his girls create is an endless source of hope for him and for all who hear them.

A god-daughter of mine recently confessed to me that she had left her choir because, with so much misery in the world, she felt she could not sing. I told her that this was exactly the time to start singing.

Despair and death do your worst: the Drakondale Girls will confound you!