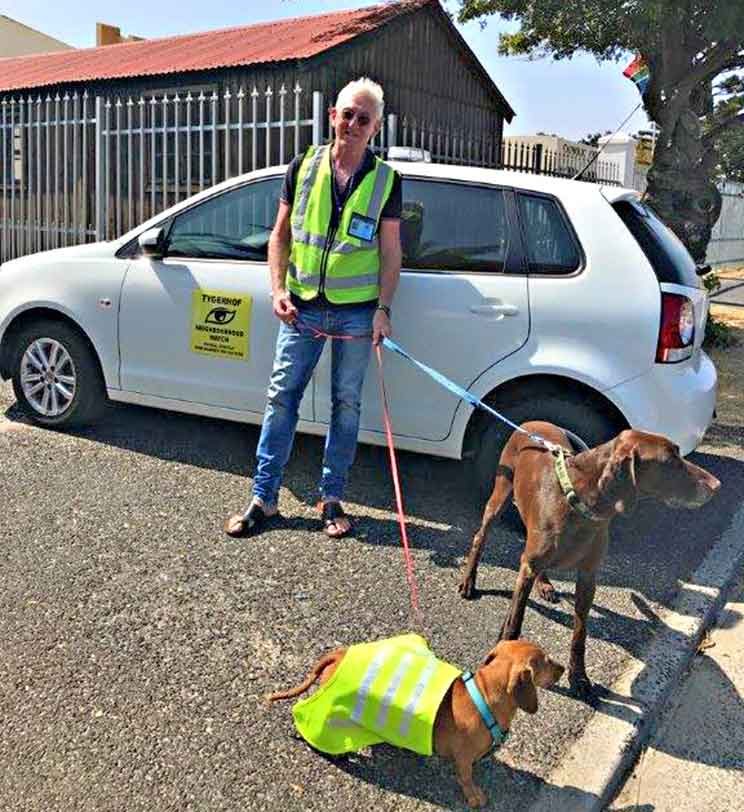 Fr Stan Botha of the Cape Town parish of Brooklyn/Milnerton and his dogs Donovan and Sipho are seen before going on patrol for the local Neighbourhood Watch.

Two priests who go on regular patrol for their local Neighbourhood Watches are encouraging other priests to take part in such activities to fight crime and as a way of connecting with people of all walks of life.

Fr Stan Botha of Milnerton/Brooklyn, Cape Town, and Fr Stefan Hippler, chairman of HOPE Cape Town, said that Neighbourhood Watch “is one of the most effective ways for neighbourhoods to reduce crime in their surrounding areas”.

“It  assists in protecting property, reducing car break-ins and house burglaries, and teaming up with police, other law enforcement and armed response companies means more peace of mind for those living in the area,” said Fr Botha.

“This should also concern the local parishes and their priests — being part of such initiatives is also a great way to connect to people of all walks of life,” he said.

Fr Botha, who moves constantly between his parish’s two presbyteries in Brooklyn and Milnerton, often begins his patrol at 4:00 with his dogs, Donovan and Sipho, a pointer and a dachshund respectively.

He feels strongly about community, whether Catholic or not, and has roved the neighbourhood with motivated Jews and the local Dutch Reformed dominee.

He said the scariest patrol he experienced was entering railway tunnels with other Neighbourhood Watch members in late afternoon.

“But people living there are often friendly, though we do find much of our stolen goods, too,” Fr Botha said.

Fr Hippler, a German fidei donum priest and founder of HOPE Cape Town, lives in the Blaauwberg neighbourhood of Parklands, and has also been a patroller for years.

In spite of his heavy schedule and frequent trips around the world for HOPE, he finds time to show by example that we can all do a little extra for our communities.

Both priests have been long-standing members of Rotary International and seek to encourage Christians to be involved in the broader community, especially with those most vulnerable.

“Being part of the solution for a peaceful and crime-free society is one way to do so,” said Fr Hippler.