What Church Has to Say about Sports 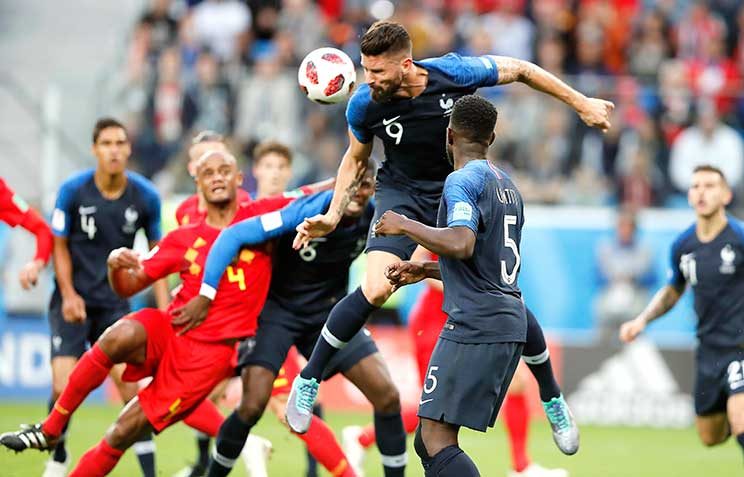 A scene from the World Cup semi-final between France and Belgium (in red) last year. (Photo: Antatoly Maltsev, EPA/CNS)

By Fr Pierre Goldie – In my first column I concluded that we have excluded Christ from many key areas of society — including politics, business, education, entertainment, sport, science and other areas — and so rendered him virtually irrelevant to everyday life, apart from the sick and poor.

Catholic Social Teaching (CST) is a method, as well as a body of teachings, which bring Scripture and Tradition into real life.

A milestone in CST literature was an encyclical letter by Pope Leo XIII in 1891, Rerum Novarum, which courageously spoke out on the harsh workplace conditions of the majority of workers and other negative aspects of the industrial revolution, as well as promoting their right to form unions.

These documents from the Vatican apply a See (social analysis), Judge (judgment in the light of the Bible and Tradition) and Act (pronouncements, actions) methodology. This is a form of evangelisation, of bringing Jesus into all compartments of life.

Because sport is such as popular phenomenon, and because many readers will be surprised that the Church has something to say about sport, I look at the Church’s response to this topic.

The Vatican Congregation for Culture has a Department of Culture and Sport, to which many of the following observations are credited.

Their social analysis identifies sport as a mass phenomenon which mobilises hundreds of millions (and even billions on the day of the World Cup football final). It arouses very strong passions, even violence on the field and off the field (such as soccer hooliganism).

Sport is a great cultural aspiration of the world. It should not be condemned as degenerate (but what of contact fighting?). To understand sport is to enter into its world and enable us to evangelise this area of human activity.

Sport can unite families who assemble to play, to enjoy sporting competition. Pope Francis has expressed his love for football. The intention is to recreate, to go beyond ourselves, to forget for a while the worries of life, to relax, and to grow via good-natured competition and respect for rules.

Social analysis, however, also unearths many problematic concerns. There are those who use performance-enhancing drugs. There is match fixing, cheating, even violence on the field. Cricket appears to accept “sledging” as a normal part of the game. Parents push children to extreme lengths for the glory of a medal. Some push themselves to extremes, motivated by greed for glory and money.

One sports fanatic announced on a radio programme that his favourite football team meant more to him than his family, girlfriend, work, church, and child!

We can “Judge”, as we immediately think of false idols, and of Jesus who asks us to put God before all things (as in Luke 14:26).

In Hebrews 1:3 we read that the Word (Christ) sustains all things in existence, so we owe our very physicality to Christ, and most sport involves our human bodies.

One Cape Town parish has a very popular Sunday evening Mass, where there is often standing room only. But one evening, as the priest and the rest processed into the church, Father stopped, and looked in surprise at the half-empty church. The men’s Wimbledon final had gone into overtime. Many chose tennis over God, who wants to cast his loving gaze on us!

I invite readers to reflect on sport, and to find appropriate Bible passages that bear relevance to sport.

The first Vatican document on sport is entitled “Giving the Best of Yourself”, issued in 2018 by the Dicastery for Laity, Family and Life, addressed to all people of goodwill. Access it at www.bit.ly/2tqJoqi