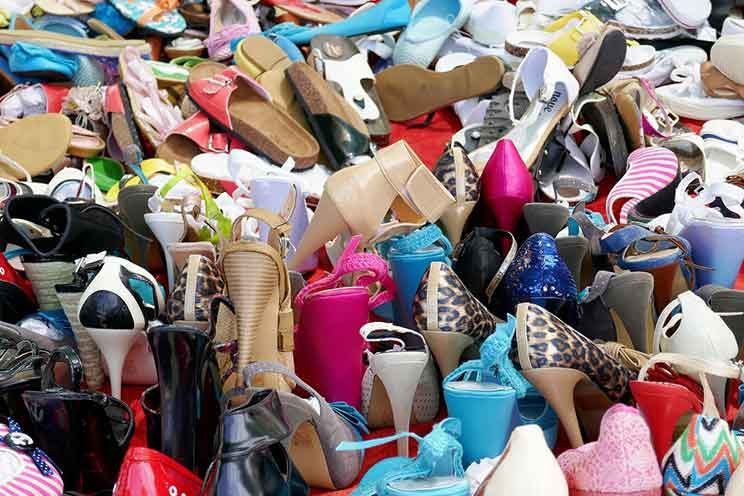 Lots of shoes which might be useful to some but would be useless to homeless. In his column, Raymond Perrier asks that we take more care in choosing what old items to donate. (Photo: Steven Watts)

The Lord reminds us it is better to give than to receive. During Lent, I am sure that most readers are focused on the value of giving. But as someone who runs an organisation that is often on the receiving end of people’s desire to give, I would like to offer some cautions.

A meme was running round Facebook the other day encouraging people to support a seeming act of Lenten self-sacrifice.

The idea is that for each of the 40 days of the season, you go through your cupboards and find some item of clothing or houseware or gadget that you do not want and set it aside. At the end of the 40 days, these can be “given to the poor”.

But hang on a minute. First of all, you are giving away something you don’t want — so not much self-sacrifice there. Secondly, you are doing it piece by piece — a sock today, a broken can-opener tomorrow—which is hardly an act of abundant generosity.

But most importantly the assumption is that all of the stuff you don’t want will be lapped up by the poor.

If you are in the middle of this act of Lenten devotion, may I ask you to pause and think about whether any of what you give is actually going to be useful to the poor for whom it is destined.

Have you given thought to what people need or have you asked one of the many organisations that caters for them? You might find that your sack of 40 “gifts” was better not to be given at all.

Let me give you a cautionary example. A well-meaning woman arrived at the Denis Hurley Centre in Durban recently and started carrying in items cleared out of her house to be donated for the homeless. Twenty boxes arrived.

I came out to thank her but also to check what was in the boxes. “Oh, this one has bed linen.” Good, I thought, blankets. But no, the box had duvet covers and pillows. Not exactly useful for someone who is sleeping on the streets, especially since they have to carry their belongings around with them all day.

“Thank you,” I patiently explained, “but since people are homeless, these items are really not that useful.”

The next two boxes contained curtains. Again, it’s not exactly what homeless people need on account of being, well, homeless. Then some boxes with old picture frames. I could see a pattern here…

In the end, 19 of the 20 boxes went back in the car. To be fair, the kind woman seemed to understand why.

It Costs to Get Rid of Things You Don’t Want

I  have no doubt that she had good intentions. She might have thought that she could give us everything and we could then get rid of what we did not want.

But it costs us time and fuel to get rid of things. A simple phone call would have saved her the R50 she wasted on fuel.

Often what is useless for us is also useless for other people, and we cannot make ourselves feel better about buying new clothes or new gadgets by dumping the obsolete ones on the poor.

And even when things are useful, they need to be targeted at the right organisation. Just because the Denis Hurley Centre does not need something does not mean that someone else might not have use for it. But that would require a donor having to ring different charities and churches to find various good homes, and that is a lot to ask.

In some cities, there are organisations that act as a storehouse for items to distribute to other organisations who will need them. They collect what people do not want — specialising in clothes, or furniture or toys—and then are known to be a collection point for individuals and organisations that need those same things.

It is something that around the world the Society of St Vincent de Paul has done with great success, though I do not know if they do it in many parts of South Africa.

The Dutch Reformed Church organises every year in June a national campaign called “Winterhoop” in which churches are drop-off points for donated goods. These items — foods, blankets,  clothes and so on— are sorted and stored so that organisations in the area can collect what they need for their outreach.

It takes hard work and you need a place to store things, people to sort items, and often a vehicle to collect. And it also takes the strength to say no to people who are just using you as a free disposal service.

In the age of technology, there are on-line versions of the same principle. Free-cycle.org is a great website where, around the world, people in an area can offer things for free and other people in the same area can find things for free — provided they are willing to collect.

It is noticeable though that there are very few groups in South Africa, perhaps because the people who need free stuff generally do not have the access to the transportation needed to collect what is on offer.

Another solution to this is for charities to be specific about what they need — and for donors to listen to what is being asked for. We now do this at the Denis Hurley Centre with second-hand clothes.

We never make a general appeal for clothes since 95% of what we receive is of no use to us. It is mostly women’s clothes, whereas 80% of the people we see are men; and the men’s clothes we get are larger sizes (from well-fed middle class donors). But we need smaller men’s clothes since homeless men tend to be quite thin.

So we now make our clothing appeals specifically at boys high schools since teenage boys are generally the waist size of the men we are helping.

We are also hoping to revive a larger-scale project in Durban so that all kinds of clothes can be collected and then passed on to the different organisations that really do need them.

So if you are planning to give away things this Lent, please don’t stop. But do pause and consider whether they are really useful, who they might be of use to, and make sure you ask the organisations who know best what can be used.

Or take the stuff nobody can use to your local charity shop. Who knows: somebody might have use for it.

It is better to give than to receive. But it is best to ask first!