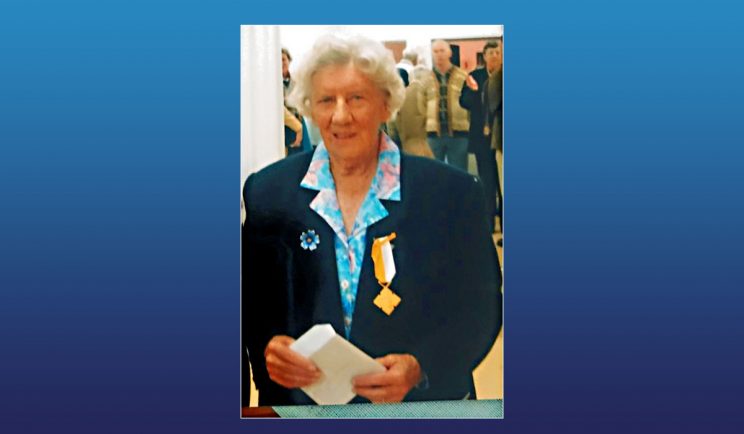 Born in 1920 in Pietermaritzburg, she was a boarder at Holy Cross Convent School in Aliwal North. After matriculating she studied both accountancy and music.

Her trained voice graced church choirs throughout her life, starting with Kerk Street cathedral in Johannesburg.

She played hockey for Oblates and worked as an accountant at Sun Insurance, where she met her husband of 46 years, Noel Williamson.

When the Holy Cross Sisters opened a school in Victory Park in 1954, the Williamsons relocated so that their children could attend. Mrs Williamson served as school secretary to Sr St James, and her sons attended nearby De la Salle College.

She was a member of Victory Park parish when the iconic “lemon-squeezer” building was constructed, in the time of Frs Tom Kelly and Tony D’Alton.

In 1966 the family moved to Cape Town and she was a founding member of Constantia parish church. Her active service in the parish began under Fr Heinz-Werner Schneider and continued under Fr David Musgrave.

Here she was instrumental in the team organising the annual Constantia Fair, the major parish fundraiser, as well as day-to-day activities such as welcoming new members.

Her crowning achievement was establishing and running the Visitation Adult Education Centre for 15 years, which provided literacy and formal education for local domestic workers, gardeners and farm labourers. The project is still thriving today as CWESI, based at Wynberg Boys’ High, and has been recognised for excellence by the national Department of Education.

During her time in Cape Town she served for more than 20 years on the Southern Cross board.

She put her accountancy skills to good use, doing the books for Kolbe House student residence during Fr Brian Gaybba’s time as student chaplain.

In her later years she lived in Bergvliet and joined Holy Redeemer parish, attending daily Mass and singing in the choir.

Even after settling at nearby Anchusa Court old age home, she continued to transport other parishioners to Mass. In her last years, Mrs Williamson was driven to Holy Redeemer each week, and was a familiar sight in the front pew with her rosary, still singing every hymn by heart.

She leaves five children, six grandchildren, and one great-grandchild.