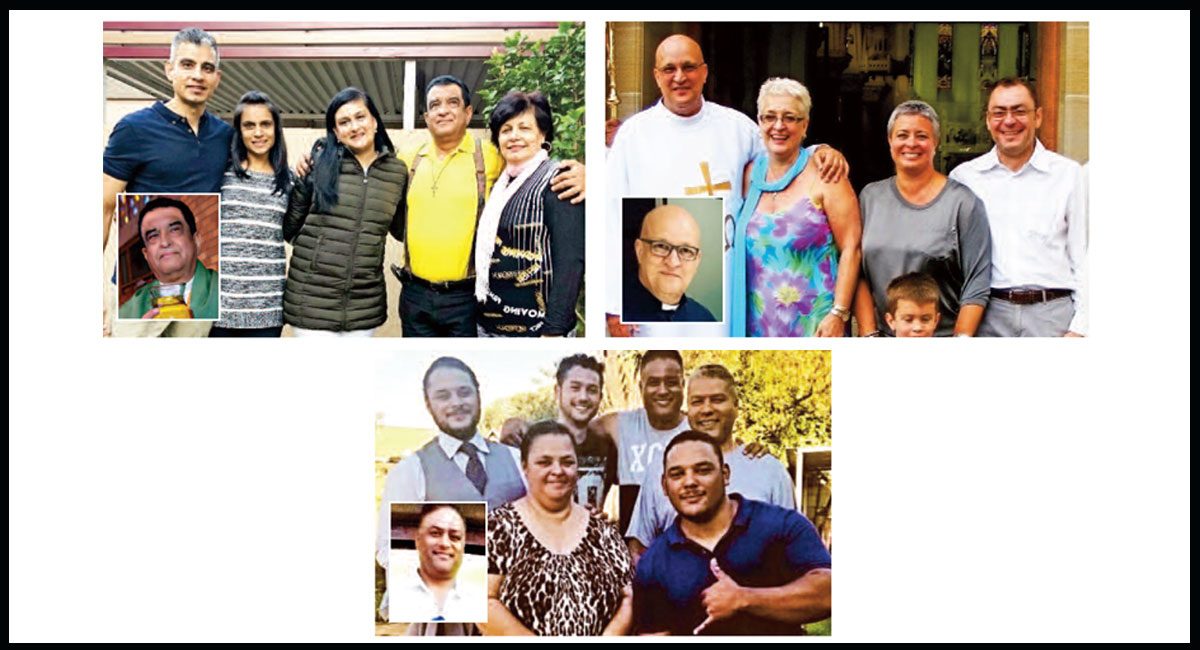 For many Catholics, the role of a deacon is still unclear. If deacons are not priests, is their vocation real? Erin Carelse asked three deacons what they are doing, and how their families support them while serving in their ministry.

In the hierarchy of the Catholic Church, you have the pope, then, cardinals, bishops, priests, and deacons. The word deacon comes from the Greek word diakonia meaning sservice or messenger.

There are two types of deacons.

Permanent deacons are men ordained to an office in the Church who have no possibility or desire to become priests. They can be single or married and most have secular jobs to support their families

Transitional deacons are seminarians, students in the last phase of training for the Catholic priesthood. After being a deacon for a year, they are ordained a priest by a bishop.

Many deacons experience a calling to the ministry. For Deacon Walter Middleton, of St Patrick’s parish in La Rochelle, Johannesburg, there was a calling by the Holy Spirit, which he felt in December of 1987.

“From the age of 14, I prayed that the good Lord would help me to do his will by reaching out to the poor and needy,” he told The Southern Cross.

My prayers were heard when on July 14, 1969, I got a job with CARE International, a humanitarian non-governmental organisation that did relief and development work in close to 100 countries around the world assisting those affected by war, drought, floods and famine.”

In 1988 he joined World Vision International, where again he was responsible for feeding the poor and the hungry around the world. It wasn’t until 2011 that he made a decision to become a deacon and enrolled with bible college.

Deacon Middleton, who retired in 2015 from World Vision International, has since then dedicated his time to doing God’s work in his parish. He has started feeding programmes for the poor and hungry—mostly children, and runs a sewing class for refugees, migrants and unemployed SA women. So far he has trained over 80 women in sewing.

With his wife of 40 years, June, he has two children.

His hobbies are riding his Harley Davidson motorbike, playing the saxophone and reading.

Deacon Greg Garnie, who serves at St Dominic’s parish in Boksburg and is on the board of deacons for Johannesburg, experienced God’s call to be a deacon when he was 31.

“Becoming a deacon was something I had never thought about nor did I aspire to be as I was quite content doing my bit for the Church, climbing the corporate ladder and excelling in achieving good financial results,” he recalled. “I discovered that God calls in one of two ways; either directly, as with St Paul on the road to Damascus, or indirectly as with St Mathias who was chosen by the Eleven to replace Judas Iscariot. In either case, the Holy Spirit of God intercedes to make God’s call known,” he said.

“I experienced a direct calling that left me in no doubt that my bell had been rung. Had I not had the unwavering support of my wife and sons, I would not have embarked on this mission.

Deacon Garnie has published a book, A Deacon’s Reflection, which defines who the Catholic permanent deacon is—his identity, role, and relationship. It is the first book to be written by a permanent deacon from Africa on this subject and sheds much-needed light on the clerical order. (See page 12)

He also has a job at the family manufacturing business which was founded several years ago. He and his wife Gail have been married for 32 years and have two sons.

For Deacon Des Eyden of Our Lady of Perpetual Help in Durbanville, Cape Town, there was a need and calling to do more in his faith.

“I had this void inside me, so I first joined the St Vincent De Paul Society, but that didn’t work out, so I became a member of the Knights of Da Gama which I still am today. But I still felt I was being called to something more, and that’s when the calling came to become a permanent deacon. It came through my wife Cilla after a weekend pilgrimage to Ngome,” he said.

Deacon Eyden and his wife have two sons and a daughter.

Functions of a deacon

The order of deacon has three essential functions: the proclamation of the Gospel, the service of the liturgy, and the administration of charitable works.

“Their mission is to bring Christ from the sanctuary to the everyday men and women in the community. They do this by taking Holy Communion to the sick and house-bound. They are involved in catechism and conduct RCIA classes. Deacons assist the parish priest on weekdays with communion services as well as  Benediction and memorial services for the deceased should the priest be unavailable.

They can administer the sacraments of baptism and marriage in the Church, proclaim the Gospel, give homilies when asked by the priest, purify the vessels after communion and dismiss the congregation at the conclusion of Mass,” Deacon Middleton said.

A deacon is also trained in counselling and prepares couples planning to get married. They run baptism preparation classes and assist the parish priest in administering blessings on homes, cars, and individuals.

Deacons, however, cannot consecrate the Eucharist or hear confessions. They cannot administer the sacraments of confirmation or anointing of the sick.

Outside of the liturgy, the role of  deacons varies, depending on the needs of the parish in which they serve. Most deacons are not paid for their service and volunteer their time out of love for God and the Church.

For the deacon, God is first, then family and then Church. Therefore, a deacon should be sure to spend quality time with his family and create a balance between his pastoral work and his family commitments.

When becoming a deacon, family support is vital. One cannot become a deacon unless there is support from the family, especially the wife as she needs to give her approval in writing that she has no objection to her husband becoming a deacon. Wives are welcomed should they wish to attend the academic training with their husbands.

Most permanent deacons are married and, as such, bring a special spirituality, life experience, and charism to enrich the liturgical and pastoral life of the community in which they serve.

Deacon Eyden’s family certainly supports him. “If they didn’t I would not be able to perform as a deacon. Deacons need to ensure that their ministry does not have an adverse effect on their family. This is something the deacon and his family need to seriously discuss prior to him applying to become a permanent deacon, especially if they have young children,” he said.

Deacon Garnie explains that a deacon must find a balance between the three principal centres of his 24/7 ministry—family life, work life, and community life.

Aspiring to the priesthood?

If allowed to, would they become priests?

Deacon Middleton answered: “As long as my wife is alive, I wouldn’t become a priest. However, if the Vatican were to allow married men to become priests, yes, I would consider the priesthood.”

Deacon Eyden never seriously thought about it. “It was definitely never my intention when I became a permanent deacon to want to be a priest. The ministry of the deacon is quite different from that of a priest.”

Deacon Garnie has been asked, at various times, by priests, laity and religious Sisters, if he would consider becoming a priest.

“The question only reinforces what I had already discovered in my diaconal journey; that we need to educate our priests, laity, religious and even our bishops and deacons, on the identity of the restored, original deacon.

Simply put, the restored, original deacon is not the same as the transitory deacon and should not be confused with a transitory deacon who is on his way to priesthood. If they were the same, Vatican II would have had no reason to restore that which already existed.”