CWD: Requiem for a Great Organisation 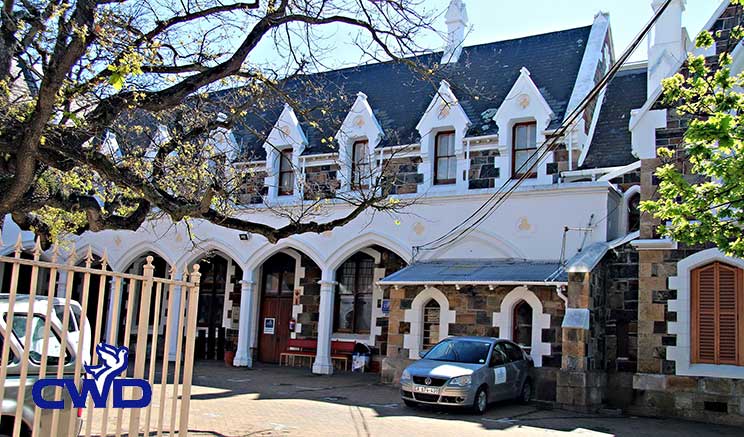 Once it was one of the great welfare organisations of the Southern African Church; in November it closed its doors. Over two articles, SYDNEY DUVAL looks at the growth and legacy of Catholic Welfare & Development, which was known to all as CWD.

In the Cape Town neighbourhood of Green Point, on the edge of the city centre, 37A Somerset Road is an iconic landmark of Catholic mission and service in Cape Town — and far beyond that.

The driveway leads up to the courtyard and great oak that floods summer green light on the stone building established by the Cabra Dominican Sisters in 1873 as their Sacred Heart convent and Sacred Heart School.

Berthed alongside 37A is Sacred Heart church and more stonework, also established in 1873. A squint across the road reveals the Salesian Institute, which has cared for youth since 1910.

Together they form a powerful memoir of Catholic life in Cape Town in pioneering times.

The Dominicans withdrew from the convent in 1965, but Sr Thomas Murphy and an assistant continued to serve the school from St Mary’s.

In the early 1970s the building was known as Cardijn House, a makeshift hostel intended to nurture the Young Christian Workers movement, inspired by Cardinal Joseph Cardijn and his “See, Judge, Act” method of implementing Catholic social teaching.

The Dominicans were gone by 1975 and the building became a facility of the archdiocese of Cape Town, with Fr Roger Hickley the next tenant. Together with Sam Gross he opened the Haven Night Shelter at the prompting of Peter and Anne Templeton, social workers with the National Institute for the Prevention of Crime (Nicro).

The Templetons had opened the Night Shelter in Harrington Street some years earlier. Peter was to be a major force in the development and influence of Catholic Welfare & Development (CWD) in the succeeding decades.

By the year 2000 CWD had become a multi-faceted organisation supporting more than 20 development programmes, enabling the local Church to touch the lives of thousands of needy people in communities from Elsies River to Khayelitsha, from Paarl to Atlantis.

CWD also influenced the work of the Church in many areas beyond Cape Town, such as the Northern Cape, the Karoo and Eastern Cape.

You did not hear the anvil and bellows, but CWD had become an empowering forge where scrap metal from the past, old ideas and approaches, were hammered into new shapes as a practical response to the rising tide of poverty, unemployment and shacks forming around Cape Town.

As an active response to “Call to Conscience”, CWD also helped make the Pastoral Plan, to be a community serving humanity, a lived reality known to all the major Catholic donors from Misereor to Missio, from Broederlijk Delen to Caritas. From 37A on Somerset Road, a host of Good Samaritans went out to struggling families and communities to bring humanity to humanity.

After nearly 50 years of bountiful service to the distressed of the world, CWD was closed in controversial circumstances in November last year, ending a story of compassion and outreach that began on February 2, 1970.

On that day Schoenstatt Sister Elizabeth Meyer and Muriel Howell, tutors in social work at the University of Cape Town, went into St Mary’s cathedral to pray that the Catholic welfare service they planned to start would take root and grow.

“It was the cruellest time of apartheid, when race laws were forcing people from their homes to the Cape Flats and black people got pitiful pensions,” recalls Ms Howell.

“Our dream was of a bold welfare agency offering specialist and professional services to the community. We did not want a wishy-washy organisation, but a service that would make a real impact on the poor and needy.”

The quality of work that developed under Peter Templeton was evidence of how well their prayers were answered.

The Catholic Family Welfare Council worked from two rooms in the archdiocesan chancery, with the blessing of Cardinal Owen McCann, who then was the archbishop of Cape Town.

The chairman, Mgr Tom Gill, promptly changed the name of the fledgling organisation to Catholic Welfare Bureau. He had an aversion to the words “council”, “association” and “society”.

Fr Mike Hulgraine, who was much concerned with the poor living on the Cape Flats, opened his Mowbray presbytery to meetings.

Even then, fundraising was an important need. Every Catholic family was asked to give R1 a year! In addition, the Catholic Welfare Bureau was supported by many voluntary helpers, among them the indefatigable Mary Lack, who was the unofficial coordinator of a group of women who distributed soup to poor communities and food parcels to black pensioners.

Ms Lack was to become a beloved long-serving agent for Catholic social outreach, which Queen Elizabeth II recognised in awarding her the MBE on December 31, 2005.

A response to apartheid

Political unrest was a major factor in the 1970s, following the destruction of District Six and the forced removal of its people. The politics and injustices of the day demanded an organised, decisive response.

A group of four Catholic social workers at Nicro, Peter and Anne Templeton, Sr Marie McLoughlin SND and Fr Mick Crowley MSC, believed that the Church should play a much more active role in providing relief for those affected by social injustices, political crises and poverty.

Peter and Anne Templeton wrote a proposal for Bishop Stephen Naidoo, then auxiliary to Cardinal McCann, suggesting how the Church could better coordinate its welfare services to respond more effectively to people in need.

The decade ended on October 1, 1979, with the appointment of Peter Templeton as the new coordinator.

In early 1980 he moved into larger offices at 37A Somerset Road with Muriel Howell as social worker, Fr Mick Crowley as chairman, and Sheila Heilbuth as a part-time secretary.

At that time, there were eight soup kitchens, a food parcel scheme for black pensioners and Ms Lack’s yellow kombi for transport.

Sr Marie launched the Cape Credit Union League. Then came neighbourhood homes for the aged based on the British Abbeyfield concept, and a cooperative handspinning and knitting project aimed at providing employment for people with various disabilities.

The food gardening project, Abalimi Bezekhaya, was set up in Gugulethu and Khayelitsha. Dave Golding gave vision and substance to this pioneering, award-winning effort.

Zelda Groener started the first pre-school, at Elsies River. She encouraged the involvement of a local mother, initiating a conscious move by the agency towards community members being trained to do the work.

Sandy Dowling used her visionary spirit to organise CWD’s outreach to Ocean View and Masiphumelele while Rebecca Davids did the same in Atlantis.

Sr Carmel Bennett FMM brought Australian flair to CWD. She saw the importance of not only training others but also of developing and training CWD’s own staff. She also strengthened the agency through sound internal structures and systems.

People’s Dialogue was a small in-house land and housing project which got initial impetus from Philip Greathead’s sandbag building method.

Mother Teresa housed her first group of Sisters in South Africa in a sandbag house in Z Section, Khayelitsha, where we shared a celebratory meal of curry and rice.

Mr Bolnick got people to think differently about housing. He linked it to social solidarity—to the idea that the product is not as important as the process, to awakening the homeless to their own potential power to overcome adversity.

Breadline Africa was another CWD brainwave. This fundraising partnership was shaped by Peter Templeton building on long-serving board member Francis Greathead’s connections to influential family, friends and professionals from Catholic circles in England.

One of the young men who had grown with the agency was Gerschwin Kohler who became senior project consultor, enriching co-workers with his skilled interpretation of the concepts and movements influencing situations beneath the surface.

Fr Desmond Curran, who himself operated from a converted freight container, brought the distressing realities of life in Khayelitsha right into the agency during the time he served on the management board.

He was directly responsible for getting the agency to improve its constitution, with the help of Jock McConnachie, a long-serving board member who was generous in sharing his legal expertise with the agency.

These are just some of the people who with dedication and innovation helped establish a welfare organisation whose work had an influence well beyond the boundaries of the archdiocese of Cape Town.

Sydney Duval is a veteran journalist and retired personal assistant to the late Archbishops Stephen Naidoo and Lawrence Henry. He served on the board of CWD for 27 years, including terms as chairperson. Next week he will recall CWD’s work at the height of the struggle in the 1980s and its pioneering role in responding to the Aids pandemic.