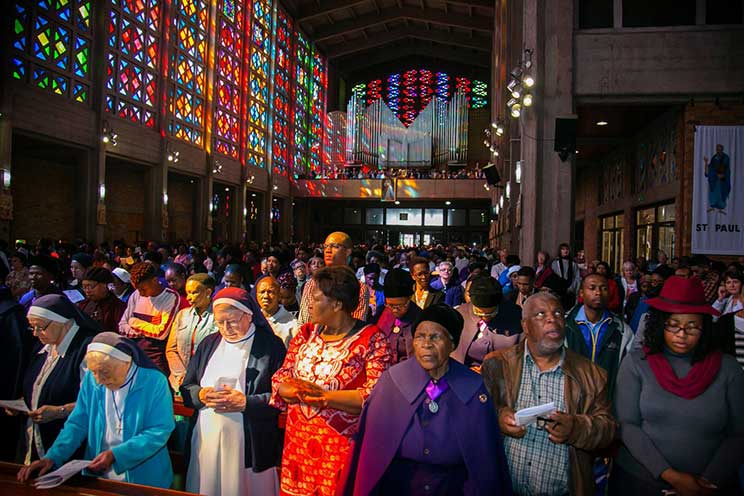 The faithful at Mass in Johannesburg’s Christ the King cathedral. The teaching of the “consensus of the faithful” has guided the Church throughout its history. (Photo: Sheldon Reddiar)

In his final of three articles on the Nicene Creed, MICHAEL MAYER looks at how the laity fit into the Church.

In our earlier articles we started off looking at “the dignity and role of the baptised”–but to what end? We also covered obedience — again to what end? I hope this week’s article will answer those questions.

Bl John Henry Newman — whom we have regularly encountered in these articles — made a startling set of observations on the role of the laity at the time of the Arian controversies of the 4th century AD.

His reflections came together in a groundbreaking article, published in The Rambler in July 1859, titled “On Consulting the Faithful in Matters of Doctrine”.

Newman found that where the majority of bishops had failed, the majority of the laity had not. He found that it was the laity’s support of Athanasius and other defenders of the Nicene Creed that had secured the faith and ensured that Arianism was eventually defeated.

“It was the Christian people, who, under Providence, were the ecclesiastical strength” of St Athanasius, the great defender of the orthodox belief, that Jesus is divine,” Newman said.

“The Nicene dogma was maintained [during the 4th century] by the consensus fidelium — the ‘consensus of the faithful’,” he wrote.

The role of the laity was identified by St Athanasius in the 4th century, rediscovered by Newman in the 19th century (appraising the writings of the early Church, in particular Athanasius), and established and expanded on at the Second Vatican Council in the 20th century (see particularly the Dogmatic Constitution on the Church, Lumen Gentium, and the Decree on the Apostolate of the Laity, Apostolicam Actuositatem).

There is still much work needed in investigating the role the laity has played in the Church over the centuries — locally, regionally, and universally.

We could easily fall into a trap of exaggerating the role of the laity. In the Church today there are numerous groups with strong and particular views on what they believe the Church should be, should be saying, or should be doing. Generally we all believe we are defending the cause of God, doing these things for Christ.

As Newman noted and cautioned in 1851: “In all times the laity have been the measure of the Catholic spirit; they saved the Irish Church three centuries ago and they betrayed the Church in England.”

We should always honour our primary responsibility: to further unity in the Church and not division — “that they may be one, even as we are one” (Jn 17:11).

Sojourning back to Athanasius can serve to enlighten us on unity and humility, placing Jesus first and not ourselves.

As we saw last week, Emperor Constantius II, who favoured Arianism, influenced the councils of Ariminum (Western Church) and Seleucia (Eastern Church) of 359. These councils, with the emperor’s support, universally suppressed the Nicene Creed, and introduced the Arian creed across the known world.

Under Constantius II, the Arians banished the pro-Nicene bishops and priests. Banishment often also included severe physical suffering: chains, torture, and even death for the clergy.

After Constantius II, Emperor Julian came into power (361-363). Julian, a pagan, cared neither for Arianism nor for the pro-Nicene Church. Julian wanted to return the Roman Empire to paganism.

He decreed that the orthodox clergy banished by the Arians be allowed to return, in the hope that the ensuing conflict between Arians and orthodox would tear the Church apart and weaken her.

Athanasius had been “excommunicated” and exiled by Arian influence in 353, but he too was also allowed to return to his see as bishop in Alexandria, Egypt.

During this rather short interval of peace for Athanasius (he would soon be exiled again), a council was held at Alexandria in 362 by the returning orthodox bishops.

Besides doctrinal matters, agreement was also reached on how to manage Arian bishops.

Instead of following the norm of vengeance, of deposing bishops and priests — which many pro-Nicene bishops wanted to do — Athanasius persuaded the council for the inclusion and correction of the errors of repenting Arian bishops (except Arian bishops who persisted in the heresy; those were to be deposed but allowed into lay communion after penance).

Arianised clergy needed to agree to and sign a confession of the Nicene Creed.

Athanasius’ recommendation led to unity and healing in the local Church. Wherever this was followed, the Church furthered peace and grew in unity and strength.

In the far eastern empire (Antioch and surrounds) where this approach was not taken, there followed decades of separation, schisms, conflicts, confusion and suffering.

The doctrinal and unifying efforts of the important Alexandrian council of 362 prepared the way for the Ecumenical Council of Constantinople (381) which reaffirmed and reestablished the Nicene Creed.

The Nicene Creed has been a bulwark of the Church, a sure and firm foundation of belief which even the Reformation could not disrupt. It is the benchmark of our belief in the Trinity and defines us as Christians.

Newman shared his desire for the role of the Catholic laity in 1851: “I want a laity, not arrogant, not rash in speech, not disputatious, but men who know their religion, who enter into it…who know their creed so well that they can give an account of it, who know so much of [Church] history that they can defend it.”

The bishops need to hear the voices of the laity to better guide the Church.

If lay Catholics fail to be involved in the Church, and to make themselves heard or to present their understanding, then the bishops miss a valuable and significant voice. This would diminish the great work of the Church, especially the local Church.

We, the lay faithful, would do well to read the writings of Vatican II, papal encyclicals, and the communications from the bishops’ conferences to remain abreast of current Church teaching and understanding of the role of the Christian in today’s world.

Our lay efforts, however, must always be in faithful obedience to Holy Mother Church. Obedience is demanded of the clergy — the laity are no less obligated.

The Church is the Body of Christ, “a community with diverse members with a common mind of faith”, according to the Austrian theologian Fr Hermann Geissler, “which cannot stray into error”.

The Second Vatican Council promulgated the doctrine of the consensus fidelium as Catholic teaching in Lumen Gentium (12):

“The whole body of the faithful who have anointing that comes from the Holy One (cf 1 Jn 2:20,27) cannot err in matters of belief.

“This characteristic is shown in the supernatural appreciation of the faith of the whole people…‘from the bishops to the last of the faithful’… they manifest a universal consent in matters of faith and morals,” according to Lumen Gentium (my emphasis).

“Aroused and sustained by the Spirit of truth, the People of God, guided by the sacred teaching authority (magisterium), and obeying it, receives not the mere word of men, but truly the word of God (cf. 1 Thes 2:13)

“The People unfailingly adheres to this faith, penetrates it more deeply with right judgment, and applies it more fully in daily life,” Lumen Gentium says.

We do well to pray it as a cry from the heart in unity with the Holy Spirit.

“Go therefore and make disciples of all nations, baptising them in the name of the Father and of the Son and of the Holy Spirit, teaching them to observe all that I have commanded you; and behold, I am with you always, to the close of the age” (Mt 28:20).

Part 1: What We Catholics Believe and Why