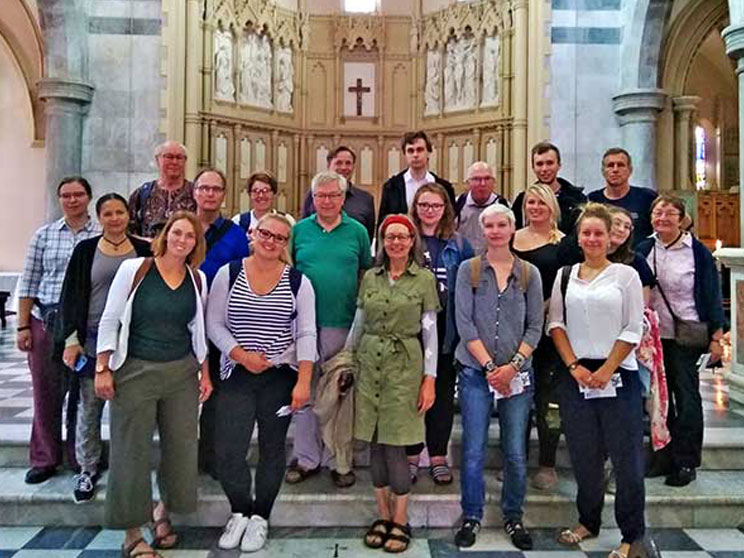 Lutheran teachers and trainee pastors from Rostock in Northern Germany were one group who recently were given a tour of Emmanuel cathedral. They were especially moved to hear about the way Cardinal Wilfrid Napier had hosted a service at the cathedral in 2017 to mark the 500th anniversary of the start of the Lutheran Reformation.

When he announced the convening of the Second Vatican Council, Pope John XXIII proclaimed that he wanted “to open the windows and doors of the Church so that we can look out and others can look in”.

Vatican II theologian Fr Jim Corkery SJ, who delivered the Winter Living Theology lectures in 2011, confessed that his mother’s response was: “And all the flies will come in as well!”

While we may laugh at that line, it betrays an underlying fear that many of us have as Catholics: when we open our windows and doors unexpected things happen. That is true metaphorically but also literally.

It is not so much the flies that worry us but rather the odd kinds of people who might wander into our churches. After all they might not be like us. They might not be the same skin colour or nationality or class. They might force us to change some of the ways in which we worship or socialise or run our institutions.

For example, some of the people who come might have different physical needs from the majority.

In large cities, where there are multiple parishes, at least one church is often highlighted as deaf-friendly and a signed Mass is hosted once a week. There may be a small cost in that—probably less than we spend on flowers—but the effect is to draw Catholic (and non-Catholic) deaf people into a welcoming and accessible place of worship.

The changes required to how the Mass runs are minimal and most hearing parishioners actually enjoy watching sign language. But to do so requires us to think about how we make our churches open to all.

I was shocked to discover that Durban has no such facility—and when I asked a senior churchman his reply was: “There is no need to provide that because we don’t have many deaf people coming to Mass.” I wonder why not…

Since being in South Africa I have watched with admiration how some parishes—which had once been very monocultural and monochromatic—have learnt to develop to become welcoming of all who want to worship in that sacred space. And I have winced in horror at ones that have not.

Of course, opening the windows and doors also means that even some non-Catholics might come in to our services: people who do not know when to stand and when to kneel, who don’t know all the answers to the prayers off by heart, who might even have little understanding of Christianity or of Catholicism.

That requires those of us “in the know” to be just a bit less knowing. We need to learn how to share what is precious and instinctive to us with people who are on a different part of the journey, and to do so in a way which is neither patronising nor exclusionary.

And what about those who wander in when it suits them rather than when it suits us? That requires us to think about what our church buildings are for.

Are they sacred temples into which only the initiates may enter at the prescribed times? Or are they places of encounter with God and with God’s mystical presence, where the Spirit blows freely?

I’m very impressed that Emmanuel cathedral in central Durban—not one of the safest places in the country—is open every day from 6am to 6pm, so anyone who wants to can come in and pray. And I have often seen people who are clearly Muslim coming in to find a quiet place to sit and be with God.

Cathedrals and city-centre churches in particular provide a fantastic opportunity for us to provide a “ministry of presence”: to offer a sacred and quiet space for people to find God (and not just those who are already part of that parish).

But the role of these buildings can stretch even further and provide a unique outreach opportunity: a chance to share our faith with people who perhaps do not even know what they are looking for.

At the Denis Hurley Centre, which I serve as its director, we have regular groups of 16/17-year-olds coming to volunteer.

They visit the mosque where they hear about Islam and can overcome some of the prejudices they receive from international media about Muslims. And we also take them on a tour of the cathedral.

I am struck at how many middle-class children have gone on trips to the other side of the world to visit grand churches but have never travelled the few kilometres to the centre of their own city to find a similarly impressive cathedral. This is a chance for them to learn something about history, about architecture, about art and, of course, about our religion.

But sadly, some people have questioned these tours. A group of teenagers, no matter how well briefed, inevitably bring with them noise and disruption. I appreciate that the person quietly saying her rosary would prefer not to be disturbed. But I hope that part of her prayer is that others will want to share in her faith.

Faith (and our church traditions) are not delicate jewels to be protected and hidden away—they are robust expressions of the presence of God in the world that we should willingly share with others.

so, I don’t feel that I’m giving a lecture but that I am evangelising (sharing the Good News) and catechising (providing information about the faith).

Evangelising and catechising are both disruptive activities—we hope they disrupt the lives of those with whom we are sharing the faith, but we have to allow that they will disrupt our own peace and quiet as well.

That is the underlying challenge of our faith. Are we creating a club of the saved, devoutly waiting for heaven? Or are we open to be an unpredictable association of random sons and daughters of God sharing our journeys back to the Creator.

A glance at the Gospels will show what Jesus thought of those who tried to promote the former model; and how he invested his time in the latter one.

It is full of risk and uncertainty. And that is why it is called faith.

n Read past columns by Raymond Perrier at www.scross.co.za/category/perspectives/raymond-perrier/