Buckets of Love to be Filled Again! 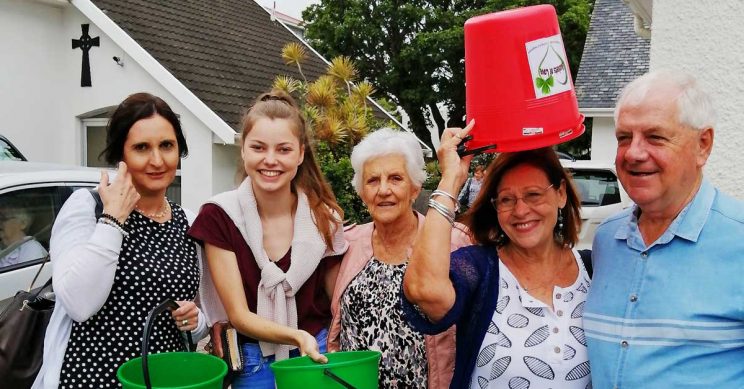 Catholic Welfare and Development (CWD) will continue its annual “Buckets of Love” campaign this year, despite not being operational and in the process of closure — and an East London parish has picked up the concept again to serve the poor in its area.

Archbishop Stephen Brislin of Cape Town has assured that the appeal is genuine, and commended it.

CWD currently has a skeleton staff of three people who are dealing with a small but important number of outstanding legal and financial matters, which are taking longer than anticipated.

The remaining staff and volunteers, under the oversight of the archdiocese of Cape Town, will run the campaign.

CWD had been running Buckets of Love for the past 22 years.

The objective of the campaign is to raise funds to distribute a bucket filled with enough food to feed a family of four for one week and provide much-needed practical food items to those who otherwise would find them difficult to afford. Each donation of R250 funds one bucket for a family.

Last year a total of 4606 buckets were filled by retrenched CWD staff and volunteers. The goal this year is to exceed 5000.

“We thought last year would be the final year the CWD would run the campaign but — since it is possible to do so again this year — we should use the opportunity to reach out to those in need to make this Christmas more special for them, “ Archbishop Brislin said.

He assured the public that all funds raised will be used to buy food for the campaign and not for any other purpose.

The buckets will be packed by volunteers at the Lawrence Road offices in Athlone early in December and distributed shortly thereafter.

Buckets of Love will survive. In future, the campaign will be adopted by a successor charity organisation.

The Buckets of Love campaign has also been introduced at St Patrick’s church in East London. It will be running the campaign for the third time this year.

Parishioner Janet Johnson introduced the parish to the campaign.

Last year St Patrick’s handed out 40 buckets to needy parishioners and members of the community. Their aim this year is to reach at least 60.

To contribute to CWD’s Buckets of Love, deposits can be made into Standard Bank account “CWD Grapevine”, number 070868913, Thibault Square Branch (020909).