Why was Jesus crucified? What events led up to Christ’s Passion? Over the next five days, Günther Simmermacher will examine the events and their context, starting with the raising of Lazarus. 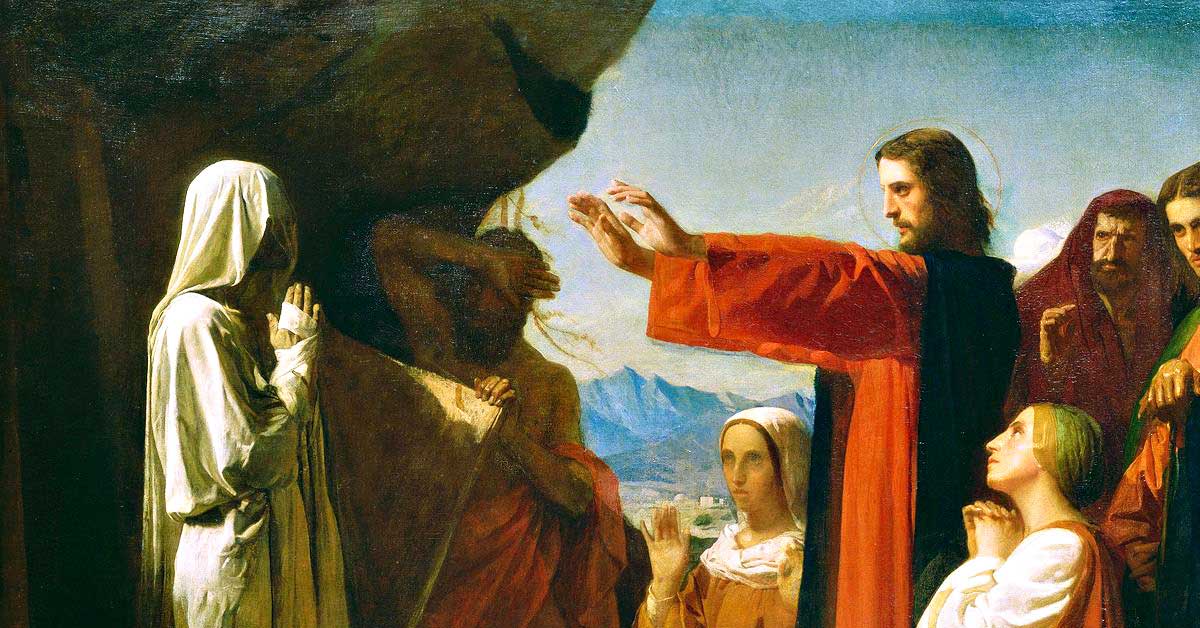 The act of bringing the rotting corpse of Lazarus back to life proved to many that Jesus was the Messiah—but it also gave his enemies the resolve to kill him. We join Jesus a few weeks before the Passover in the desert at the River Jordan, where his cousin John had baptised him a few years earlier.

That site is usually called Bethany-Beyond-the-Jordan. Today there are baptismal sites on both banks of the Jordan: one in the Kingdom of Jordan, the other in the occupied West Bank.

On the western bank, the site is called Qasr el Yahud.

The name means “the Gate of the Jews”, as this is where tradition places the location at which the Jews of the Exodus crossed into the Promised Land.

The symbolism of John baptising the Redeemer at that particular place is difficult to miss. It probably also was a spot of some traffic, enabling John to attract crowds.

Now we find Jesus and his companions in this area, near the oasis town of Jericho.

It is possible that Jesus has spent the winter in the area, where John’s Gospel places him after the last visit to Jerusalem for the feast of the Dedication (or Hanukkah).

That visit to Jerusalem was frightening. Jesus had narrowly avoided arrest and stoning for “blasphemy”, a foreshadowing of the terrible events ahead.

Presently, messengers arrive to inform Jesus that his dear friend Lazarus (or, in Hebrew, Eleazer) of Bethany, the brother of Mary and Martha, is mortally ill.

But Jesus doesn’t rush to Bethany — about 25km away, on the eastern side of the Mount of Olives — to heal his friend. Instead he cryptically says: “This sickness will not end in death, but it is for God’s glory so that through it the Son of God may be glorified.”

We may assume that his disciples wonder what this could mean, and then shelve the statement among all the other inscrutable things the Master has said, and continue to go about their business.

After two days, Jesus gets ready to go to Bethany, despite the misgivings of the disciples. They ask: “Rabbi, it is not long since the Jews were trying to stone you; are you going back there again?”

This generates another cryptic response, and they go on their way across the desert to Bethany — expecting the worst. Still, Thomas is resolute: “Let us also go to die with him.”

Bethany today is a West Bank town with the Arab name of al-Azariya, which means “Place of Lazarus”. And as the convoy arrives here, Lazarus is already dead.

Jesus’ friends Mary and Martha are grieving not only for their brother but also for what they see as the abandonment of the man whom they had trusted would heal Lazarus.

At the tomb of Lazarus, Jesus weeps (John 11:35 is the shortest verse in the Bible). Then he instructs Mary to roll the stone away. Mary protests that the smell of decomposition will be horrid.

And here we need to hit the pause button to consider a couple of things.

Firstly, Lazarus seems to have been entombed in the way Jesus himself will soon be laid to rest: in a rock-cut tomb.

The corpse had been anointed with spices and oil and wrapped in cloth (or, if burial is done in a hurry, covered in a shroud), so that it wouldn’t smell too badly while mourners gathered in the tomb for the first few days.

The corpse would be left there for about a year, by which time the flesh would be desiccated.

The bare bones would then collected and placed in an ossuary, a chest made out of stone or wood.

That was the plan with Lazarus’ remains, as it was with those of Jesus. In both cases, there’d be a change of plan.

The second thing to remember as we stand outside the tomb of Lazarus (and later at that of Jesus), is how the Jews of the time saw the process of death.

They believed that after a person’s death, his or her soul would remain around the corpse for three days, after which decomposition became observable. This meant that, in theory, a life could be revived as long as its soul was still present.

So Jesus’ raising from the dead of the widow’s son in Nain or of Jairus’ daughter was spectacular, but it was regarded to be within the limits of the possible, since the deceased’s soul was still present.

But Lazarus has been dead for longer than three days. Decomposition has set in (Mary issues a warning about the stench) and his soul has departed.

There is no way that Lazarus can be brought to life again — all because Jesus was tardy in coming before the three days were up. That is why Mary and Martha reprimand Jesus.

Jesus, however, has a plan. Addressing his Father, he says: “I speak for the sake of all these who are standing around me, so that they may believe it was you who sent me.” Then he calls: “‘Lazarus, come out!”

And Lazarus comes out. 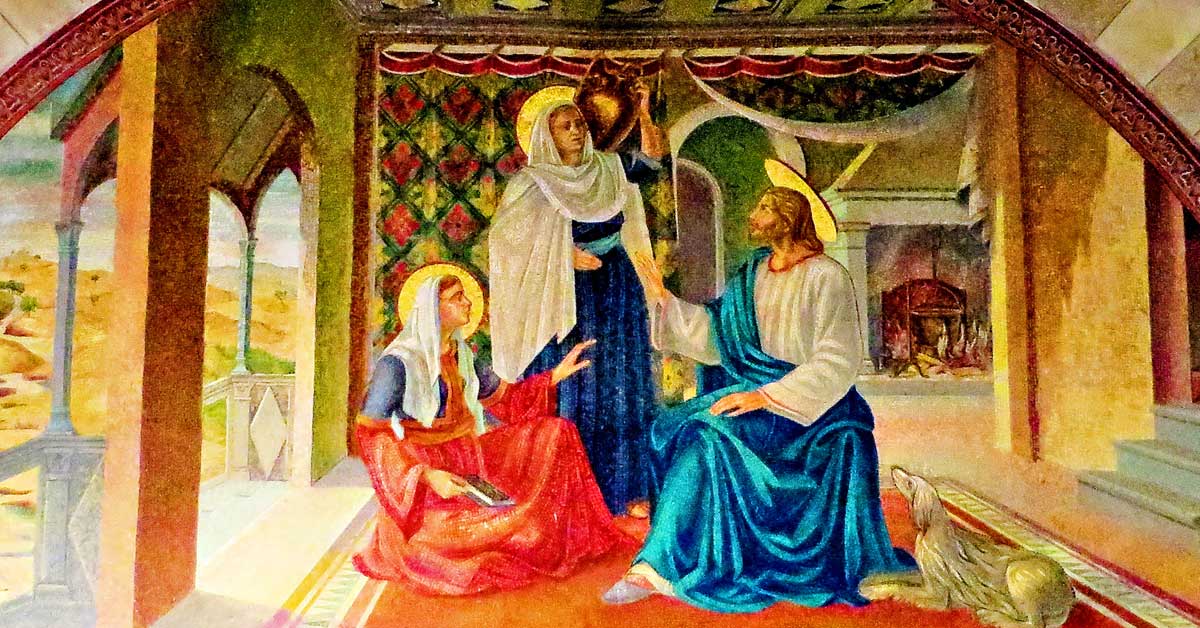 Jesus, Martha and Mary are depicted in the church of St Lazarus in Bethany, Palestine, which likely stands on the site of the house where Jesus often was a guest.

The Gospel leaves Lazarus there, his bandages being unwound (he briefly returns later, in the company of his sisters).

More important things are happening, for the people have seen something that goes against nature: the resurrection of a decomposing corpse.

In occupied Palestine at the time, religion and politics were inextricably linked, to the point that the various denominations were akin to political parties.

The major two parties were the Pharisees and the Sadducees.

The Pharisees believed in the omnipotence and intervention of God, in total free will, and in the resurrection of the righteous.

Of all the Jewish sects, it is the theology of the Pharisees — whose leaders so exasperated Our Lord that their name has become a byword for hypocrisy—with which Christianity has the most in common. And it is the Pharisaic theology from which the rabbinic Judaism of today evolved.

The Sadducees believed that God doesn’t intervene in life, that we have total free will, that the actions of that free will are neither rewarded nor punished by God, and that there is no afterlife.

It was the Sadducees who ruled the temple, with Caiaphas and his predecessor Annas as their leaders.

So as the religious authorities confer about the shocking events at Bethany, they are alarmed.

The Pharisees still seem a little puzzled about what all this means. Caiaphas — a shrewd religious and political leader — sees no upside.

“You do not seem to have grasped the situation at all,” he berates them. “You fail to see that it is to your advantage that one man should die for the people, rather than that the whole nation should perish” (Jn 11:49-50).

From that point on, Jesus’ fate is sealed. And he knows it. With his disciples, Jesus goes into hiding in the town of Ephraim, on the edge of the desert.

That town still exists, and it is a remarkable place. Now known as Taybeh — the town was renamed in the 12h century by the Muslim general Saladin — it is the only 100% Christian village in the Holy Land.

So this town, today in the occupied West Bank, is where Jesus hides out until he returns to the public eye in the most spectacular way the week before the Passover, on what we now call Palm Sunday.

But before he will embark on that entry into Jerusalem, Jesus returns to Bethany, where Mary, Martha and Lazarus are hosting a supper for him and his disciples.

Outside the house a crowd gathers, to see not only Jesus but also the subject of his miracle, Lazarus (who, according to John’s Gospel, is also a target for death by the religious authorities).

By now, Jesus is not just a rabbi with a knack for doing astonishing things. For many he is the Messiah who has defied every law of nature by having raised Lazarus from the stone-dead. 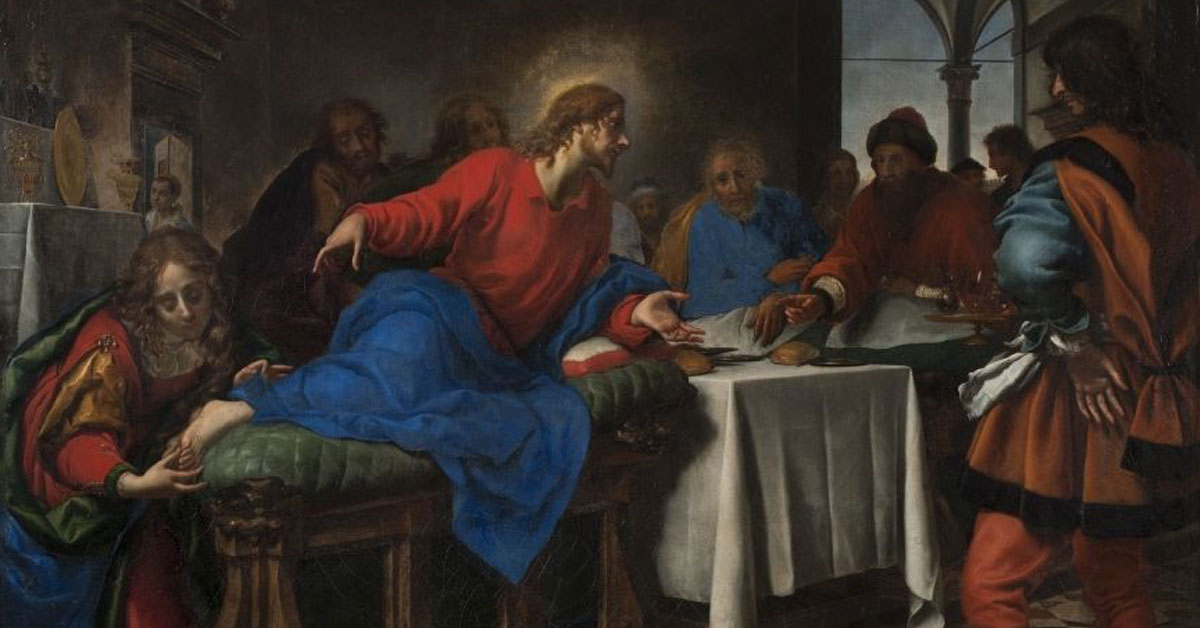 So when Mary uses her hair to anoint Jesus’ feet, with “a pound of very costly ointment, pure nard” (Jn 12:3), the message is clear: she is anointing the Messiah (the synoptic Gospels set the scene after the entry into Jerusalem, and at the house of Simon the Leper).

One guest is not impressed. Judas Iscariot, one of the two Zealots among the Twelve, protests: “Why was this ointment not sold for 300 denarii and the money given to the poor?”

Jesus tells him to let it be. John’s Gospel suggests that Judas, the group’s treasurer, is driven to his corrupt treason by greed, but the scholarly view looks at Judas as a revolutionary driven by political motivations.

In that view, Judas sees Jesus as the man whose kingdom will overthrow the hated Roman occupiers: a political Messiah doing Yahweh’s political work.

The Hebrew Scripture is replete with instances of Yahweh intervening in political affairs, so Judas’ expectation isn’t absurd (though it doesn’t reveal him to be the most attentive of listeners).

So to Judas, the whole religious Messiah business is getting in the way of liberation.

Maybe Judas hopes that getting arrested (but spared serious punishment) will move Jesus to some seditious fervour, or perhaps he is disillusioned by the revelation of Jesus as the King of not the worldly but another kingdom.

Whatever the case, it is probable that Mary’s anointing of Jesus as the Messiah is the most subversive act which Judas will report to the high priest, for that pathetic sack of silver.

What became of Lazarus?

We will reconnect with Jesus in the next article. But what became of Lazarus?

In the Gospel of John, we last encounter him at the supper in his house, with the threat of death (again!) hanging over him.

According to tradition, Lazarus later fled Judea and landed up in Cyprus, where he met Paul and Barnabas who appointed him bishop of Kition (now Larnaka).

He died for a second and final time 30 years after his resurrection (probably around 63 AD).

It is said that in those 30 years, he never smiled, remembering the sight of unredeemed souls he had seen during his first death.

Tomorrow: The entry into Jerusalem.
See the full series