A Passover Journey-through the Seattle Stations 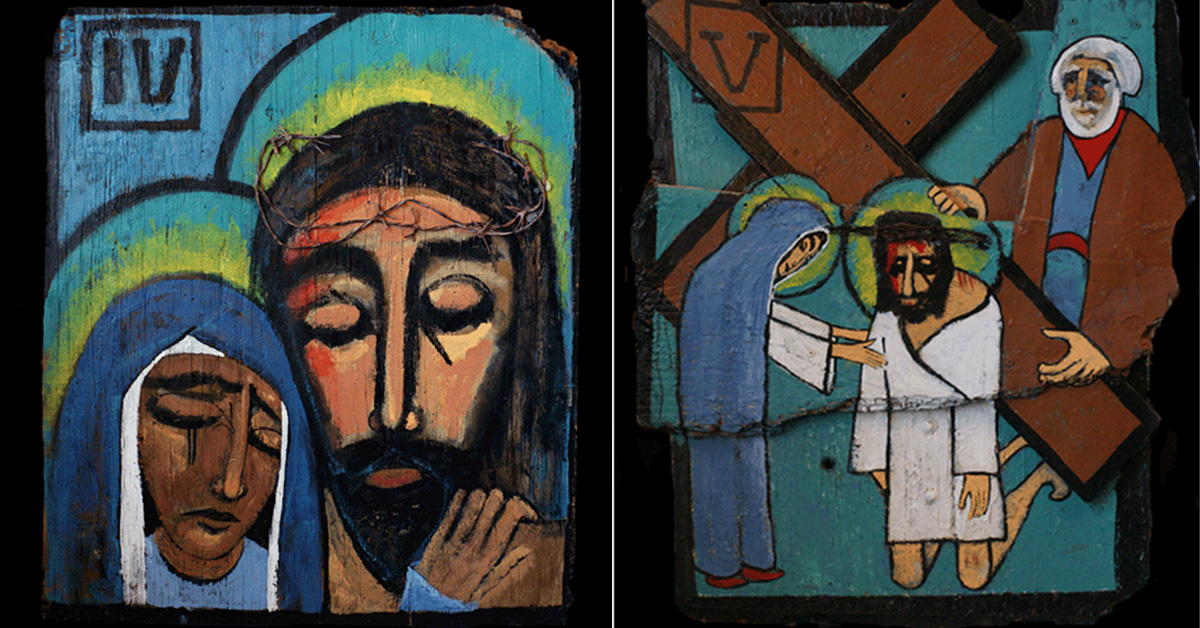 One of my pastimes on a holiday by the sea is to spend a couple of hours beachcombing. Depending on the location, it can be a rewarding experience. Walking the high tide line on an open beach you find the flotsam of discarded materials, washed from other distant shores or lost overboard from passing ships. Lengths of blue or orange nylon rope, water bottles and the occasional coloured plastic buoy, cut adrift from its moorings.

And then there is wood, splintered pieces worn smooth by the sea, bleached by the sun, floated to the shore through the swell of surf, waiting to be found. On one holiday in North Wales in 1979, I collected enough wood to fashion a complete set of tent pegs to replace the thin metal ones I was using. That night a huge storm arrived, wrecking the Fastnet yacht race in which 15 crew tragically lost their lives, but my new pegs held firm in spite of battering winds.

A good friend of mine in Seattle WA, recently drew my attention to another result of beachcombing, this time on the Pacific West Coast. Joan Brand-Landkamer, who is the iconographer at the cathedral of St James, collected driftwood to create a set of painted Stations of the Cross for the cathedral.  They are inspired by the work of the 20th-century French artist Georges  Rouault.

The Stations of the Cross are part of the iconography of a Catholic church. Usually they consist of small stone, plaster or wood bas-relief plaques, fourteen of them placed round the walls of the church. They tell the narrative of the arrest, trial and final journey that led to Golgotha and the crucifixion of Jesus of Nazareth.

The final Station, no 14, always depicted the burial of Jesus, final that was until the Liverpool artist Arthur Dooley was commissioned to create Stations for a church in Leyland near Preston in Lancashire. He added a further Station, the Resurrection.

He made his stations from welded scrap metal, raw and exposed. No gentle figures here in flowing clothes but the stark, gaunt reality of the mob, depicted face-on.

Sometimes we can get complacent with the traditional images of our faith. It is then that the jolt of the new can offer fresh and vivid detail to the story.

It is the same reality that the Seattle iconographer Joan Brand-Landkamer has captured in these painted, drift wood Stations. Space prohibits an account of every Station here, so I have selected a few images to reflect the story. The full sequence can be viewed at the St James Cathedral website with the text written by Paul Claudel, read by the cathedral pastor Fr Michael Ryan.

The Third Station tells the story of Christ falling the first time after being given his Cross to drag through the streets of Jerusalem. The figure, still crowned with the woven thorns is painted on part of a door, the metal hinges still clearly visible. 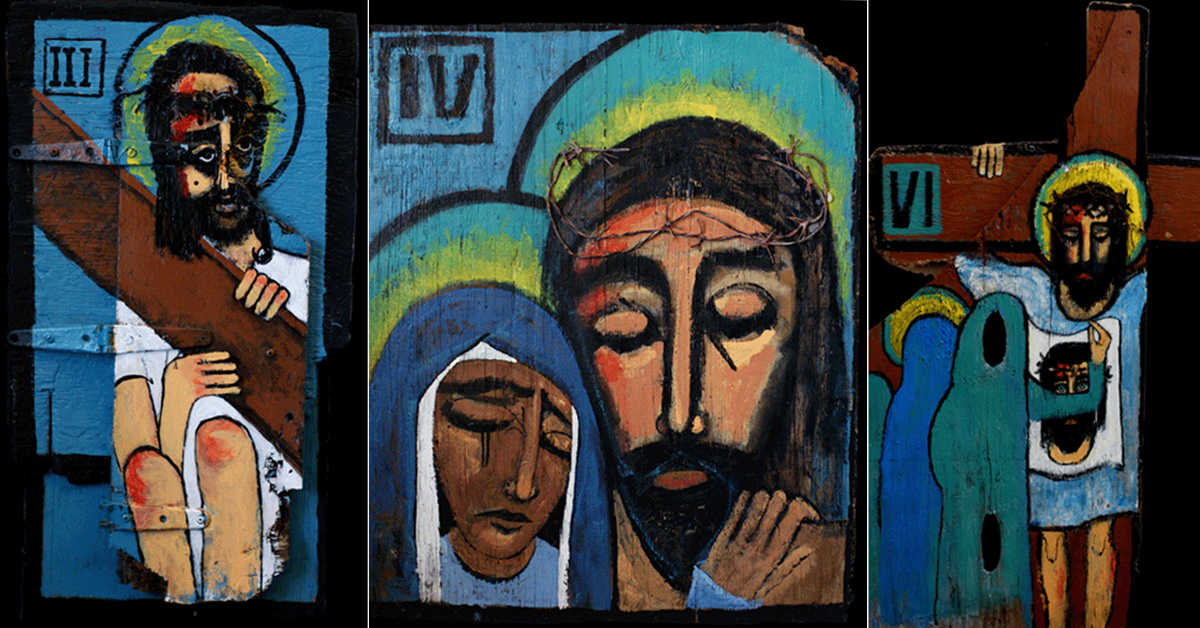 Claudel’s words narrate the story for us:

On the way!  Victims and executioners together
set off towards Calvary.
God, whom they drag by the neck,
suddenly stumbles and falls to the ground.
What do you say, Lord, of this first fall?
How do you find this earth which you made?
Ah!  it is not only the good way that is hard.
The way of evil is also treacherous and steep!
You do not enter it straight on;
you must learn it stone by stone,
And your foot often stumbles—
but your heart perseveres.

Direct and to the point.

It is this broken figure who is met by his mother in the next Station, no 4. The compassion and anguish of a mother for a son are expressed in the two faces painted on boards, their eyes closed in grief.

We are told that someone from the crowd called Veronica wiped his face with a cloth.

In the absence of disciples, women stepped forward to comfort the suffering Christ.

Later on the journey he is met by a group of women traditionally given the title ‘daughters of Jerusalem’. They gather at the road side, weeping and clutching their clothes just as we so often see in modern day TV news images after terrorist attacks. Sadness and sorrow expressed in a harrowing gesture.

In the Image showing the Third Fall of the Christ, Station no.9, the material composition of the Station can be clearly seen in the divided, part raised figure brought to his knees by the burden on his shoulders. 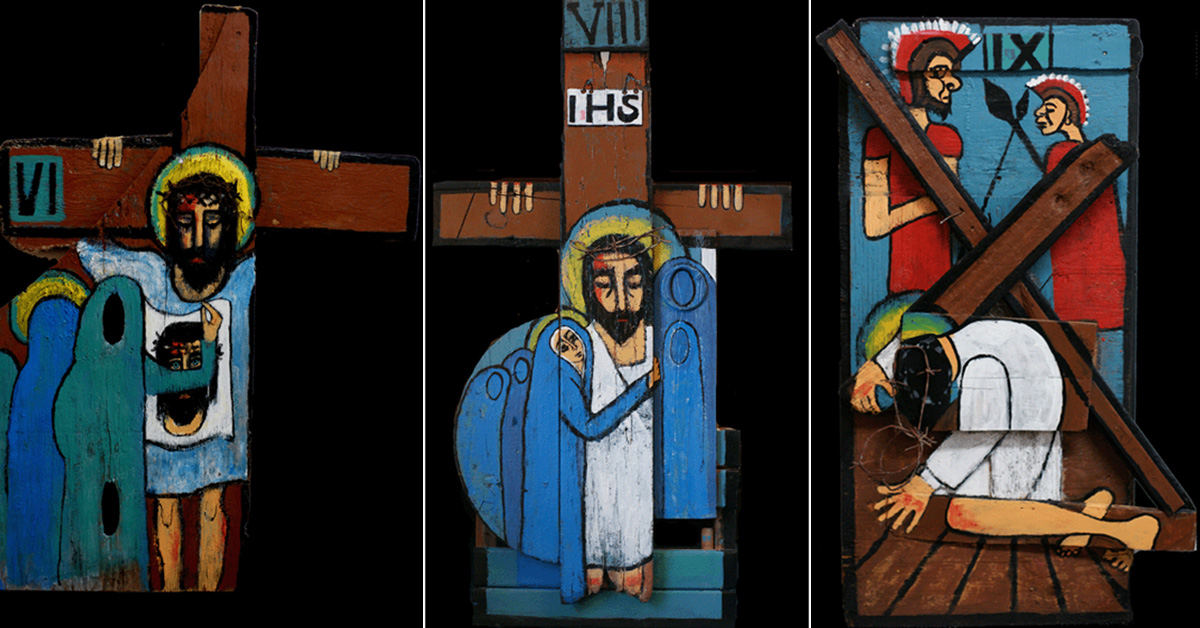 The sequence of events finishes, like the Dooley Stations, with the Station of Resurrection, the final triumph over adversity without which, as Paul tells us, our faith is in vain. This again is an event related by the Magdalene in the garden who asked the Gardener where the body of her Lord had been hidden.

The broken planks on which this concluding image is painted become the background structure for the Resurrected Lord. 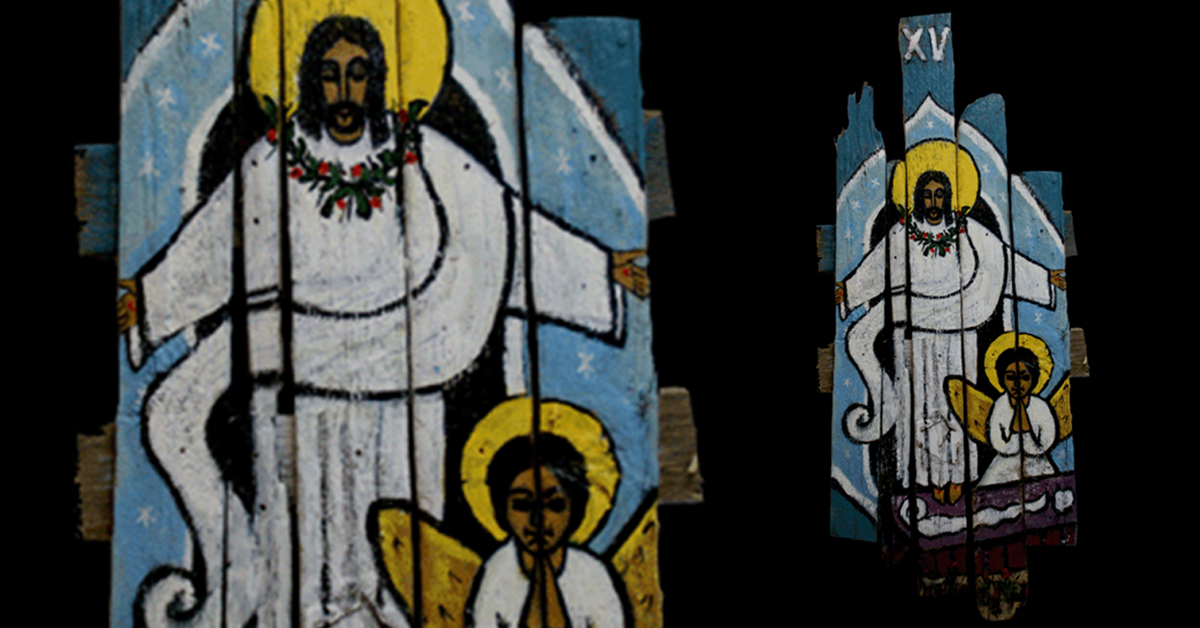 I would like to thank Maria Laughlin who photographed the Stations reproduced here and her sister Corinna who translated the text narration from Claudel’s original French and to Fr Michael Ryan, Cathedral pastor, for his generosity in sharing the Stations with me.

Do visit the cathedral site to see the complete set of Stations. They offer a rewarding experience.

Tags: Stations of the Cross