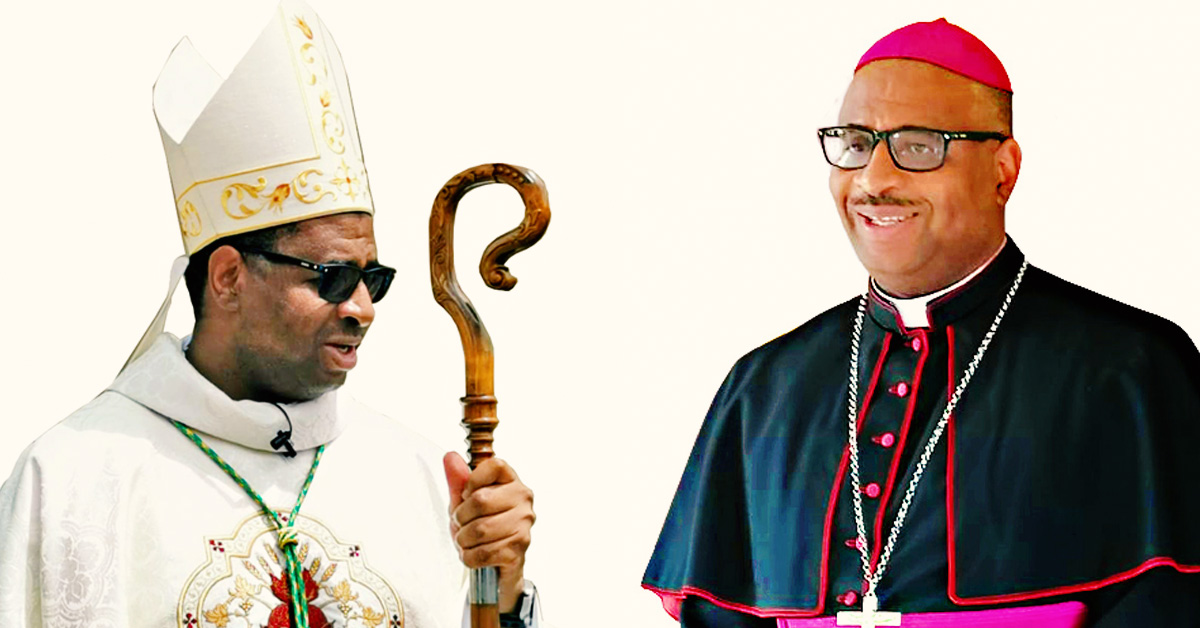 The list of converts to the Catholic faith — clergy and lay — is long. Among them have been bishops, such as Archbishop Emeritus George Daniel of Pretoria. And many years ago, he received a young man into the Church who would become a bishop himself: the new head of the Rustenburg diocese, Bishop Robert Mogapi Mphiwe. It was through a friend’s family that Bishop Mphiwe was introduced to the Catholic faith. It was, he said, “the moment I found my true home”.

Born on March 14, 1972, the 48-year-old was raised by his mother and maternal grandmother in Garankuwa township, north of Pretoria. “I grew up with little contact with my father. The only people that I had a relationship with on the paternal side of my family was my father’s older sister and her children,” Bishop Mphiwe told The Southern Cross in an interview.

Like his mother and grandmother before him, Robert was an only child. “My wish was always to have an older sister to spoil me rotten, or a little sister to look after,” he recalled. “I never cared much for having a brother.”

His was a materially deprived upbringing, compounded by his mother’s disability as a deaf person. “At home there were times when things were hard economically, but we were fortunate that we were surrounded by kind people. I do not recall a day going to bed on an empty stomach, because our neighbours were always there to help. I do not remember going to school without a proper uniform and all the required school material. The little money that we had was spent on my education. For that I am grateful to my late grandmother and my mother,” he explained.

Young Robert did all his primary and high school in local government schools. “I regret that I never got an opportunity to attend a Catholic school,” he noted. Being the only child at home, he had no choice but to spend most of his time with friends. He became close to the local Molobi family, who took him in as one of their own. “I spent most of my time with them. It is through them that I was introduced to the Catholic faith. I will always treasure my friendship with them because it was through them that I found my true home in the Catholic Church.” 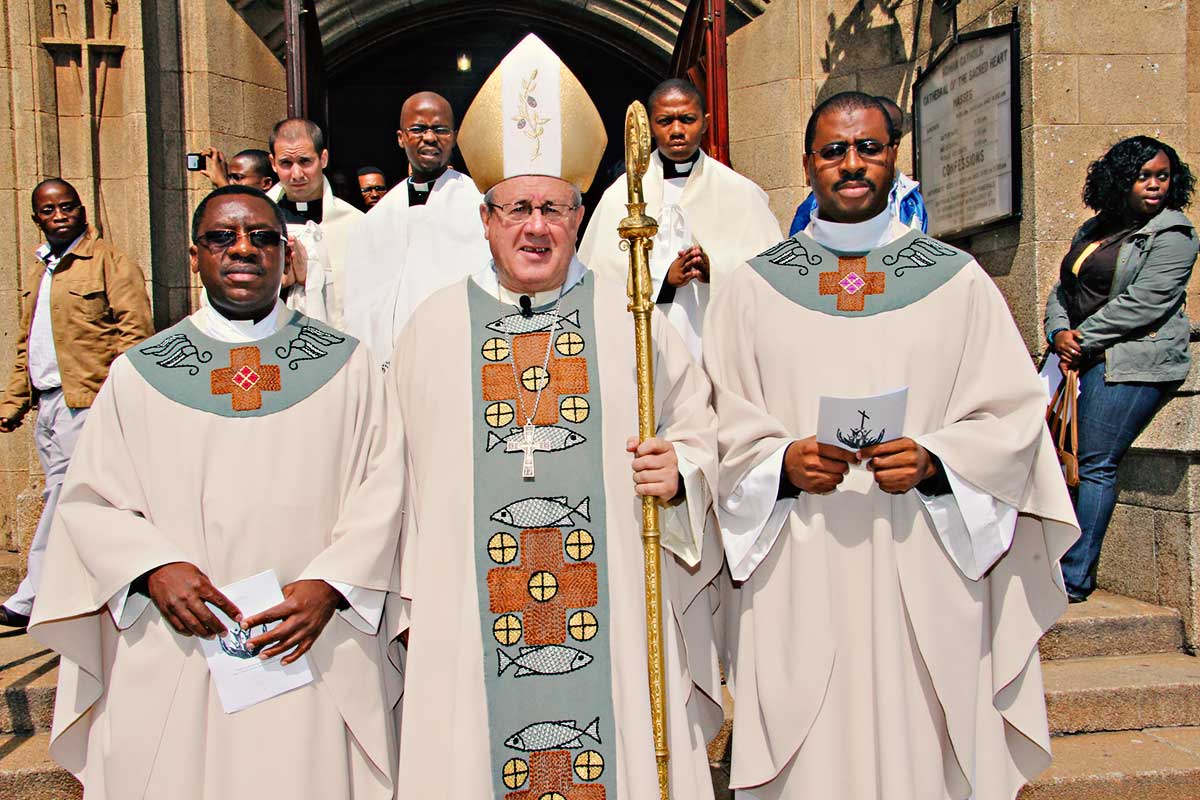 Robert Mphiwe was confirmed and later ordained to the diaconate and priesthood by Archbishop Daniel, but he was baptised by Archbishop Dabula Mpako, then still a deacon and now the head of the archdiocese of Pretoria. As a priest, Fr Mpako would become his rector in the first year of seminary formation. And it was Fr Mpako “who inspired me to become a priest”, the new bishop of Rustenburg said. “I felt drawn to him, and I spent many Sunday afternoons in his company. When he left our parish to work in the seminary as a rector, I also spent most of my holidays with him in the seminary.  I grew very close to him, and I wanted to be a priest like him.”

Another priest played an important role in his decision to become a priest: the late Stigmatine Father Michele D’Annucci. “He was so inspiring in his work, energy, preaching and creativity. As a young man I saw in him and in his fellow Stigmatine priests abundant happiness and joy in their vocations and execution of their work. Though I had no intention of joining their congregation, they were always of great inspiration and support,” Bishop Mphiwe remembered.

“Also instrumental in guiding me in my faith and throughout my seminary formation was the Congregation of the Sisters of St Bridget. During my seminary holidays, the convent was my second home. I was always welcomed with such kindness and love. A parish without nuns is missing out on so much motherly care and prayer of the Sisters,” he said. The congregation has its base in Rustenburg, so Bishop Mphiwe immediately felt at home in his new diocese.

But for all the inspiration he received, young Robert’s decision to pursue his calling to priesthood did not come easy — because he was the only grandson in his family. “It was difficult for my grandmother. Her hope was that one day I would marry and grow the family. But for my mother it has never been a big issue. I don’t remember a single day that she discouraged me from going to the seminary.”

His grandmother died during his third year in the seminary. After her funeral, some family members pleaded with him not to return to the seminary. “The reasons they gave were sound. They were worried about my mother’s security. Because of her being deaf, they strongly felt that she needed somebody with her in the house. Another reason was that they felt sorry for her living all alone. They pleaded with me to stay home and start a family to give her the joy of grandchildren. I couldn’t understand the second reason because I was still young. How in the world was I supposed to provide for her grandchildren?”

In general, many of his relatives and neighbours did not understand his decision to return to the seminary. “Many a time I felt misunderstood by them,” he remembered. “But towards the end of my studies, many came around. They slowly showed interest in my studies and life as a future priest.”

Fr Mphiwe joined the chancery staff of the archdiocese of Pretoria in early 2011, under Archbishop William Slattery, and was in the office of the archbishop until 2015, when he was appointed vicar-general.

Remarkably, Bishop Mphiwe is the fourth successive vicar-general of Pretoria archdiocese to be appointed bishop, after the late Archbishop Abel Gabuza (Kimberley in 2010, made coadjutor archbishop of Durban in 2018), Archbishop Dabula Mpako (Queenstown in 2011, since 2019 archbishop of Pretoria), and Bishop Victor Phalana (Klerksdorp in 2014).

“My ten years in the chancery was a good experience, though there were days when things were hard. But I always found great support from other members of the chancery and from friends,” Bishop Mphiwe said. His greatest challenge was balancing his work in the chancery with parish work and teaching at St John Vianney Seminary. “Eventually I left teaching because I could no longer manage my time well.” 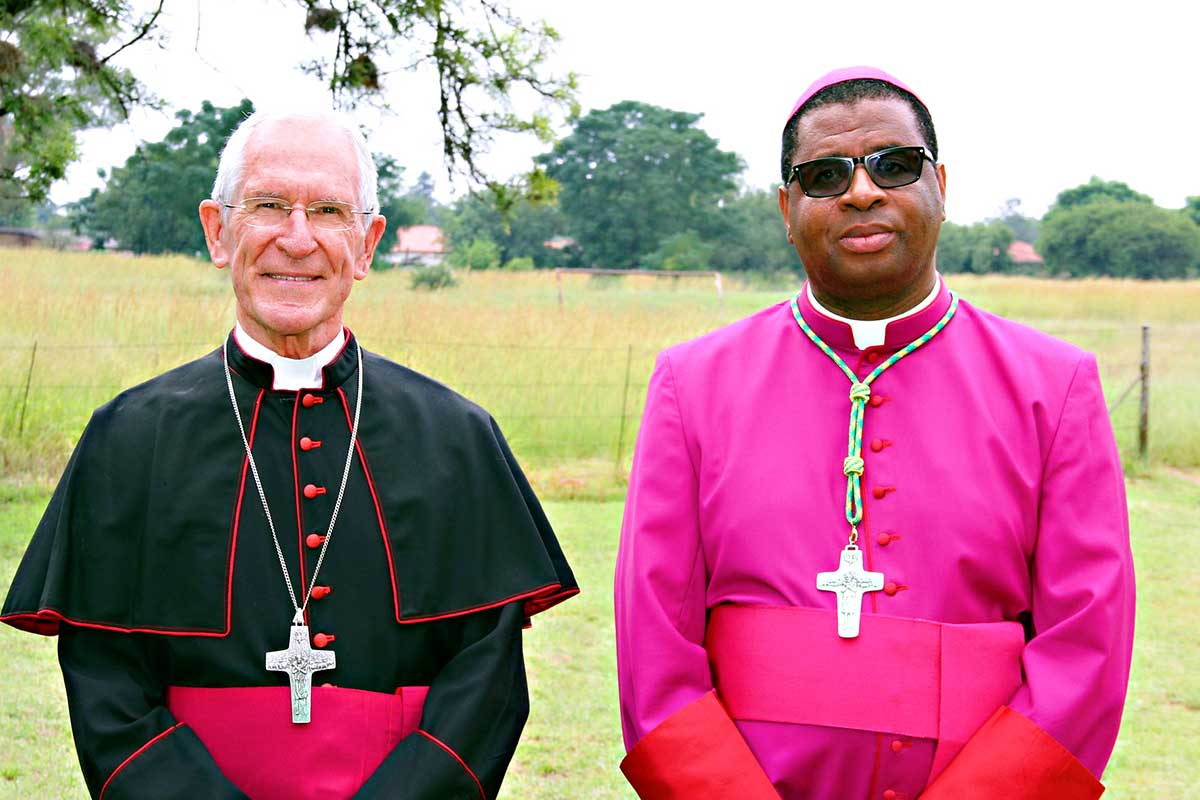 Bishop Robert Mphiwe with Bishop Kevin Dowling, his long-serving predecessor as bishop of Rustenburg. Both bishops removed their masks for this photo.

The new bishop has learned a few lessons from the archbishops under whom he served. “I have learnt that each bishop brings his own uniqueness into the ministry entrusted to him. I have learned that while expected to offer leadership and direction in all areas of the life of the Church, as an individual each bishop has his own personal areas that he wants to give his absolute best. For example, one may enjoy the area of administration while another is at home with teaching and formation. Notwithstanding these different managerial skills and styles of working, what is common is that they do all they can for the love of Christ and his people.”

A common challenge expressed by many bishops is loneliness, as people tend to treat them differently. “Loneliness is a challenge,” Bishop Mphiwe said, “but I believe that it is important to keep alive those long-term relationships that were built before the new responsibility. These are the ones that have nourished and sustained me in the past, and they will continue to do so in the future — and new ones will emerge on the new path.”

In Rustenburg, Bishop Mphiwe has stepped into the shoes of the much-loved Bishop Kevin Dowling, who had led the diocese for almost 30 years. In a 2016 interview, Bishop Dowling was asked what advice he would give a new bishop. He said: “Start off very slowly, listen deeply to your people. Allow them to teach you how to be a bishop who serves in humility and love for his people. Be patient, do not have unrealistic expectations of your people. Always encourage and support everyone in your diocese. ‘Be’ with them!”

Bishop Mphiwe knows Bishop Dowling as a kind person. “He has been working hard to make sure that the transition in the diocese is smooth. His kindness and compassion are evident in his contribution to the struggle for freedom in South Africa, especially in his constant battles with the Mangope government of the then-homeland Bophuthatswana.”

Bishop Dowling’s kindness is also evident in the care he has given to those who are affected by the HIV/Aids pandemic. “The Tapologo HIV Centre, a sanctuary which Bishop Dowling initiated, treats HIV-positive people with immense compassion and dignity. I think that Bishop Dowling’s 30 years as bishop of Rustenburg can be summed up in one sentence: Compassion for the downtrodden and the outcasts of our society,” Bishop Mphiwe said.

His immediate plans for the diocese are straightforward. “My first assignment is to familiarise myself with the priests, people, and the pastoral life of the diocese.  I need to find out, together with the clergy and the faithful, how far have they travelled, what their hopes are, their dreams as a diocese, and how we can work together to make them a reality.”

This article was published in the April, 2021 issue of the Southern Cross magazine