The First Editor of The Southern Cross 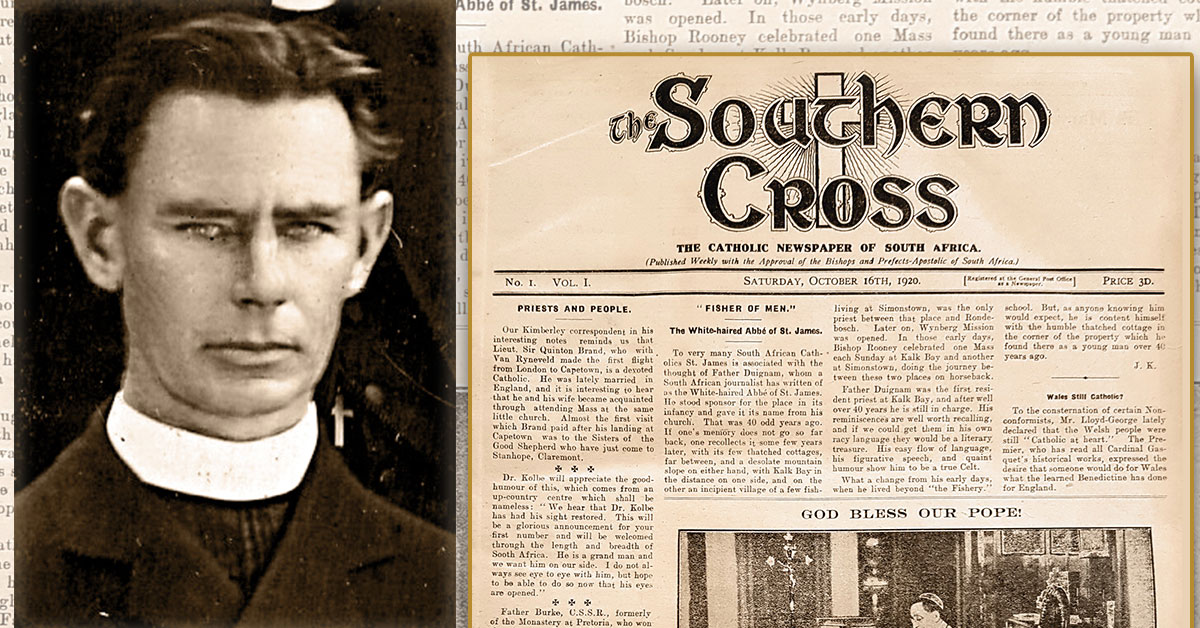 101 years ago, The Southern Cross published its first issue. Dr Sandren Naidoo looks at the life of the founding editor, Fr James Kelly.

When he parted ways with the Catholic newspaper he had led in launching less than a year earlier, he asked that in future his name not be associated with The Southern Cross. Still, a century later the same publication, now a monthly magazine, remembers Fr James Kelly, as its founding editor and as a true Irish missionary.

James Kelly was born in November 1858 in Waterford, Ireland. His brother Thomas Kelly would also become a priest and eventually the archbishop of Kingston in Canada. Their sister became a nun, and as Mother Veronica the superior of the convent of the Sisters of Charity in Tramore.

After his ordination to he priesthood, Fr Kelly’s first and only posting was to South Africa. He began his ministry in 1884 as assistant priest of St Mary’s cathedral parish in Cape Town. Over close to 50 years, he would evangelise across the colour-line in the Cape Peninsula.

In December 1886, Fr Kelly was appointed parish priest of St Michael’s church in Rondebosch, where he served until 1922. The priest’s generosity and self-sacrifice on behalf of the poor was legendary. It is believed that Fr Kelly never turned a hungry person away, even if he would have to go without his own dinner.

During the last 13 years of his time at St Michael’s he showed a zeal for spreading Catholicism across the state-mandated division by colour. He devoted many Sunday afternoons to entertaining children: white children on one Sunday and coloured the next. Fr Kelly was certainly not a collaborator in racial segregation, but like many of his contemporaries, he did not openly challenge the regime on its race relations. This is an interesting phenomenon, for the Irish in South Africa occasionally assimilated into black culture.

The Irish also seemed to find it “easier” than many other English-speaking whites to merge with Afrikaner culture. When Fr Kelly moved on from his Rondebosch posting, he found his true vocation on the Cape Flats, serving the black and coloured communities there. While in Rondebosch, Fr Kelly had already adopted the predominately coloured suburb of West London (now Athlone) as an outstation and supplied Mass there. 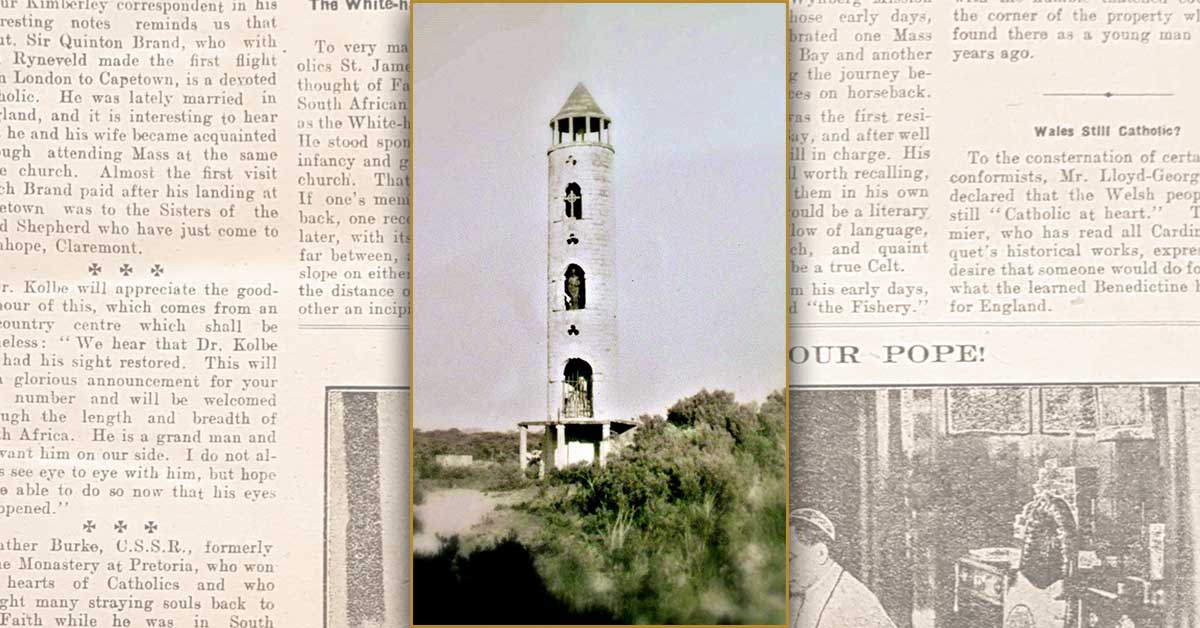 The Irish round tower built by Fr Kelly on the Cape Flats in a photo from around 1950 by Capuchin Father Jarlath Gough.

In 1922, Fr Kelly — who was not an architect and had no formal qualifications in the building trade — built the 9m-high Irish Tower, often also called the Kelly Tower, on Lansdowne Road in Philippi. The structure, inspired by Ireland’s traditional round towers, was a Cape Flats landmark for more than 50 years, until its demolition in 1978.

Fr Kelly was neither an architect, nor was he a journalist. But he was a pioneer in establishing a national Catholic weekly for South Africa, which he named The Southern Cross.

Catholic journalism in the Cape colony had a history going back to 1851, when the Eastern Cape’s Bishop Aidan Devereux, an Irishman from Wexford, founded The Cape Colonist. That publication folded in 1859, but Devereux’s successor, Bishop James Ricard, subsequently launched the South African Catholic Magazine, which remained in circulation for another 30 years. Among its editors was Mgr Frederick Kolbe, the great theologian who would also become a fixture in The Southern Cross.

The idea for a national Catholic weekly was proposed in 1919, with Fr Kelly and Durban’s Fr Leo Sormany OMI teaming up to persuade the bishops of the venture. The bishops welcomed the idea and set up the Catholic Newspaper & Publishing Company, which was to produce the weekly self-sufficiently and without subsidies.

Initially, it was proposed that a layman should be the editor, but Bishop Hugh MacSherry of Port Elizabeth feared that a lay editor might undermine priests and bishops on political grounds. Hence, it was decided that the editor should be a priest who would assume responsibility for the newspaper with the cooperation of trained journalists.

Fr Kelly was appointed editor of The Southern Cross, a title he “borrowed” from a defunct Anglican publication from 1892. The priest encouraged Catholics to purchase the newspaper by claiming that “South African Protestants will respect you South African Catholics all the more for being proud of your faith and showing your pride in it”. The first edition of the newspaper went into circulation on October 16, 1920, and sold about 3500 copies. It featured a photo of Pope Benedict XV and a papal message on the cover page.

For the first few months, the newspaper’s offices were at St Michael’s in Rondebosch before The Southern Cross moved into central Cape Town.

Although circulation was increasing, the newspaper was making a financial loss. Lacking the managerial experience of running a newspaper company, the board of directors had miscalculated the day-to-day expenses of administering a weekly publication. Due to his heavy pastoral workload, Fr Kelly requested that a permanent secretary be appointed. The board did not fully accede to his request. Instead, it authorised the installation of a telephone and bought a desk. This did not appease Fr Kelly and probably contributed further to unpleasant working conditions for the staff of the newspaper. Subsequently, work-related tensions between Fr Kelly and his assistant editor, AD  Donovan, surfaced.

Matters came to head when a letter from Mr Donovan stated his dissatisfaction at employment by The Southern Cross, “under the existing conditions”.  J Devitt, the chair of the board, agreed that the editorial arrangements were unsatisfactory, and noted that the newspaper was receiving bad publicity. The board then dismissed Fr Kelly but retained the services of Mr Donovan. Fr Kelly was offered the position of co-manager of The Southern Cross, but he declined. He edited the newspaper until September 24, 1921, after which Fr John Colgan took over. In his first editorial, Fr Colgan paid tribute to Fr Kelly.

But the founding editor didn’t go without a fight. At the end of 1921, he wrote to the board requesting his name not be associated with the newspaper in future. With the exit of Fr Kelly, the management of the newspaper progressed by leaps and bounds.

In the early 1930s, while parish priest at Matroosfontein, Fr Kelly’s health deteriorated. On April 28, 1933, he suffered cardiac arrest and died at the age of 74. He was buried at the Maitland cemetery.

Fr Kelly never returned to Ireland but kept fond memories of his motherland by building monuments, especially the Irish Tower. When asked which stood first in his affections, Ireland or South Africa, he would answer: “Why, Ireland, to be sure — but Africa stands behind her!”

Dr Sandren Naidoo is a historian, archivist, genealogist and school inspector, and the author of the forthcoming book, The Irish Anti-Apartheid Movement.