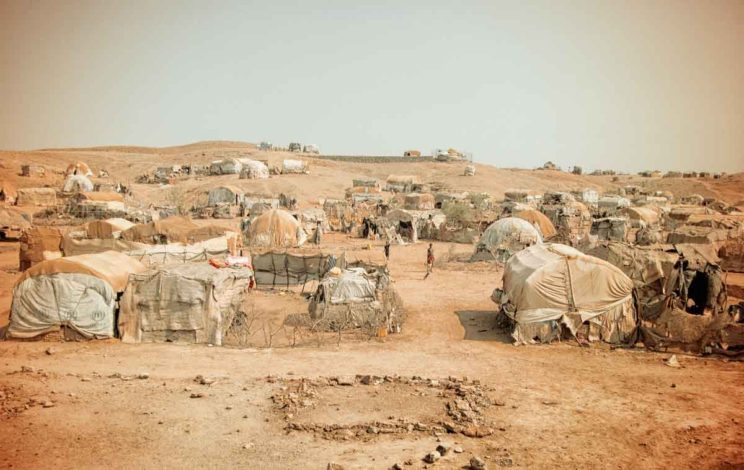 Christmas came early for me at Rhino Camp. I don’t mean in the form of tinsel or turkey or even good Scotch. Christmas came for me in human form 11 years ago, that first feast of the Nativity I spent living in a camp for Sudanese refugees in northern Uganda while working for the Jesuit Refugee Service. I think back to that time at the end of a year which has seen millions of refugees flee Syria, and when we recall that the Holy Family started their lives as refugees.

I was struggling to drive along the pot-holed tracks that pass for roads in this refugee settlement. And in the heat of the day I spotted a mother and child—made not of plaster but of flesh-and-blood.

A young woman was carrying a newborn baby. Having walked 15km to register the birth at the nearest county office, she was now starting her journey back. The decree had not come from Caesar Augustus but, like Mary before her, it was a bureaucratic intrusion into a life usually of little interest to officialdom.

For swaddling clothes, she was using the garishly coloured mixed-fibre towel that is the standard issue there, despite its singular failure to absorb much water. The towel was wrapped tightly round her waist to create a papoose that held the baby snugly on her back.

My perspective on Africa was changing since I no longer bristled at the health and safety implications of these precarious makeshift baby carriers.

I offered her a lift and as she clambered in, delighted — so too did four of her friends, each in turn cradling a tiny baby.

Five new names on the Ugandan birth register; five tiny hopes for the new Sudan. I don’t think that any one of them bore the name Emmanuel but there was no doubt, as I gazed at their innocent faces, that each was a reminder of “God-with-us”.

I drove along cautiously with this precious cargo and it struck me that, save for my own presence and that of my Hilux truck, I was closer than I had ever been to seeing what that famous birth in Bethlehem must have been like.

Our shiny Christmas cards try to show us what it was like for Mary to care for her baby 2000 years ago. But I suspect we become too absorbed by the scene’s sentimental beauty to sense the reality of bringing up a child in extreme poverty: no running water, no electricity, only the most basic foods, no doctors, few medicines — if lucky, a tiny ration of soap.

Even my nose was getting the full Christmas experience. Theologians describe the incarnation as God’s desire to enter the messiness of our world; now I was sensing how messy incarnation is.

But the miracle of Christmas does not end with Jesus’ birth. We take it for granted that once born, Jesus would grow into a full adult. But that would not have been the case for him then, and it is certainly not the case now for children in rural Africa.

Families around there don’t need celebrity campaigns to tell them that malaria and bad water unnecessarily kill one child in the developing world every three seconds—with no ceasefire for Christmas.

Like you, I have read about 20% infant mortality statistics for parts of Africa and have tried to comprehend them. But here in the car I was faced with five babies, knowing that one of them will probably not celebrate a fifth birthday.

Christmas promises us peace and joy. Even if these babies could look forward to peace in South Sudan — and the ongoing civil war there suggests they couldn’t — whether they would also have joy is more complicated.

There might have been plenty of happy smiling faces but the grinding poverty of life for most people made it difficult for me sometimes to understand their joy.

One explanation is to offer platitudes about the poor having the real wealth, and how we fail to grasp the true message of Christmas because it has become so commercialised. There is certainly no danger of commercialisation in a place where the only brand names that most people see are the ones on clothes dumped here because, though still wearable, they have been thrown out to make place in our closets for our latest purchases.

But I fear that this temptation to spiritualise poverty is just a convenient way of us ignoring the huge injustices in the distribution of wealth from which we benefit.

The poor may have a keener appreciation of the true message of Christmas, but I suspect that they would gladly give up such poverty for the chance to have their senses dulled by too much food, too much drink, or too much comfort.

But I don’t want you to think that it was all bad in the camp. The trees might not have been decorated with tinsel but they were groaning with the most succulent mangoes; we might not have had lavish office parties but at least people there didn’t need to be drunk to dance in public; and we might not have had seasonal TV delights but every night God gave us a show of stars unseen in light-polluted cities.

If, like the Three Kings, we were to follow the star, we would find that God will come to earth this Christmas in a million different Bethlehems.