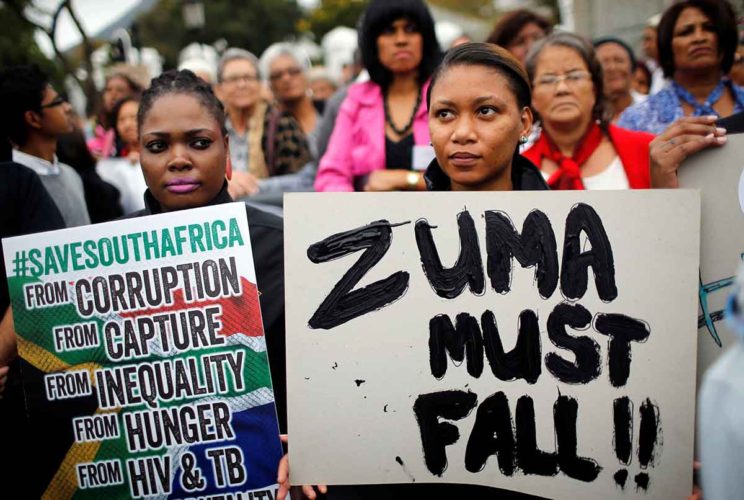 As we approach Freedom Day, South Africans may well survey the calibre of our political leadership — and descend into despair.

The African National Congress has long shed its character as a liberation movement of integrity. Even leaving aside the aggressive corruption that has infected the party since the arms deal under the Mbeki government, the ANC has relied more on sloganeering around the enemies of transformation — real and imaginary — than on actually delivering substance to the country’s poor. A fish, the saying goes, rots from the head.

The ANC has enabled the rise of a kleptocracy which has abandoned the poor. For this, the party must be held, and hold itself, to account.

A fish, the saying goes, rots from the head. A foul scent has emanated from this fish’s head for two decades now, and the ANC at large has failed to stop the decay from spreading throughout its body. We will know in December, when the ANC elects its new leadership, whether the party can make a fresh start, or whether it will keep rotting.

Meanwhile, the opposition Democratic Alliance has failed to give effective leadership in standing against the Zuma presidency.

With exasperating predictability, on every occasion when President Zuma has been vulnerable, the DA has sabotaged the opposition to him within the ANC by launching doomed-to-fail motions of no confidence and court actions, forcing the ANC to circle its wagons.

South Africans are left with only two conclusions: either the DA has chronically poor judgment, or it is acting with an obtuse cynicism that aims not to liberate the nation from Mr Zuma’s corrupt presidency but to maintain it, the better to attack the ANC at the polls in 2019.

The least imprudent leadership among the major opposition to the Zuma presidency seems to have been provided by the Economic Freedom Front’s arch-populist Julius Malema, who has come a long way from pledging to “kill for Zuma”. The protests of the middle-classes are meaningless in effecting political change if they do not extend to solidarity with the poor.

Our paucity of good political leadership is offset by a lively and committed civil society. Leaving aside concerns about the demographic composition of protest marches against President Zuma, it is a remarkable show of resolve when tens of thousands of South Africans can be mobilised to take part in peaceful protests throughout the country.

However, the protests this month revealed two critical problems.

Firstly, our civil society has failed to find a common language in opposition to the Zuma presidency. These big marches would have drawn bigger and more representative crowds had the cause for mobilisation been not only the president’s purge of opponents in cabinet with its toxic effect on our economy,  but also the government’s rampant corruption and incompetence in areas such as social services, employment generation, service delivery, education, land reform and so on.

The protests of the middle-classes are meaningless in effecting political change if they do not extend to solidarity with the poor. Indeed, it should be the poor leading the protests, with the middle-class turning out in their support.

The key to mobilising broad-based protest is to find unity among those who oppose iniquity, and then to sustain the pressure through ongoing protest.

Importantly, this also requires that such mass action is non-partisan. The Catholic bishops were among those who recognised this when they noted that Mr Zuma’s removal “would not in itself be a complete solution, as corruption at every level must be rooted out”.

That leads to the second problem: the protests were personalised, focusing on Mr Zuma (sometimes in unhelpfully immature terms), not on the systemic corruption which pervades almost all levels of government.

The targeting of Mr Zuma as an individual missed the point that a mass protest against all corruption would still demand that the head of the snake be cut off.

The Catholic bishops were among those who recognised this when they noted that Mr Zuma’s removal “would not in itself be a complete solution, as corruption at every level must be rooted out”.

Civil society must become smarter. It should draw from the wisdom of our religious leaders, many of whom were also involved in the struggle against apartheid, and make use of the network of the churches that cut across the lines of race and class.

Of course, as Christians we are also called to place our trust in God. In doing so, we must supplement our social activism with prayer — especially for the conversion of Mr Zuma and those who walk with him on his path of iniquity.