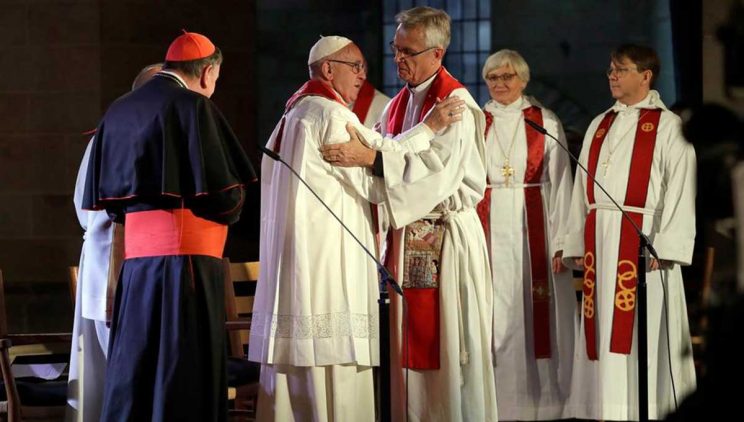 Addressing an inter-denominational service in Durban’s Catholic cathedral to mark the 500th anniversary of the start of the Protestant Reformation, Lutheran Bishop Munib Younan of the Holy Land said he perceives “an ecumenical spring”. Archbishop Hurley brought Catholics and Protestants together when he spearheaded the founding of the Diakonia Council of Churches in KwaZulu-Natal.

“There are both convergences and diversity but we share a common search for meaning in the world. And we remain certain that what unites us is greater than what divides us,” the bishop, a former President of the Lutheran World Federation, told the congregation in Emmanuel cathedral.

Surely it was God’s hand that guided this extraordinary service to be held in the cathedral where one of South Africa’s great ecumenists, Archbishop Denis Hurley, is buried.

Archbishop Hurley brought Catholics and Protestants together when he spearheaded the founding of the Diakonia Council of Churches in KwaZulu-Natal.

Many wars and persecutions followed, with Catholics and Protestants alike all too ready to attack the Body of Christ in their “defence” of the faith.

As the archbishop of Durban, he was a delegate to the Second Vatican Council which brought to an end the long winter of hostility between Christians that began with the spread of Martin Luther’s Reformation 500 years ago and continued with the rise of other new Churches.

Many wars and persecutions followed, with Catholics and Protestants alike all too ready to attack the Body of Christ in their “defence” of the faith.

Of course, the religious division was woven into the web of political machinations — the finer points of theology were rarely at the root of conflict. It was only when the Churches could extricate themselves (or were forcibly removed) from international power politics that good-faith dialogue became possible.

There was much ecumenical movement in the decades that preceded Vatican II, but it was in the 1960s that the Catholic Church committed itself irrevocably to dialogue with other Churches — in the face of some robust opposition.

Before Vatican II, the Catholic Church’s expectation was that ecumenism should result in the separated Churches — Protestant and Orthodox — uniting with the Latin Church under the authority of the pope. Clearly, the old model of Christian unity, whereby the other Churches would submit to the authority of Rome, is not feasible. The different Churches have their own structures, liturgies, doctrines, disciplines and practices

The language used for other churches was “schismatics” (for the Orthodox) and “heretics” (for Protestants). And those sentiments were freely reciprocated.

In the interim, canon law declared it illicit for the faithful to assist at or participate in any way in non-Catholic religious functions.

Since Vatican II the accent has been on mutual understanding through ongoing dialogue, cooperation between denominational lines, and finding ways to reconcile differences in theology and doctrines.

Clearly, the old model of Christian unity, whereby the other Churches would submit to the authority of Rome, is not feasible. The different Churches have their own structures, liturgies, doctrines, disciplines and practices — never mind historical resentments.

In trying to fulfil Christ’s demand “that they may be one” (Jn 17:21), the diverse Churches must settle on models of unity that make no demand of structural union.

Much has been achieved since Vatican II in that respect, but there have also been regressions, and there is a long way to go yet before a sense of harmony is entrenched. Old suspicions, prejudices and hostilities still persist among many Christians.

Vatican II’s document on church unity, Unitatis Redintegratio, noted: “There can be no ecumenism worthy of the name without a change of heart.”

There have been profound signs of that change of heart. Pope John Paul II’s interfaith meeting for peace in Assisi in 1986 provided an example of how different faith bodies can unite for a purpose. Pope Francis’ visit to Lund in Sweden in October 2016 to join Lutherans in the opening of the year of commemoration of the beginning of the Reformation had immense symbolic weight.

The crowning glory of ecumenical dialogue so far was the 1999 Joint Declaration on Justification by the Catholic and Lutheran Churches (and later by Methodists), bringing to an end a central point of theological dispute.

Other breakthroughs will surely come. Perhaps the principal challenge is to find ways by which all sacraments can be shared across denominational lines. Will we one day approach the Lord’s Table together?

It is natural that the Christian Churches have disagreements on any number of issues. But disagreements must not be the source of our division.

Despite differences, there can and must be unity in spirit and of purpose — a unity in diversity, bound together in Christ. In this way we can indeed, as Our Lord commands, be one.