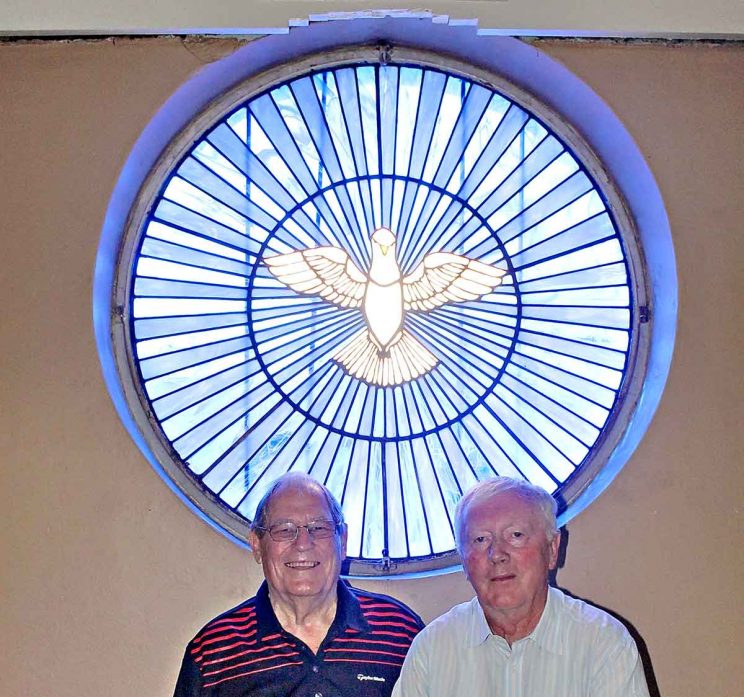 The new stained glass window at St John the Baptist church in Brakpan was made by resident and parishioner Mervyn Dansie (left). He is seen with parish priest Fr Kieran Birmingham. The dove in the window represents peace in South Africa.

A new stained glass window has been installed at St John the Baptist Catholic church in Brakpan, Gauteng, in commemoration of the church’s centennial this year.

The church was opened on June 23, 1918, and is celebrating its 100th anniversary, with different events planned throughout the year. These will include the launch of a centenary booklet on March 24, a fiesta held by the Portuguese community on June 24, and a high tea on September 1.

To kick off the celebrations, the church commissioned a new stained glass window.

Containing 209 pieces of coloured glass held together by lead frames, the window — known as “The Holy Spirit” — features a dove in flight against a radial blue background to symbolise peace in South Africa.

It was inspired by the stained glass artwork on Bernini’s altar of the Chair of Saint Peter in St Peter’s basilica in the Vatican, which depicts the Holy Spirit in the form of a dove.

Brakpan resident and parishioner Mervyn Dansie, a stained glass artist who has been refurbishing and restoring the windows at the church for years, began working on the new window in February last year. The previous window had suffered extensive damage over the years and was ready to be replaced.

To construct the window, Mr Dansie had to import glass from Mexico via a distributor in Pretoria. Each glass piece had to be cut and fitted separately into the lead framework; 132 pieces make up the inner and outer circles, while the dove itself is made up of 77 pieces.

The effect is stunning, as the interior becomes bathed in a soft blue light.

That’s certainly one way to raise a glass to St John the Baptist church’s centenary.