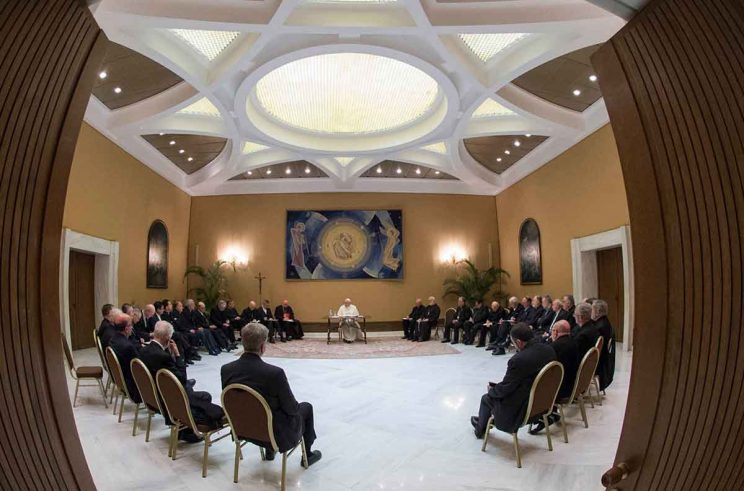 “A church with wounds doesn’t place itself at the centre, it doesn’t think itself perfect, it doesn’t look to cover up and conceal its evil, but instead places them before the only one who can heal wounds and he has a name: Jesus Christ.

In a letter to Catholics in Chile, Pope Francis expressed shame for the church’s failure to listen and defend survivors of sexual abuse at the hands of the clergy.

Released by the Chilean bishops’ conference May 31, the letter from the pope said that the time of “revision and purification” in the church was possible through the efforts of abuse survivors “who, against all hope or painted as discredited, did not tire of looking for the truth.”

They are “victims whose cries reached to heaven. I would like to once again publicly thank all of them for the courage and perseverance,” the pope wrote.

The Vatican announced earlier in the day that “the pope will send the president of the Chilean bishops’ conference a letter written personally by him and addressed to all the people of God, as he had promised the bishops.”

The Vatican also announced that Pope Francis will send Archbishop Charles Scicluna of Malta and Father Jordi Bertomeu Farnos back to Chile and visit the Diocese of Osorno “with the aim of advancing the process of reparation and healing of abuse victims.”

In his message, the pope said it has been a “time of listening and discernment” for the church to get to the root of the sexual abuse crisis in the Chilean church and to find concrete solutions and not “mere strategies of containment.”

He also acknowledged the church’s shortcomings in not listening to survivors of abuse.

In January, the pope sent Archbishop Scicluna and Father Bertomeu to Chile to listen to people with information about Bishop Juan Barros of Osorno, who, according to survivors, had allegedly witnessed their abuse by his mentor, Father Fernando Karadima.

Pope Francis said their visit was made after “verifying the existence of situations that we did not know how to see and listen.”

“As a church, we cannot continue walking while ignoring the pain of our brothers and sisters,” he said.

The church, he continued, must say “never again” to a culture that not only allowed sexual abuses to occur but also “considered a critical and questioning attitude as betrayal.”

“The culture of abuse and cover up is incompatible with the logic of the Gospel given that the salvation offered by Christ is always an offering, a gift that demands and requires freedom,” the pope said.

The pope also encouraged Chilean Catholics to continue their devotion to popular piety which is “one of the few areas where the people of God is above the influence of that clericalism that seeks to control and restrain the anointment of God upon the people.”

Like Christ, who did not hide his wounds after his resurrection but rather showed them to his disciples, the church must also be willing to show its own wounds to “be able to understand and be moved by the wounds of the world today.”

“A church with wounds doesn’t place itself at the centre, it doesn’t think itself perfect, it doesn’t look to cover up and conceal its evil, but instead places them before the only one who can heal wounds and he has a name: Jesus Christ.  By Junno Arocho Esteves Catholic News Service

Indifference and Hatred is the First Step to Murder, Pope Says